Nubia has just announced its latest flagship gaming series in China. As expected, the Red Magic 7 series brings some new innovations, including 135W fast charging and a custom Red Core 1 gaming chip. In this article, we will be discussing the key specs, features, expected price, and availability of the Nubia Red Magic 7 and 7 Pro in Nepal.

Since these are gaming devices, let’s start with the performance. Here, the Red Magic Series is powered by Snapdragon 8 Gen 1 chipset. It’s the latest flagship offering from Qualcomm and also the go-to chip for any flagship in 2022.

Nubia has paired the Snapdragon chipset with its own Red Core 1 chip, which it says will improve the gaming capability of the phones. For instance, it facilitates the 500Hz touch sampling rate of the shoulder trigger button. Likewise, it is also said to improve vibration, lighting, and sound during the games. Moving on, Nubia has deployed ICE 8.0 cooling system on the Red Magic 7 gaming series for sustained performance. For starters, it also has a nine-layer heat dissipation structure. Like last year, there is also a turbofan capable of spinning at a speed of up to 20,000 RPM.

The new canyon air duct also adds a second air inlet which the company claims will increase airflow by 35%. Likewise, Nubia has also managed to keep the core temperature cooler by 3° Celsius.

Complementing the gaming hardware on the Red Magic 7 Series is Nubia’s custom Red Magic OS 5.0, based on Android 12. The new skin brings an improved scheduler for CPU, GPU, and memory. The Touch Choreographer feature has also seen some improvements. As a result, users can expect more stable fps during games. The new improved Game Space allows users to tweak the performance of the phone and also optimize the shoulder buttons.

This is where the Redmi Magic 7 and 7 Pro start to differ. The Pro model features a 5,000mAh battery with a whopping 135W wired fast charging. The phone can go from 0 to 100% in just 15 minutes.

On the other hand, the vanilla Red Magic 7 has 120W charging. It can fully charge the device in just 17 minutes. It is not as fast as the Pro model but fast nonetheless.

Nubia will ship 165W GaN chargers with both Red Magic 7 series phones. Users will also be able to charge laptops and other devices with them.

Moving on, the Nubia Red Magic 7 Series comes with a 6.8” FHD+ AMOLED display. The display on the Red Magic 7 refreshes at 165Hz while boasting a 720Hz touch sampling rate. 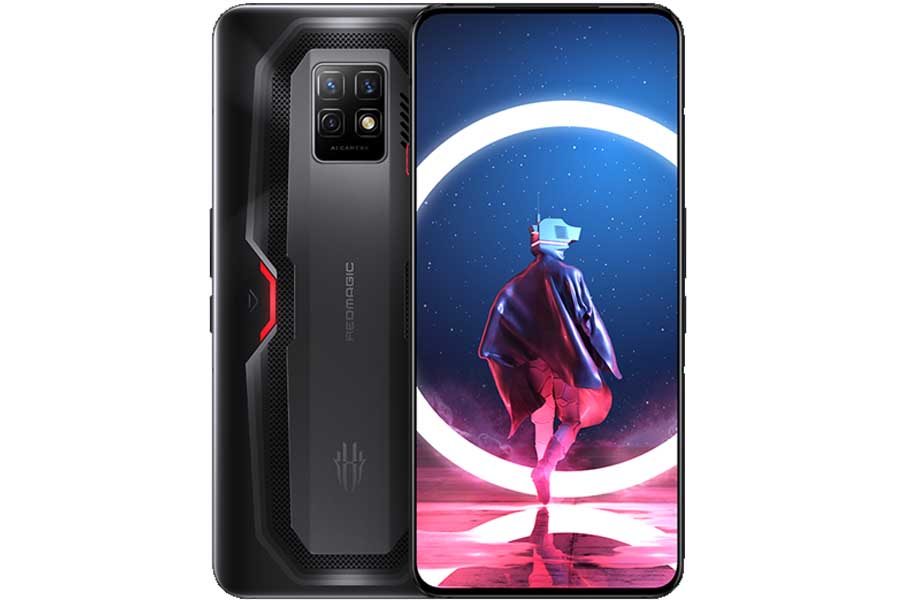 You can even distinguish the two phones just by looking at their displays. Red Magic 7 Pro offers an uninterrupted display as it hides the selfie camera under the display. This makes it the first gaming phone to have an under-display selfie camera.

On the other hand, Red Magic 7 has the selfie camera on the top bezel.

Nubia Red Magic 7 comes in three colors options. Cyber Night and Night Knight variants have RGB backlighting and breathing lights on the Red Magic logo. The logo and the lights are on the turbofan on the Deuterium Transparent Edition. The Pro model exchanges the Night Knight for a Polar Black Night option.

Red Magic 7 Series users can also buy an external Turbo Cooler for better cooling. As per the company, the cooling accessory can improve heat dissipation by 17% while also being 3dB quieter than other similar accessories.