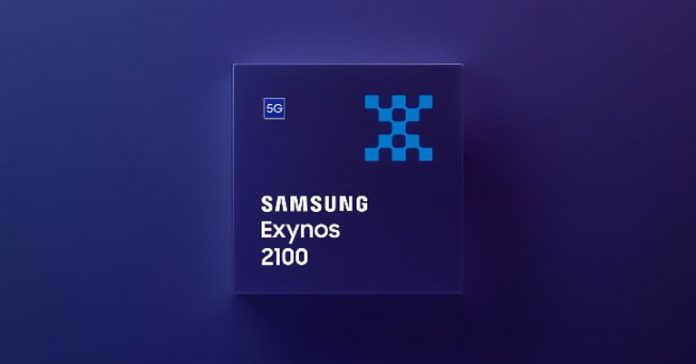 Samsung has announced its latest flagship smartphone chipset ahead of the January Unpacked event. The new Exynos 2100 will power the upcoming Samsung flagship smartphones including the Galaxy S21 series. In this post, we will be taking a detailed look at the new Samsung Exynos 2100 including its specs, features, and improvements over the Exynos 990.

Lately, Samsung has been under fire for using its in-house Exynos processors in its flagship smartphones. While it ships flagship powered by Snapdragon processor in limited markets, the phones in the global market arrive with Exynos. In numerous tests performed by independent reviewers, the Exynos variants clearly lagged behind their Snapdragon counterpart. Though the company defended its processor in the beginning, it has now admitted the shortcomings and promised a new beginning with the Exynos 2100.

Exynos 2100 is Samsung’s second chipset to be based on a 5nm EUV process node. Thus, it will have better power efficiency over the Exynos 990 that was based on the 7nm process. According to the company, the shift in the process makes the new chipset contributes to 10% better performance and a 20% reduction in power consumption.

After facing lots of criticism from the users, Samsung has finally decided to ditch its custom Mongoose cores for its Exynos chipset. The first chipset to have the Mongoose cores was Exynos 8890. The tradition was kept alive up to last year with the Exynos 990. Now, the Exynos 2100 has ditched the Mongoose cores for the Arm Cortex cores. The new chipset is an octa-core processor based on a tri-cluster architecture. It consists of one Cortex X1, three Cortex A78, and four Cortex A55 cores like the Snapdragon 888. However, the cores on the Exynos 2100 are clocked at a higher speed. The Cortex X1 core is clocked at 2.9GHz, while the Cortex A78 and A55 cores are clocked at 2.8 GHz and 2.2 GHz respectively.

The higher clock speed on the Exynos 2100 is expected to give it an edge over the Snapdragon 888, especially on multi-core performance. However, we still have to wait for real-life tests between the two processors for a conclusive answer.

Another difference between the Snapdragon 888 and Exynos 2100 is the GPU. Samsung has already confirmed its partnership with AMD for smartphone GPU for the next-gen flagship processor. But for now, the company is still using the Mali GPU provided by Arm. On the other hand, Qualcomm uses its own Adreno GPU. Similarly, there is AMIGO (Advanced Multi-IP Governor) which optimizes the power consumption during GPU-intensive tasks such as gaming.

The new NPU on the Exynos 2100 is based on a new tri-core design. Samsung has also made some changes to its architecture. Thus, the new NPU is capable of performing up to 26 Trillion Operations Per Second (TOPS). It is a significant improvement over the NPU on Exynos 990 that could only achieve up to 15 TOPS. The number is on par with the Snapdragon 888 and better than that of Apple 14 Bionic (11 TOPS). Samsung has also made some feature-map and weight compression to double the power efficiency of the new NPU. The company has said that the NPU will make some major improvements in computational photography.

Talking about photography, the ISP on the Exynos 2100 can support up to a 200MP single camera sensor. Similarly, the new chipset can support up a multi-camera setup of up to 6 cameras. Also, it will allow phones to make use of up to four camera sensors at a given time. That is one more than the three cameras that Snapdragon 888 can use simultaneously.

With the help of NPU, the ISP can recognize objects and backgrounds allowing it to better optimize the photo. For videos, there is a new multi-frame processing engine. Similarly, the new multi-format codec on 2100 can support 4K 120fps video recording and 8K 60fps playback. The process also includes an AV1 decoder for 8K videos.

Exynos 2100 is the first flagship Exynos chipset to feature an integrated modem for 5G connectivity. Last year’s Exynos 990 came with an external modem in the form of the Exynos 5123 modem. The new modem supports both sub-6GHz and mm-wave 5G spectrum.

There doesn’t seem to be many improvements in the 5G modem except for the AP being integrated into the modem. But this helps the company save space in the chip, reduce power consumption, and save money.

The hype around the new Exynos 2100 is real with Samsung using catchy phrases like “Exynos is Back”. The first phone to be powered by the new chipset will be the Samsung Galaxy S21 series which will be unveiled on 14th January. Has Samsung finally come up with a processor that can challenge the likes of Snapdragon 888? Have your say in the comments section.