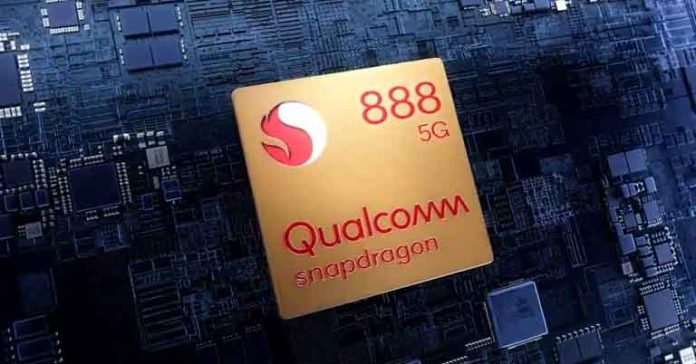 Qualcomm announced its latest flagship smartphone processor on the first day of Snapdragon Tech Summit Digital. The new Snapdragon 888 5G is the successor to the SD 865. This new SoC will be the first choice SoC for flagship Android smartphones in the coming year. In this post, we will be taking a look at the Qualcomm Snapdragon 888 processor and how it is different than the Snapdragon 865.

To begin with, the new Snapdragon 888 SoC is based on a new 5nm process node. This makes it more efficient than the SD 865 which is built on a 7nm process. However, the company has not revealed the details surrounding the architecture of the new chipset as of yet.

The major update comes in the form of the Snapdragon X60 5G modem, which is integrated into the SoC itself. Like the processor, the X60 5G is based on a 5nm process and it is the first of its kind for that matter. This makes it more power-efficient than the X55 5G modem. It is the first 5G modem to allow aggregation of mmWave-sub6 5G spectrum. One couldn’t enjoy this combined band in the X55 modem.

Similarly, the X60 also allows sub-6 carrier aggregation across FDD, TDD.  The antennas for the X60 are also said to be smaller than the previous generation. Thus, it will be less challenging of a task for smartphone manufacture to fit them in their products. Other notable features include global multi-sim, Voice over NR, and Dynamic Spectrum Sharing. The sixth-generation Qualcomm AI Engine gives Snapdragon 888 a big advantage in AI-related tasks. The company claims that the new AI engine has been built from the ground up. Qualcomm is claiming up to 26 Tera Operations per Second (TOPS). It’s a significant improvement over SD 865’s 16 TOPS. It’s even faster than Apple’s A14 Bionic which managed up to 11 TOPS.

The new AI engine is also said to be more power-efficient. It is aided by the second-generation Qualcomm Sensing Hub. It comes with a lower-power always-on AI processing.

Qualcomm claims that the third generation Snapdragon Elite Gaming feature offers the biggest leap in the GPU performance in the Adreno GPU history. As of now, the company has not any details of the GPU. However, the Elite Gaming Features bring updatable GPU drivers, a frame rate of up to 144fps, and Desktop Forward Rendering.

The Spectra ISP on the Snapdragon 888 is now 35% faster than the previous generation. That is, it can capture videos and photos at 2.7 gigapixels per second. Qualcomm also says that the new SoC triples down on computational photography. However, it did not give any detail about what it means and how it manages to do so.

Snapdragon 888 will power flagship Android smartphones of 2021. Xiaomi has confirmed that the upcoming Mi 11 will be the first phone to include the Snapdragon 888 SoC. Realme has also announced a device codenamed “Race” will equip Snapdragon 888, while OPPO will be bringing this chip in its upcoming Find X3 series as well.