Home Rumor Samsung Galaxy A41 could be dropped anytime soon The revamping of the A-series in 2019 was a sort of a statement from Samsung that it is not giving up on the budget and mid-range market segment. With the rise of Chinese smartphone brands, Samsung seemed to be losing its ground in the lower end of the market. However, the A-series and the all-new M series showed that Samsung is not done yet. The A-series became so successful that Samsung has allegedly trademarked upcoming A-series smartphone for 2021 when we haven’t even seen all of the products for 2020. Samsung Galaxy A71 and Samsung Galaxy A51 are already official and it looks like Samsung can drop Samsung Galaxy A41 anytime soon.

Leakster OnLeaks has partnered with Pricebaba to reveal the looks of the upcoming Samsung Galaxy A41. If you haven’t heard of him before – he is quite popular among the smartphone enthusiasts as most of the time his renders come out to be true.

If we look at the renders provided by OnLeaks, the front of the device looks similar to last year’s Samsung Galaxy A40 and Samsung Galaxy A40s. All of the devices come with an Infinity-U display with a tiny U-shaped waterdrop-style notch. However, this design doesn’t match with the Galaxy A51 and Galaxy A71; both of which are already official. The two have Infinity-O display with punch hole cut out at the top center of the display. The size of the screen hasn’t been specified but it is expected to be around 6-inches in diagonal length. 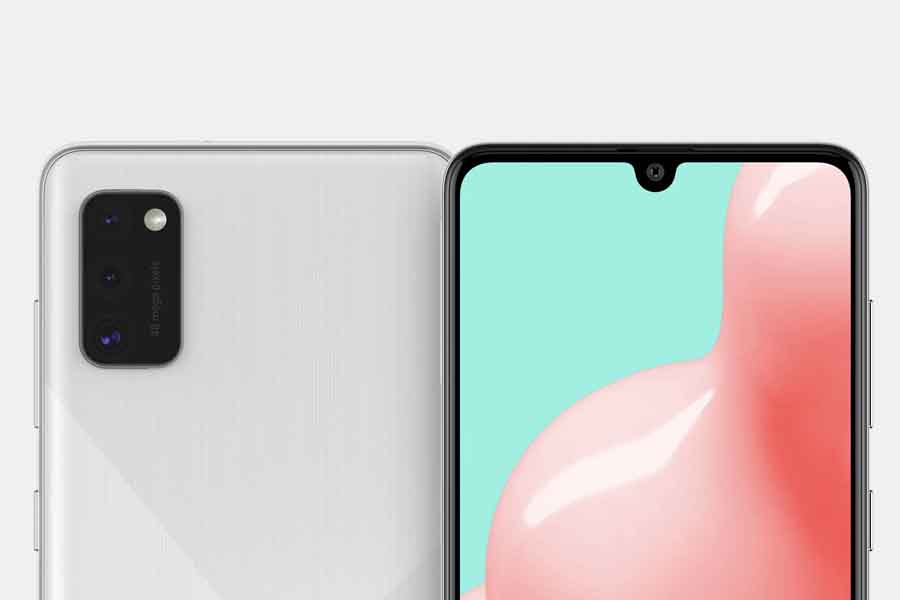 Check out our impression of Samsung Galaxy A51

On the back, the Galaxy A41 does look like the latest release by the company. It has the rectangular camera module to house the triple camera setup and a LED flash. The renders reveal the primary camera to be a 48MP sensor. Rumors suggest one of the other sensors will be a 2MP macro sensor. We don’t see any fingerprint sensor on the back which makes us believe it will come with an in-display fingerprint sensor.

Other elements are pretty basic. The power button and volume rocker are placed on the right side. The sim card tray is placed on the other side. On the bottom, we can see the Type-C port in between the 3.5mm headphone jack and a speaker grill.

The information on the Samsung Galaxy A41 is scarce. But recent Geekbench listing of the alleged device with model number SM-A415F reveal it might be powered by MediaTek’s Helio P35 processor. There will be multiple options for RAM – one of them being 4GB of RAM. The phone will ship with Samsung’s One UI 2.0 on top of Android 10. The triple camera setup is likely to include a macro sensor and ultra-wide sensor alongside the 48MP camera sensor. The device will get its juice from a 3,500mAh battery which comes with support for 15W fast charging.

Also, check out the preview of the upcoming Android 11

Give the release date of last year’s Galaxy A40, Samsung could announce the Samsung Galaxy A41 anytime soon. Even the leaks suggest the same thing. We expect Samsung to come with an “s” variant of the phone later this year.

So what do you think of the recent leaks? Do you think Samsung can build on last year’s success or will Chinese brands leap ahead of it? Let us know with your comments.

Also, check out our review of Rode Videomic NTG!