A new Samsung device has been spotted in the Google Play Console listing. The device in focus is the Samsung Galaxy Jump which is to be announced soon. However, all the details that have surfaced so far point to the phone being a rebrand of the Galaxy A32 5G that went official some months ago. In this post, we will be taking a look at all the rumors and leaks surrounding the specs, features, and availability of the Samsung Galaxy Jump.

The device was spotted in the Google Play Console listing by popular Indian leakster Mukul Sharma. The listing reveals the model number of the device to be SM-A326K. This information aligns with the previous listing of the phone on Bluetooth SIG certification.

To recall, the Galaxy A32 5G‘s model number was SM-A326B. The “K” in the model number of the upcoming Galaxy Jump could mean that it’s a special variant of the device meant for the South Korean market.

The recent listing reveals that the phone will be powered by MediaTek’s Dimensity 720 5G chipset. It will run Android 11 out-of-the-box with Samsung’s One UI 3.1 on top. The listing also reveals 6GB of RAM on board but we expect there to be an 8GB variant as well. Other specs revealed by the listings are HD+ screen, waterdrop notch, and Bluetooth 5.0. 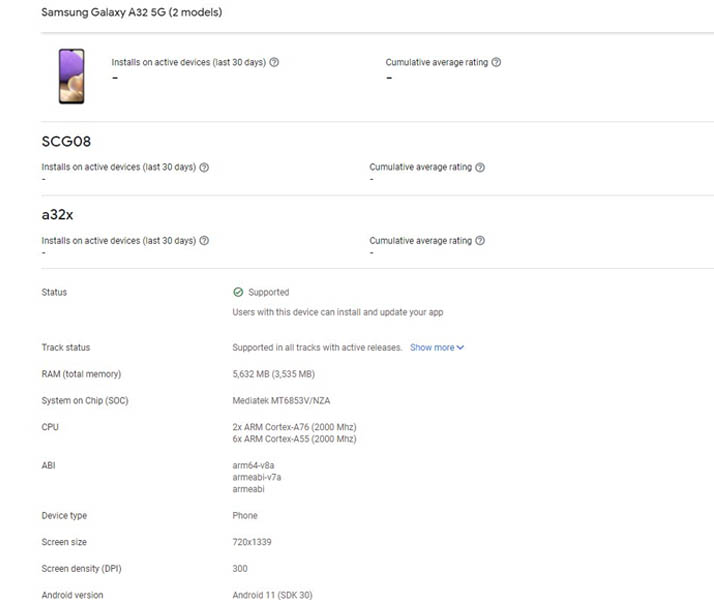 If Galaxy Jump indeed turns out to be a rebranded A32 5G, it will have a quad-camera setup consisting of a 48MP primary, an 8MP ultrawide, a 5MP macro, and a 2MP depth sensor. It will also feature a 5,000mAh battery with support for 15W fast charging. There will be a side-mounted fingerprint scanner for biometrics.

Samsung has not officially confirmed its existence but the company could soon announce the Galaxy Jump in limited regions like South Korea.