Home Apple iPhone 13 will reportedly let you make calls, send messages without a... 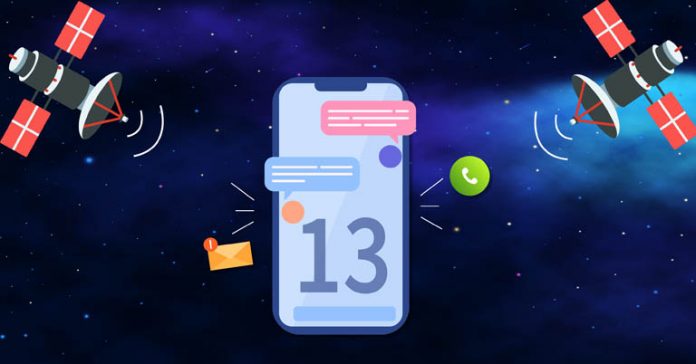 5G was such a big deal for iPhones that Apple spent a big chunk of the iPhone 12 launch event highlighting it. But it is nothing in front of the satellite connectivity that future iPhones are rumored to feature. Here, we will be discussing all the low orbit satellite communication rumors linked to the upcoming iPhone 13.

The project is back to being on front-page news, thanks to Ming-Chi Kuo. Kuo is an analyst at TF International Securities and has a reputation as a reliable Apple leaker. According to him, Apple has already developed hardware capable of connecting to satellites. Here, the company is using a custom Snapdragon X60 5G modem for now.

With this new modem in place, iPhone 13 users will be able to make calls and send texts without a working cellular network. This could be helpful for people living in remote areas. However, Apple is planning to use this feature to send SOS messages during emergencies only.

This Emergency Message tool, codenamed “Stewie inside Apple”, will be activated once users type “Emergency SOS” on the place where they would normally type in the contact’s name. However, we can expect Apple to come up with a more convenient method later on.

This feature will be integrated into the Message app as a third-party protocol, alongside SMS and iMessage. It will be operational even in Do Not Disturb (DnD) Mode.

Moving on, Apple will also allow users to report emergencies like a deadly accident using the technology. Users will have to give details like the type of accident, parties involved, and the need for a rescue team.

This feature is quite similar to Garmin’s inReach satellite communication technology that allows users to share data like messages, travel routes, and location coordinates over satellite. It is reported that Apple will be using Globalstar for its satellite network project. But whether the company will integrate the feature into iOS or launch it as a separate subscription service is unclear right now.

Besides all the benefits, this technology has its complexities. For instance, users will have to manually connect their iPhones to the satellite system to use the new feature. The process will include walking in a certain direction with the phone for over a minute.

Apple already has a working modem that it can use in its upcoming iPhones. Still, satellite communication technology won’t go live on iPhones until next year. Thus, whether iPhone 13 series will get this feature is still unknown. However, the majority of Apple products in the future will support this form of communication, including the rumored Apple Car.