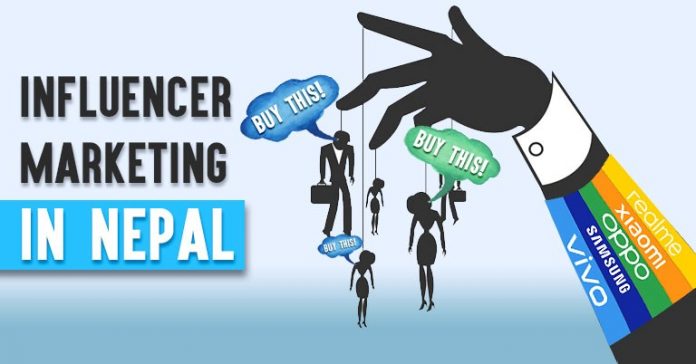 The rise of social media platforms has drastically altered the way businesses promote their products. And “influencers” play a significant role in this. The influencer marketing trend has also been adopted by different smartphone brands in Nepal.

While this isn’t inherently a bad thing, we’ve recently seen smartphone companies and influencers purposefully overselling their products and misleading the end consumers. The idea of a genuine personal opinion is completely lost while influencer marketers simply read off the pre-approved script.

The smartphone market is heavily saturated in Nepal. Thus, a simple product launch, press releases, and product reviews no longer create as much hype as companies would want. To reach a broader range of consumers, brands partner with different on-screen and social media influencers these days.

Thus, users perceive this type of marketing from their favorites influencer to be genuine and get attracted to the product he/she is advertising. Furthermore, such behavior gradually narrows consumer choices in the sense that they don’t end up even considering other available options in the market.

As a result, many customers wind up making hasty purchases. But in reality, what most people don’t realize is that influencer marketing is nowhere near as authentic as they’re painted out to be. In fact, it’s just a glorified form of paid advertisement.

What makes this matter worse is that there are no proper guidelines or regulations set by the Nepal government against such acts of deceptive marketing. On the contrary, European Union (EU), India, and other markets have set strict directives where an influencer has to explicitly mention/label the paid promotion on such content.

It’s the brand speaking behind the influencer

Falling for the brand trap due to such marketing can be risky for users. Samsung recently posted a promotional video of Galaxy M32 in partnership with Nero Gaming, where he describes it as a gaming phone—thanks to the phone’s 90Hz refresh rate.

However, 90Hz is not the only thing that improves your gaming experience. What’s laughable is that PUBG Mobile doesn’t even have 90fps mode on M32. Even high refresh rate-optimized games with 90fps support like Critical Ops, Mortal Kombat can’t go higher than 70-75fps on average.

In addition, the Samsung Galaxy M32 is a budget phone powered by Helio G80, whose better selling points are its Super AMOLED display, cameras, and battery. Thus, marketing it on such factors suits better than the gaming phone.

Likewise, Xiaomi Nepal is promoting the Mi 11 Lite as a camera phone. Nonetheless, a side-by-side comparison with the Redmi Note 10 Pro clearly uncovers a disappointing fact.

Despite being more affordable, the Note 10 Pro shoots better photos than the Mi 11 Lite. Better ones even, when it comes to nighttime photography.

In fact, the Redmi Note 10 Pro brings a 108MP quad-camera array instead of the 64MP quad-camera configuration on the Mi 11 Lite. These are only a few examples and other brands have been practicing such marketing ploys as well.

Moving on, 4K gaming, a well-known gaming video creator in Nepal, exaggerated (official video taken down) Infinix Zero 8 and Infinix Hot 9 Play‘s performance as “खतरा gaming phones”, which is quite misleading. Likewise, companies like OPPO and Vivo have built their entire marketing foundation based on influencer marketing strategies.

As TechAltar brilliantly uncovered the marketing strategies of BBK Electronics (parent company of OPPO, Vivo, and OnePlus), the former two brands’ primary tactics to promote their products are celebrity endorsement and influencer marketing.

Here in Nepal, Xiaomi and Samsung are the two biggest smartphone brands—while companies like OPPO, Vivo, Realme enjoy a decent market share as well. And of course, influencer marketing has a big hand in how that’s come to be.

Once again, we’re not implying that influencer marketing is fundamentally a bad thing. But the bigger picture we’re trying to paint is that rather than pushing for a misleading feature, such marketing practices should highlight the product’s superior strengths instead.

In addition, the influencers should stray away from misguiding their followers—rather than parroting some scripted nonsense for personal profit. Also, the Nepal government must come up with strict guidelines to prevent such acts of disloyal advertisements.

Moreover, we want our readers to be more aware of such marketing traps. One should make his/her purchase decision after watching or reading reviews from multiple credible media sources. Remember folks, as Abraham Lincoln once said “Don’t believe everything you see on the internet.”