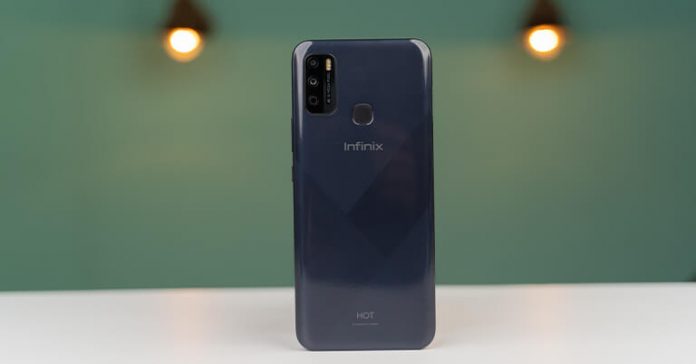 Infinix is a Hong Kong-based smartphone brand that has its foothold in different Asian and African markets. And the company re-entered the Nepali market after a long hiatus with the new Hot 9 Play. It’s an entry-level phone from the company which boasts a huge 6.8-inches display and a massive 6000 mAh battery. Retailing under NPR 15,000 here in Nepal, can this phone able to shake up the budget smartphone market? Let’s find out more about the new Infinix Hot 9 Play in this review.

Kicking things off with the design, the Hot 9 Play is a big phone. In fact, it is even bigger and wider (although slightly lighter) than the Samsung Galaxy S20 Ultra which retails for about 10 times the price. Anyways, these two devices are on a completely different spectrum so let’s not dwell on that for much longer. As one would expect, the phone has a plastic body while the rear panel flaunts a gem-cut texture that reflects different shades depending upon how light strikes its surface.

Similarly, Hot 9 Play’s rear panel has a glossy finish thus attracting fingerprints and smudges. Because of this, we highly recommend you put on a decent case on top of it to not have to wipe it down every now and then. The frame is made of plastic as well and so are the buttons. Despite this, they are clicky and responsive enough to my liking. You can find the dual SIM tray on the left side of the phone while the buttons are placed on the left.

Port selection is fairly decent as well. There are the standard 3.5mm headphone jack and the Micro USB port at the bottom for data transfer and charging. Hot 9 Play is available in either Quetzal Cyan, Violet, and Ocean Wave color options on top of Midnight Black which is what I have with me. I was more drawn to the Violet variant but with time, this option has grown on me as well. Moving on to the display, the Infinix Hot 9 Play has a big 6.82-inches TFT IPS panel. So, content consumption on such a large phone was an absolute delight… well, not so much. Unfortunately, in a bid towards pushing for big numbers, OEMs don’t really care about the complementary elements that are quintessential for a well-rounded experience. Here, Hot 9 Play’s large display features a mediocre HD+ display with a pixel density of 263 PPI.

That spec-sheet is enough to make a general assumption about the quality of the display and you’d be right. It’s mediocre or maybe worse. The tall display and low resolution are not a good combo and it really shows. Videos aren’t enjoyable as the image looks way too dull and at most times, subjects have this weird white edge to them – which is a result of the phone trying to compensate for the minuscule pixel density for such a big phone. The colors aren’t that great either although I won’t be going at length about it since that’s acceptable for a phone at this price range. All in all, don’t give in to the large display hype on the Hot 9 Play as it doesn’t paint the whole picture.

Now Infinix Hot 9 Play’s performance is quite interesting. There are different memory configurations, yes but on top of this, they differ when it comes to silicon as well. Here, the 2/32GB variant is powered by MediaTek’s Helio A22 while the 4/64GB option packs in Helio A25 instead. Our review unit features A25 too so from hereon after, I’ll be discussing Hot 9 Play’s performance based on that configuration. Using the dedicated slot, you can also expand the phone’s storage to up to 256GB which is nice.

Mobile gaming’s gotten big these days so allow me to discuss the phone’s gaming prowess first. Based on the 12nm process, Helio A25 has an octa-core CPU (compared to quad-core on the A22) with Cortex-A53 cores. Handling the graphics side of things on the Hot 9 Play is IMG PowerVR GE8320 GPU. So, I went on to try some of the popular FPS titles like Call of Duty Mobile, and PUBG Mobile Lite. The latter ran sufficiently well under Smooth graphics and Extreme frame rate. Similarly, CoD and other games like Brawlhalla ran well too. 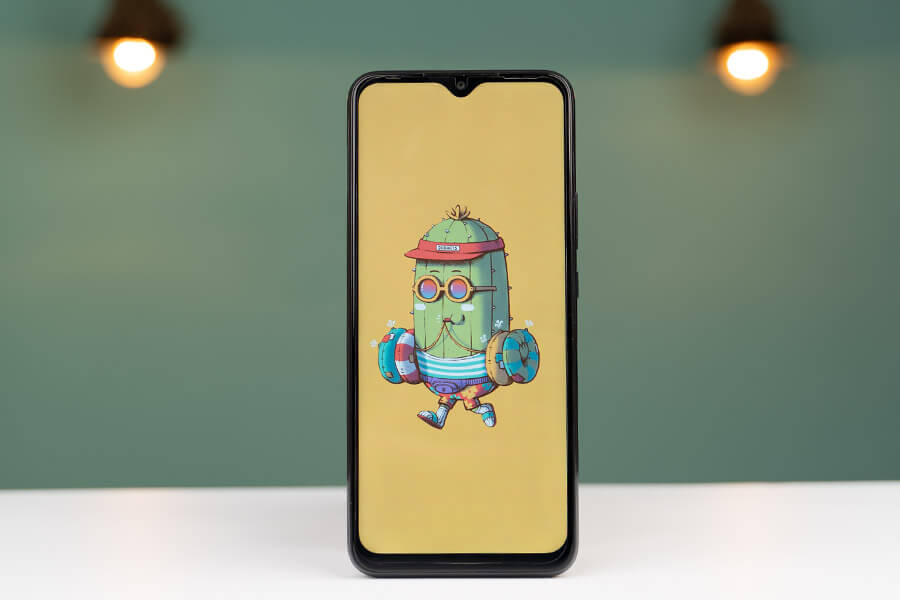 Besides gaming, other regular tasks run fairly well although I noticed how it takes a while to open apps – not just games, or other heavy apps. Hot 9 Play runs Android 10 out of the box (the 2/32GB comes with Go Edition by the way) with Infinix’x XOS UI on top. It is far from a stock Android experience with tons of customization options. Here, using XTheme, you can personalize the look of your device. The phone does come with a bunch of bloatware app and while you can uninstall most of them, some of them can’t be completely removed and you are left with the option to disable them.

Unfortunately, this is not an ad-free phone either. During my review period, I was greeted with ads from pre-installed Infinix apps like XShare and XTheme on the Hot 9 Play. To combat this, I turned off notifications from those apps altogether. Talking about pre-installed apps, there is one called “Freezer” which hides all the unused apps from the app launcher page for better space management. There’s also a Smart panel that makes it easy for you to switch between different apps, record the screen, etc. To enable this, you just need to swipe off the edge on either side of the screen.

WhatsApp users will be delighted to know that the Infinix Hot 9 Play also has a dedicated social turbo feature that includes a voice recorder, beauty mode, and other functions. In terms of security, you can find the rear-mounted fingerprint sensor. It is fairly accurate and fast for the price. There’s a face-unlock option as well which I have to admit isn’t as fast or reliable as the physical fingerprint scanner. So most of the time, I turned it off completely.

Getting to the cameras, one can easily confuse the Hot 9 Play for one with a triple-lens system. I mean, Infinix has gone out of its way to carve a lens-like circular engraving in the rear-camera module to make it look so when in reality there are only two sensors altogether. Moreover, one of them is a QVGA low-light sensor so effectively, this phone works around with the single 13MP lens.

The image from Hot 9 Play’s primary sensor is almost on par with those from Redmi 9C, Samsung Galaxy M01s, and Realme C11. They are way better than what I’d expected. The colors are fairly pleasant and with decent lighting, you can get really good images.

However, on some occasions, colors feel a little muted and unnatural. You don’t get the sharpest of images either although they’re fine for a single pinch of zoom.

Hot 9 Play also lets you take portrait images but sadly, they’re quite bad. First of all, it just blows up the ambient lighting and therefore the background elements. The edge detection isn’t good either and at times, the camera over-smoothens the subject making it look as if it has seen a touch of paint.

There’s also Beauty mode where you can play around with different filters and such. Importantly, the camera app has Google Lens embedded into it letting you quickly search for items, translate text, etc. 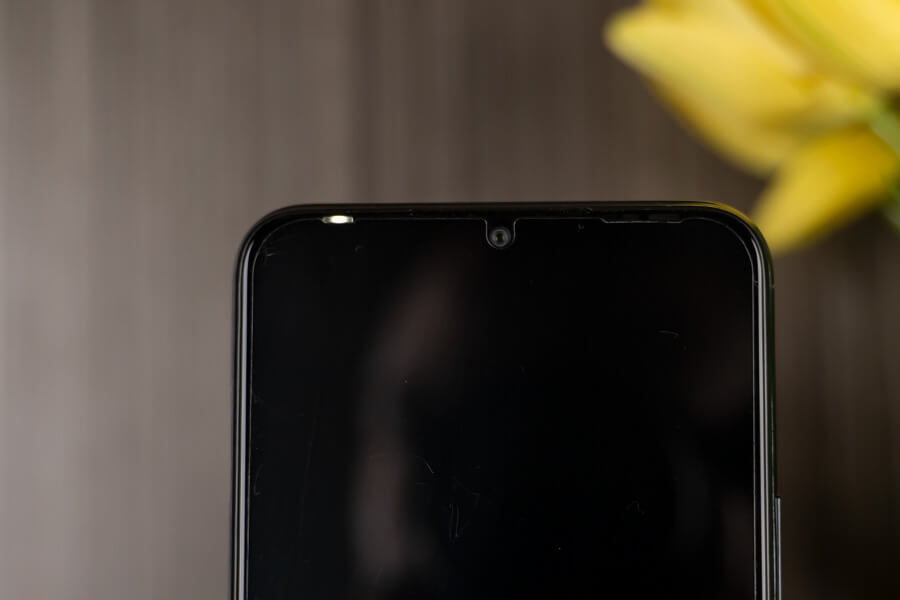 Moving on to the front-facing camera, there’s an 8MP sensor with a flash inside the teardrop notch at the top-center of the display. Interestingly, Infinix has also managed to sneak in an LED notification indicator on the left side of the notch. I have to admit it’s something I’m seeing after a long while in a modern smartphone and reminded me of the essence of this nifty little feature.

The selfies, unlike the images from the primary lens, aren’t that great. It is wildly color inaccurate as the camera absolutely oversaturates the details. Also, it fails to capture the ambient detail properly. The dynamic range just isn’t there either. With all this, the image turns out quite flat and a little unappealing.

But once again, with proper lighting, the Hot 9 Play can shoot somewhat acceptable photos. Portrait selfies are similar to the ones from the main camera in the sense that it boosts the white balance way too much and even misses out on proper edge detection.

Finally, let me talk about the phone’s massive 6000 mAh battery. And right off the bat, this may very well be one of the best battery phones in the sub-15K market in Nepal. I honestly struggled to drain it out in a day and even with the heaviest of usage, the phone easily lasted me two full days. You can imagine how long it can last under light-moderate usage. While the endurance is great and all, charging it is an absolute pain. The phone only supports 10W charging via the Micro USB port and on average, it took me about 3 hours and 40 minutes to take the Hot 9 Play from 0 – 100%. Now that’s something I haven’t seen in a modern smartphone in a long time either. Also, Infinix says the Hot 9 Play supports OTG input but my review unit wouldn’t accept it. Here’s to hoping it’s not universal.

Besides the headphone jack, you’re getting a single front-firing speaker setup which is located above the selfie camera. It’s not that pleasing to listen to. For even louder audio, there’s the DTS sound app and honestly, I didn’t find that much of a difference in the audio output with or without it.

Wrapping it all up, the Infinix Hot 9 Play is a surprisingly decent phone although it does have its undoings. The phone’s large display may attract many but will definitely notice its mediocrity after using it for a while. Having said that, if you can live with that, Hot 9 Play becomes a media-consumption powerhouse for its price.

People who watch a lot of videos, or travel frequently or students who require a larger screen space can definitely make something out of the phone. But once again a reminder, you’ll most probably need to charge the device overnight since it takes way too long to fully juice up the battery. And if you’re someone who can’t accommodate to its compromises, there are other options like the new Redmi 9C or the Realme C11.