The market of fitness bands and smartwatches seems to be growing, with the likes of Samsung and Huawei getting on them too. They have introduced various fitness bands like the Samsung Galaxy Fit and Huawei’s Talkband 5. But it’s Xiaomi who is already a veteran in this regard, with its Mi Bands. The latest of the series is the Mi Band 4 and in this review, we’ll find out if the Mi Band 4 is worth getting.

You can officially buy the Xiaomi Mi band 4 in Nepal for a price of Rs. 4,400 from Daraz. This price of Mi band 4 is for the Global variant without NFC. The first and most noticeable change in the Mi Band 4 is on the display. For the very first time, Mi Bands feature a color display. The screen is larger than the Mi Band 3’s at 0.95″ and it’s an AMOLED panel. This also means it’s a touchscreen which allows you to navigate through various features.

The colored display also means that there are now watch-faces on this thing! Of course, for a small screen such as this, that’s not very useful, but at least, it’s there if you want. You know, better to have it and not need it than need it and not have it… You get about 77 options in the watch-faces that you can set from the app. And to be honest, none of them are very good looking. But maybe, they’ll add a few more interesting ones in the near future.

Also, the display has a 2D curved glass protection, and it protects against daily wear and tears. But the complaint I have on the display is the huge bezels – it kind of steals the charm away. Since the band is as small as it is, the bezels look unpleasant!

But then again, I’d like to commend them on working on the brightness part. History is a witness that past Mi Bands were not usable outdoors or well-lit environments. But this time it’s bright enough to be usable at least. It’s still not as bright as I’d prefer, but there’s an improvement, which I have to say so.

On to the design, it’s safe to say that there haven’t been any changes from the Mi Band 3. It follows the same design language – an elliptical device with a silicone strap that clips easily. Only this time, you get multiple colors options to choose from. But our unit was the regular black, which, frankly, is boring. 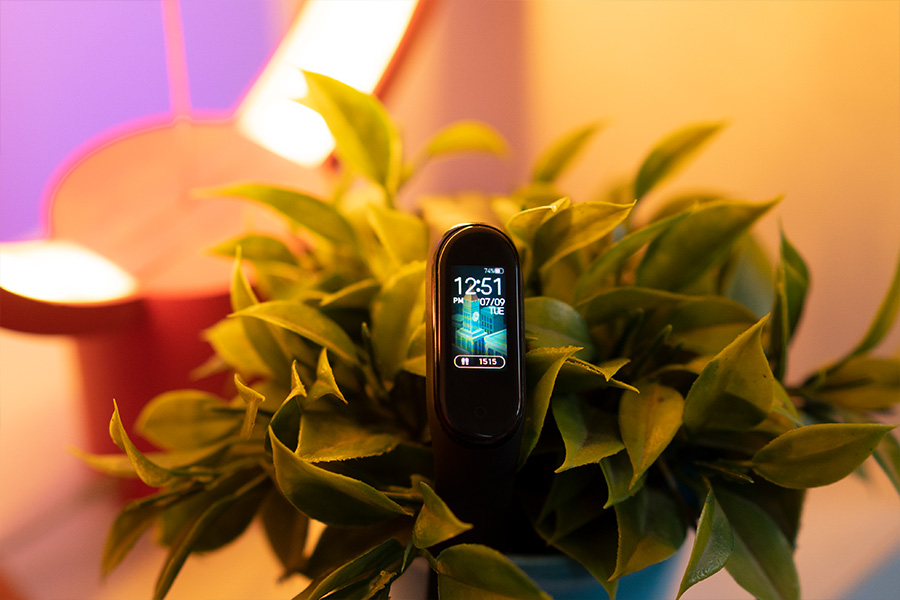 However, the band is light and very comfortable on the hands. And it’s easy to forget that you actually have it on. The silicone strap is easy to put on – simply clip it on, and it stays there. You don’t have to worry about the reliability of that either, in my 15 days of usage, it never fell off unintentionally.

The Xiaomi Mi Band 4 features a lot of improvements over its predecessor. The aesthetics might be the same, but there is various kind of small improvements. Sure it isn’t the most comprehensive health monitoring device, but you cannot ask more than what it offers for the price, either.

There’s a Heart-Rate Monitor, just like on the Mi Band 3. Also, it’ll keep track of your daily activities like running, walking, cycling, etc. In addition, there is something called the Six-Axis-Motion-Control-Sensor, which will make the tracking of activities more accurate. And this helps even while swimming. The Xiaomi Mi Band 4 can monitor moves like Freestyle, Backstroke, Medley, etc. And so, it’s also 5 ATM Water-resistant. 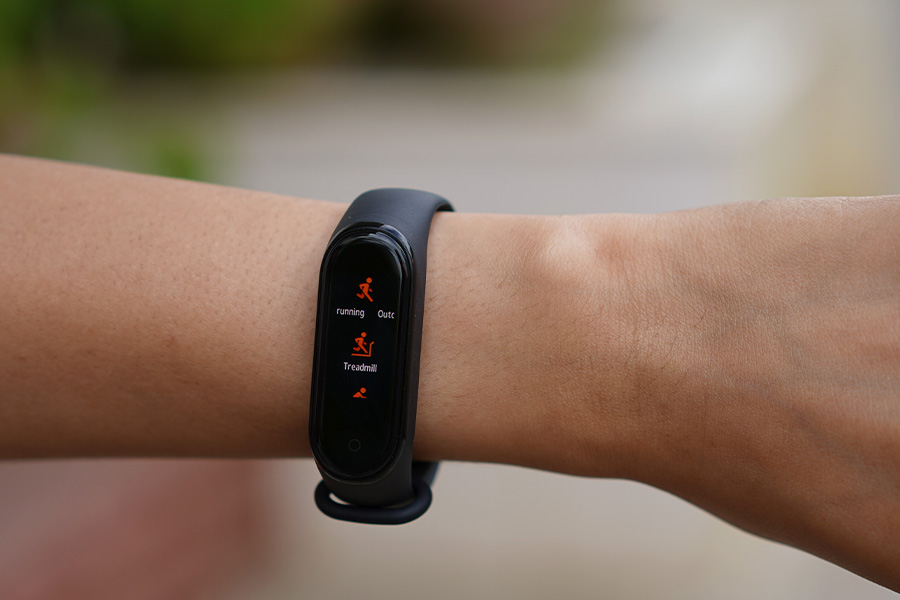 Furthermore, the band can also detect some sports activities like Football and Basketball. Plus, there’s sleep tracking on the device as well. However, it only does the basics – won’t give you the full-fledged activity report as on some other devices like the Galaxy Watch.

As for other features, it works like any other fitness watch out there. You get the standard clock on the home screen. Swiping up / down cycles through the features: Heart-rate monitor, step counter, settings, and others. You can also control the music player on your phone by swiping right. But of course, all that is enabled only after you download the Mi Fit app on your phone and sync your Xiaomi Mi Band 4 with it.

After that, you’ll also be able to get notifications on it, change watch faces as aforementioned, check your daily activity logs, etc. Also, it lets you compare a set of data with your previous records. The app is also simple enough to use – the UI is very simple, and getting around it is no hassle.

The connectivity on the Xiaomi Mi Band 4 is another one of its improvements. It comes with Bluetooth 5.0, which promises a more stable and faster connection. The distance is still 10 meters, though, so, I won’t be impressed until they can extend it to at least twice that!

As for the battery, the Mi Band 4 packs a 135 mAh battery, and it lasts really long. For instance, it had about 43% charge when I first got it. After 10 days of use, it still had about 3%  left – and that’s an insane amount of battery life. Of course, I turned the continuous heart-rate monitor off for that, but still, this is a long-lasting battery. And so, when they say that it can deliver 20 days of battery life on a single charge, I believe them.

To sum up, the one thing I didn’t like about this band is its design. It’s gotten stale with the same design language repeating itself since the very first generation.

But all the other things are very likable. From the design to display to added functionalities and the battery life, it is a huge improvement. And the best thing is, it has tried to provide a lot of features for better user experience while being very affordable. But that being said, if you’re a Mi Band 3 user, I don’t really see a good reason to upgrade to this one. Because, besides the color display, it keeps most things very similar in terms of features. However, since it’s cheap, upgrading won’t really cost you a fortune, either. But if you’re coming from older Mi Bands, then, jump on the bandwagon.

Also, if you’re new to the world of fitness bands, the Xiaomi  Mi Band 4 is a good place to get started. It costs about CNY 169, but international prices are quite expensive at £35 for the base variant. The NFC variant isn’t available outside China.