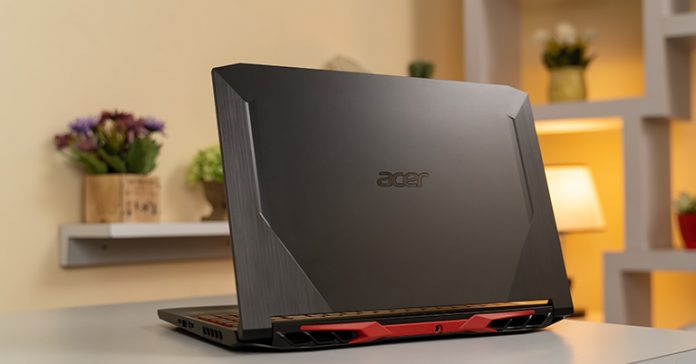 Acer’s Nitro 5 has consistently ranked among the best budget gaming laptops. We were hugely impressed with the 2019 model. It had great internals, a sturdy design, and offered great performance. But what about its 2020 model? Well, that’s what we are here for. Today we bring you the review of the Acer Nitro 5 2020.

Let’s begin by talking about the configuration option. Our test review comes with an Intel Core i5-10300H processor, 8GB RAM, NVIDIA GTX 1650 GPU, and 256GB storage. Variants with AMD Ryzen 5 processor and RTX 2060 GPU are available in the international market. However, the one we have right now is the only one available in Nepal at the time of writing this review. And it is available for NPR 112,000. Anyway, the configuration that we have, suggests that the laptop should be able to run most AAA titles with ease, albeit not at the highest of framerates. Furthermore, other CPU-intensive tasks should not be a problem either. However, limited storage does pose a problem. So, how does it all add up to? Well, we will have to dive deeper into our review of the Acer Nitro 5 2020 for that.

A major design change can be seen on the lid of the laptop as compared to that of the last year’s model. Gone are the clean looks from the lid. Instead, you’ll now see angular indents on either side of the Acer label. And it gives the laptop a more aggressive look. The central part of the lid is made up of plastic and has a glossy finish. The sides, however, are of faux-aluminum. Despite comprising mostly of plastic, the laptop is quite sturdy. There’s very little screen flex and the overall build quality is quite decent. Oh, and they have changed the color of the hinges too. They are now black too. So, that means that the entire shell barring the rear vent is now black. Sticking, to the vents, there are a total of 4 vents on this device. Two of them are on the rear and you’ll find one on the right-hand side and the other on the left-hand side.

The glossy finish of the lid extends inside as the keys and the palm rest also get the glossy finish. There are sharpish edges towards the corner of the palm rest and they really hurt your wrist while you use the keyboard. I had many incidents when my hand accidentally brushed-off around those corners… and it did sting my hands. So, you’ll have to be careful about that.

The bezels get a matte finish as compared to the glossier keyboard deck. They are a bit thick, but you won’t be troubled by them. There is a 720p webcam at the top and it is average at best. And in the middle, is your 15.6-inch 1080p screen, which we will talk about in detail in a little while.

Port selection is quite good. The power adapter is now on the rear side in between the vents. All of the other I/O ports are on either side of the laptop. On the left side, you’ll find 2x USB Type-A ports, a 3.5mm headphone jack, a Killer Ethernet port, and a security lock. Similarly, on the right-hand side, there’s an HDMI port, another USB Type-A port, and a USB Type-C port.

The device supports Wi-Fi 6, which is a welcome change in the budget segment, and one which I hope others will follow soon. Finally, on the bottom, you’ll find some air vents, speaker grills towards the edges, and four rubberized stands. Red and black are the staple colors of the Nitro 5 series, and they have retained them on the keyboard. Acer has gone a step further this time and added the red accent to the side of the keys too. And the WASD keys are further highlighted by extra contrast.

Now, a pricier keyboard with 4-zone lighting is available in the international market. However, that’s not the case out here and thus, you’ll have to make do with a uniform red-lighting one as mine. It has 4 levels of brightness and can be adjusted by pressing down the Fn button and either F9 or F10.

It is a full-sized keyboard with a Numpad and a dedicated key for the NitroSense app. The keys have a travel distance of 1.6mm and you’ll feel the satisfying bump when pressing down. However, you have to really press down upon the keys while typing. Now, that’s not the case with my everyday laptop. Therefore, I was consistently missing a letter or two while using this laptop. The touchpad, too, receives the red accents around the border and it is a fairly decent touchpad. For starters, it does not take false inputs, so that’s a good thing. And it does not feel wobbly at all. Its overall performance is quite decent. Also, while gaming you’ll probably end up using a mouse rather than the trackpad, so you are good anyway.

Talking about the NitroSense utility app, nothing much has changed in regards to the UI. It’s simple to navigate and you can use this app to change the fan control or the power plan as per your need.

You can keep it on auto mode while you go about doing your daily tasks and switch to the Max setting while playing games. By the way, on Max settings, the fans sound like jet engines. So, unless the laptop’s really heating up, I wouldn’t recommend you to turn on the Max fan speed. You can always turn on the CoolBoost on Auto settings to optimize CPU and GPU cooling by up to 9%.

Other than the fan speed, you can also choose your power plan from the app. I preferred to keep it on the balanced mode while on battery and high-performance mode while plugged in. On the upper right-hand corner of the app, you’ll find the shortcuts for audio presets, Nvidia GeForce Experience, and the settings for the sticky keys and keyboard backlight timing.

Speakers on this laptop are nothing extraordinary. There are two 2W bottom-firing speakers on either side and they are surprisingly loud. However, audiophiles will certainly prefer using a headset that’s because the built-in speakers are thin on bass. Gamers too will be better off with a good pair of gaming headsets as the fans get very noisy.

Furthermore, you can fully utilize the DTS:X Ultra software for an immersive experience while using a headset. And it might also give an edge while playing FPS games. Coming to the display, the Acer Nitro 5 2020 has a 15.6-inch IPS LCD panel with 1920 x 1080 pixels resolution. Pricier and faster 144Hz panels have not yet made their way into Nepal. Thus, we have to make do with the standard 60Hz refresh rate.

The display is what you’d expect from a budget gaming laptop. It is rated for 300 nits brightness and my experience with this laptop suggests that it does hit that mark. However, you’d still face some difficulty while using this on a bright sunny day. So, you are better off using it inside rather than the outside.

I did notice some screen bleeding towards the side of the screen. However, the panel dimming isn’t clearly observable unless viewed from a more acute angle. So, the viewing angles are pretty good. The colors seem quite vivid. Although, while watching some colorful scenes the display did leave me asking for more. Don’t get me wrong, they are not inaccurate, but the colors did not pop out as much as I would have liked. 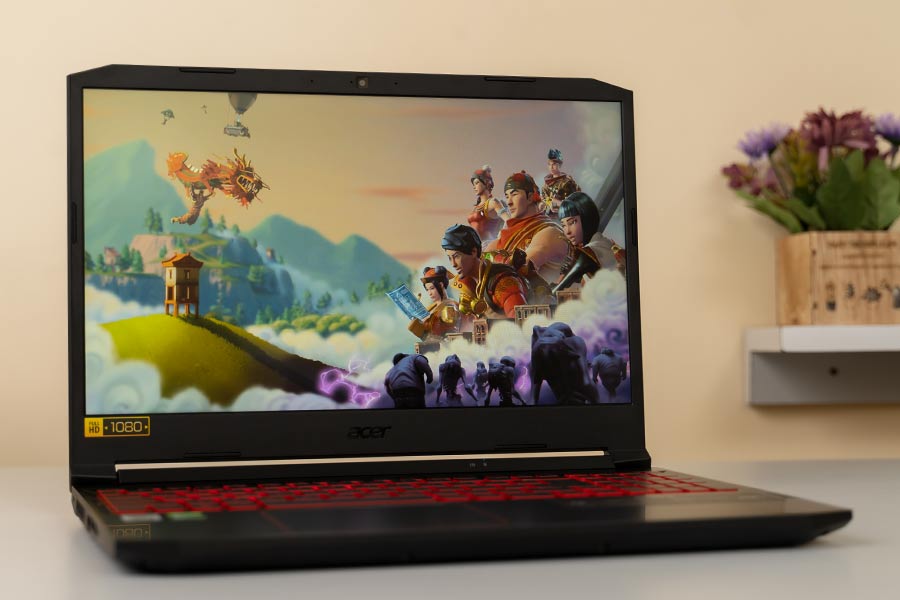 Talking about the color accuracy, the panel covers 63% of the sRGB color gamut. This is sort of an average for a budget gaming laptop. So, you can do light content creation on this one. However, for a more professional job, you’d want to look elsewhere.

The main downside of this screen is the limited 60Hz refresh rate. That means you’ll have a hard time getting anything above 60fps on AAA titles. And even if you managed to get above it, you’d probably suffer from screen tearing.

The major downside of the laptop (or better yet, this configuration) is the storage. Its 256GB SSD fills up pretty quickly. I had installed Battlefield 5 and The Witcher 3, and that’s it. The memory was already full. So, keep in mind that unless you increase the storage capacity, you’re not going to carry a game library with you on this one.

However, upgrading is quite easy, simply remove the 11 screws on the bottom, and bam, you get access to an open DIMM slot for memory expansion. Another thing that you’ll notice is that the RAM isn’t soldered in. This is a single-channel RAM and that does affect the gaming performance of the laptop. Other than the DIMM slot, there’s a 2.5-inch SATA drive bay in which you can add a hard drive. And I recommend you to add one.

Talking about the performance, simple everyday tasks such as web browsing, Netflix, and others are handled quite comfortably by the laptop. You won’t feel any sort of sluggishness while using it. At one point I had about 29 open tabs on Google Chrome and a myriad of other apps open, and at no point did I feel the laptop struggling. Furthermore, you won’t even feel the heat unless you go on a very long gaming session.

Sticking to the gaming part, as I said I was not able to install a lot of games on the limited storage. However, the ones that I did install worked perfectly. The low-end GTX 1650 is not capable of ray-tracing or so, but it does the basics right.

I got the following fps while playing Battlefield V and The Witcher 3: Wild Hunt:

So, you can see that Acer Nitro 5 2020 does not bode well with triple-A titles played in the highest settings. However, if you choose your settings properly, you will reap the benefits. The 4-cell 3320mAh battery on the Nitro 5 2020 works wonderfully. I was able to get around 11 hours by keeping the laptop in power saver mode and doing non-gaming tasks. You can easily take this laptop on a field trip where you will only use the laptop for other productivity or light entertainment tasks.

While gaming though, the laptop gives away quite soon. However, you’ll probably play games with the laptop plugged in, so it shouldn’t be that much of an issue.

Once again I find myself impressed by the Acer Nitro 5 series. It does everything that a budget laptop should do quite perfectly. Obviously, you won’t see high frame rates while playing games, but then again it is a budget laptop. One major downside is the storage capacity, however, if you can manage to extend its storage, then this is the budget gaming laptop that you should go for.