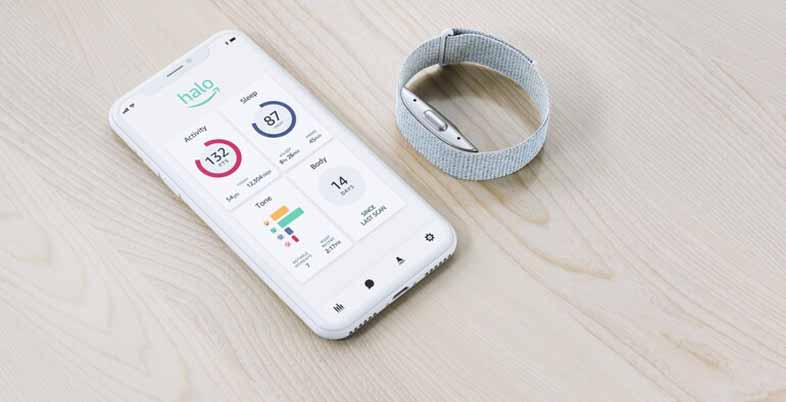 Jeff Bezos is worth $200 billion, but he isn’t done yet. The world’s richest man is now foraying into the health gadget market. This market has been growing rapidly over the past couple of years. Thus it makes sense for Amazon to get into this band-wagon. However, their new product, the Amazon Halo Band, is a fitness tracker unlike anything seen before. It comes with your regular fitness tracking features, however, unlike your Apple Watch or Fitbits, this one does not have a screen.

Yup, you read that correct, it does not have a screen of any sort. Rather, its tag along the app will use your smartphone camera to render a 3D scan of your body. And there’s an audio tracker to listen for the emotion in your voice. This deviation from the traditional fitness tracker standards suggests that Amazon is creating a niche market for itself. And more than a smartwatch or a fitness tracker, the Amazon Halo Band will be more of a lifestyle changing product. The band is not a stand-alone product and therefore comes with its own set of services. Moreover, the Halo service subscription comes with a suite of labs that will ultimately help you improve your healthy habits. So, let’s dive deeper into the features and the various services of the Amazon Halo Band.

The Amazon Halo Band looks similar to other wrist bands, barring the screen that is. This device will be available in three primary colors: onyx, mineral, and rose gold. The band includes hardware such as an accelerometer, temperature sensor, heart rate monitor, two mics, an LED indicator, and a button to toggle the mics. The mics are there for the aforementioned audio tracker. And not only does this device lack a screen, but it also does not have GPS, Wi-Fi, or cellular radio. It will use Bluetooth to connect with your smartphone. The band, including its sensors, is water-resistant to up to 5ATM. And according to the company, its battery should last for a full week.

The tone tracker comes as a part of the Halo services. It will use the microphones in the band, to assess the emotions in the user’s tone.

Basically, once you agree to use this service, the Halo app will ask you to read out some text. This is done so that the device can pick up only your voice and not the surrounding noises. After that, the band will listen to your voice at irregular intervals, analyze it, and give a judgment on things like positivity and energy. The judgment will be based on factors such as pitch, intensity, rhythm, and tempo.

However, the analysis is going to be slightly off the mark if the user has a different English accent. The Tone feature is modeled on American English, so for non-native and British English speakers, this feature might not work as expected. But hey, this is just the beginning and it will likely improve in the future.

Picking up tones and assessing the emotion certainly looks like something out of a Black Mirror episode. And at a time when people are on a high alert regarding their data, a device that analyzes their voice will certainly spike privacy concerns. However, Amazon was quick to address how they will be handling these audio data. So, basically, these data won’t be uploaded in any server at all. Furthermore, no other human will get to hear the audio. Rather, the band will directly send the audio snippets to your smartphone via Bluetooth. And they get analyzed in the app itself based on various algorithms. Moreover, the audio snippets get deleted immediately after the analysis.

You won’t actually need the band to make use of the body scan feature. You can go to the Halo app and there you’ll find the proper instructions. Basically, you’ll need to wear a tight-fitting cloth, adjust your phone on a stand and move back 5-6 feet from it. Then, the app will take 4 pictures (front, back, left, and right) and upload them to their server. There, it will combine these photos to render a 3D scan of your body, which you will be able to see on your phone itself. And the photos are immediately deleted from the Amazon servers.

The app uses ML to analyze the 3D scan and give you an accurate measurement of your body fat percentage. Amazon argues that even bio-electrical impedance that is generally used to measure body fat percentage does not give a result as accurate as the ones form these scans. 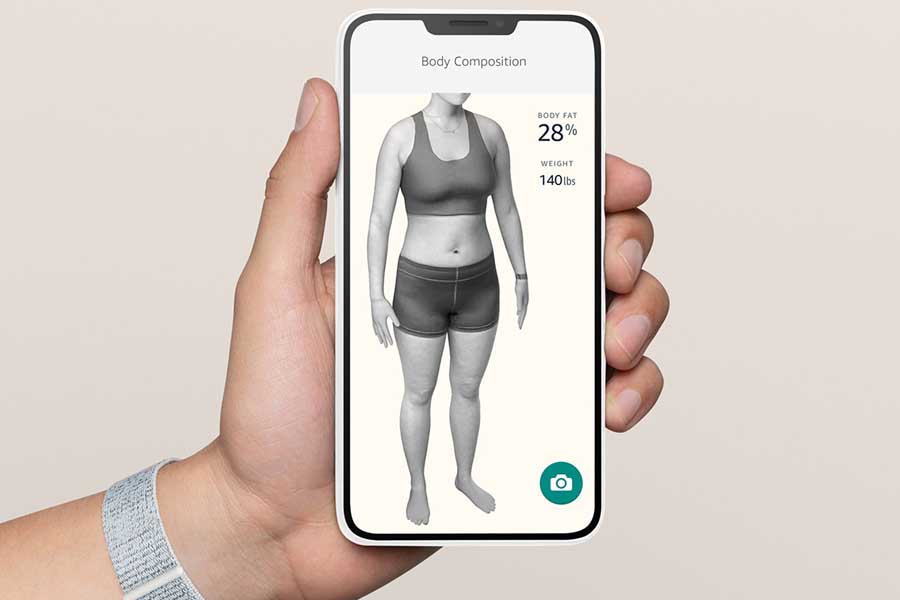 Once you get the scan result, you can use the slider to see what your body will look like with less body fat. Of course, suggesting someone what their body should look like can be problematic. Especially for those suffering from self-image issues, anorexia, and dysmorphic disorder. However, there are “safeguards” of sorts in the app. It recommends the user to only scan every other week. Moreover, the slider won’t go down to show dangerously low body fat levels.

There are multiple third parties that Amazon has collaborated with in order to create “labs”. These are the services that come in addition to the standard Halo service. For instance, the partnership with WW will allow the data from the Halo app to sync with the FitPoints system.

Similarly, other “Labs” will offer four-week health habit challenges. The data of these challenges will be shared only with specific partners and that too in an aggregated and anonymous way.

Other features of the Amazon Halo Band include cardio fitness tracking. However, that is done on a weekly rather than daily basis. Also, you get an abstracted score for steps and sleep. The band is not exactly designed to be your workout partner as you will have to manually enter every type of exercise into the app.

Body scans and Tone tracker/analyzer seem like flashy services, however, people are likely to see them as a privacy concern. I’ve already talked about how it will take care of the privacy-related issue in the Tone tracker, but let’s see what else the company had to say.

Basically, all the features are opt-in, meaning they are easy to toggle on or off. Furthermore, the company will post the details of every data and also show how you can delete them. No, humans will see your body scan images and most of the data will be stored on your local device only. And the body scan images that are initially uploaded to the server for analysis will be deleted within 12hrs.

Some of the key information relating to the privacy of data are:

The Amazon Halo Band will cost $99.99. And for services users will need to pay a subscription fee of $3.99 per month. Currently, the device has launched in an invite-only early access program. And there its introductory price is $64.99 which includes 6 months of service subscription.

The Amazon Halo band seems like a flashy device that is trying to carve a niche market of its own. However, the band comes with its set of privacy concerns which despite the company’s statement, will worry many people. Furthermore, by charging an additional subscription fee, Amazon has already placed itself on the backfoot. That’s because its competitors Fitbit and Withings offer the complete thing as a bundled package. But hey, Amazon Halo is not designed for everyone, therefore there are going to be people who will go for it. And only time will tell how far the Amazon Halo Band will go on to add the riches for Jeff Bezos.