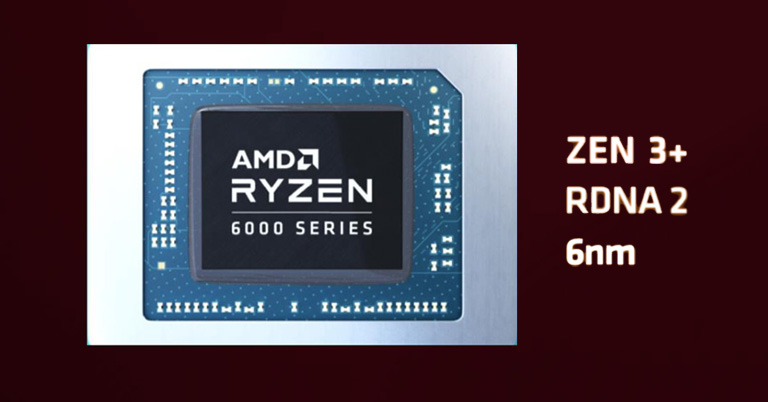 AMD has officially unveiled the Ryzen 6000 series mobile processors based on the upgraded Zen 3+ architecture during its CES 2022 keynote yesterday. The company claims that these chips can deliver up to 1.3x faster processing power than last year’s Ryzen 5000 series and up to 24 hours of battery life.

Just like its predecessor, the Ryzen 6000 lineup—codenamed “Rembrandt”—will have both the ‘H’ and ‘U’ suffixed CPUs. As you might’ve guessed, the latter is aimed at portable notebooks while the former will power gaming, creator-centric laptops of 2022. Moving on, the Ryzen 9 and Ryzen 7 processors incorporate RDNA 2-based Radeon 680M GPU with 12 Compute Units (CU), while the Ryzen 5 models feature Radeon 660M GPU with 6 CU. It provides a significant performance boost over the aging Vega graphics found on the Ryzen 5000 series.

Thanks to RDNA 2, these APUs also support hardware-accelerated ray tracing and DirectX 12 (DX12) Ultimate API. AMD claims they perform up to 2.1 times faster than the Vega GPUs and allow the majority of games to run at 1080p. Similarly, the chip-integrated AMD FidelityFX Super Resolution supersampling provides a 20-60% boost in frame rates.

AMD’s internal benchmark results of the U-series 6000 series CPUs say you can get 73fps on Deathloop and up to 114fps on Call of Duty: Vanguard with the super-sampling technique.

AMD expects to have over 200 premium Ryzen 6000-powered laptops on the market by 2022. Laptop manufacturers will announce their devices with these new CPUs during the ongoing CES 2022.