Squeezing a lot of gaming power in a slim & trim lightweight gaming laptop does come with a fair share of compromises. Also, such portable gaming laptops cost more than their slightly heavier counterparts. But at a time when the GTX models are getting price cuts, these slim gaming laptops are also available at great deals. In fact, so much so, that we think these are better than getting ones with RTX for now. To test that we got the ASUS ROG Zephyrus S – one of the slimmest gaming laptops out there, at an offer price!

ASUS claimed that this was the slimmest gaming laptop when it first came out, back in 2018. And I believe them. The laptop measures only 1.6 cm in thickness (when closed) and weighs around 2.1 kg, which is light, but there are lighter gaming laptops out there, like the MSI GS65 Stealth. But the weight makes for a better build quality, which is clearly noticeable. There’s little flex on the lid and on the chassis inside as well. 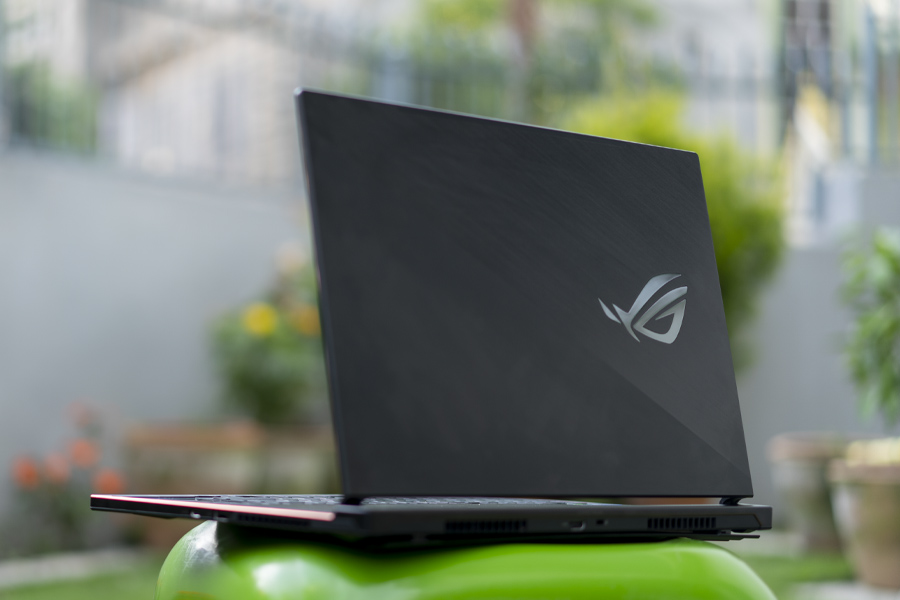 When the laptop is closed, ASUS’ boxy design shines through. I don’t know what is it with ASUS and boxy designs, but they have that flat and sharp boxed designs on most of their gaming laptops. The lid is no different – ASUS’ signature two-toned diagonal color finish makes its appearance here as well. One part is brushed aluminum, the other is smooth matte. Also, there’s the ASUS ROG logo on the side which glows slightly. In addition, there’s a golden stripe running throughout the edges of the laptop. 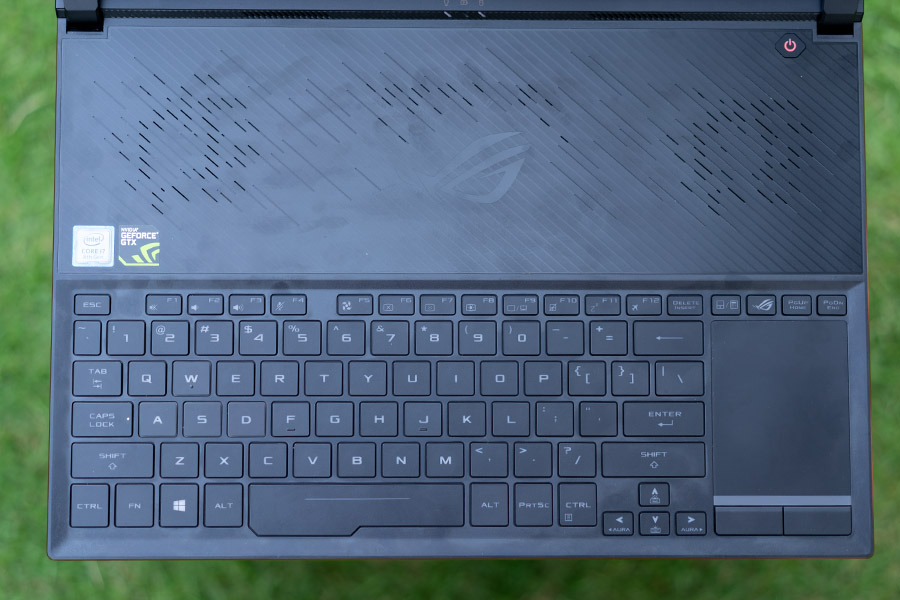 When you open it though, a slight surprise awaits. This laptop is totally different from what you usually get. The keyboard is pulled down to make a large space for the air-flow. The trackpad is also on the side, and not at the bottom. And I got confused a lot of times and my hands went under the keyboard to try and find the trackpad. This, however, is ASUS’s different approach to achieving good thermals. Also, there are smaller air vents under the lid as well, which lift up when the laptop opens. The air goes in from the top and flows out the bottom. Those small vents also glow various colors, making it look cool.

So, the design is like this: You either like it or you don’t. It is a bit difficult to get used to because confusion ensues, and that trackpad is super difficult for left-handed people. But once you get used to it, you might find it cool.

The keyboard and trackpad, as I already put it, are a bit unusual. Their positions are way off, and difficult to get used to. 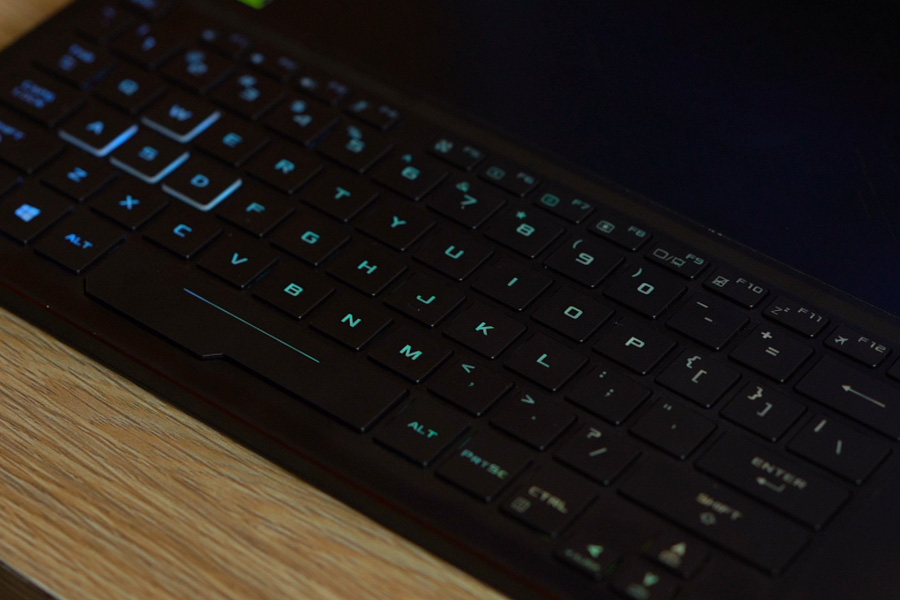 The keyboard looks small and feels that way too. Having a slim laptop means you won’t get as much key travel, so, keys feel mushy and there’s less feedback. However, the keys are well-spaced, and overall typing is comfortable. And once you get used to that mushiness, that disappears, too.

It also gets the ASUS Aura Sync RGB treatment. The keyboard has four-zone backlighting. Of course, the ASUS Armory Crate software allows you to modify the lighting effects to a handful of them. But you can also do that through the Function keys as well. Also, it has four levels. However, compared to some other gaming RGB keyboards, these feel a bit dim. The trackpad, is, more or less, the same story. It feels tiny and hasn’t got enough space for full maneuverability. But the tracking is really smooth and accurate, which helps immensely. Also, the gestures are fluid and on-point. And even though it’s small in size, it gets the job done. Plus, there are actual physical buttons on the trackpad, with tactile presses, and that adds more to the trackpad’s niceties. The only problem is it’s very small. 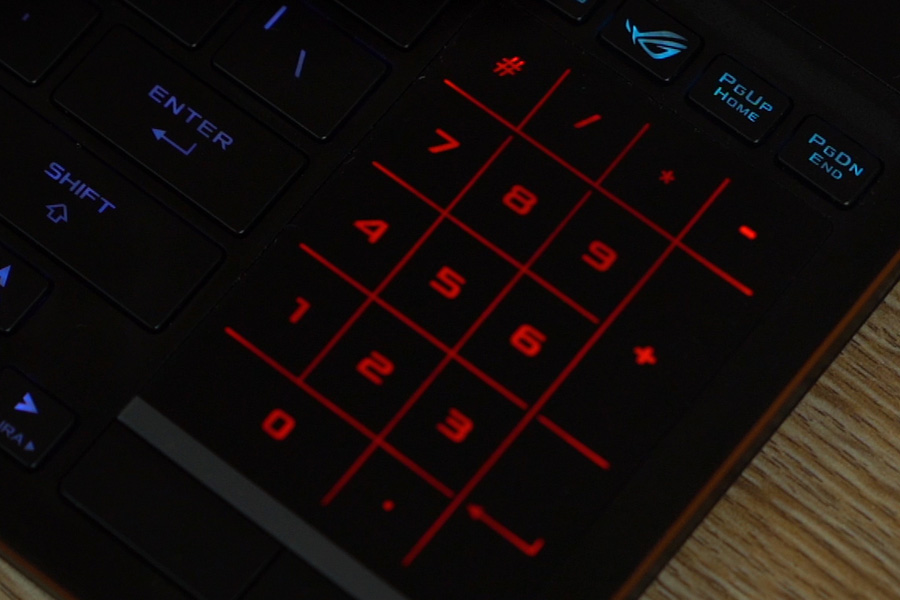 Another cool feature about the trackpad is that it doubles as a number pad as well. There’s a dedicated key to switch between the trackpad and a Numpad. In the Numpad mode, the touch keys look cool and give off a futuristic vibe. Of course, if my whole keyboard was that way, I’d get pretty mad…but since you don’t have to use it all that much, it looks cool!

The ASUS ROG Zephyrus S, being one of the slimmest gaming laptops, also has a few compromises. For instance, it lacks an Ethernet port and an SD Card slot. That can prove to be somewhat of an inconvenience. But other than that, it does have enough ports for other purposes.

You get three USB-A ports, a USB-C, another USB-C Display port, charging slot, and an audio jack on the sides. Also, there’s an HDMI and a Kensington Lock Slot at the back. So, except for the SD card and an Ethernet, it’s got you covered. But most portable laptops skip those ports, so, can’t complain.

The ASUS ROG Zephyrus S has the display of that of premium laptops. Of course, it was meant to be one, so, no surprises. The display size is a regular 15.6″ Full HD IPS LCD with slim bezels at the sides and on top. But the color production and display quality look top-notch. The colors on it are vibrant and lively, and the picture quality is awesome. Media consumption on this device is great! But what makes it even better is the 144 Hz Refresh Rate and 3 milliseconds of response time. It makes for a super-fluid display, not only while gaming, but also general usage. And that is clearly visible. 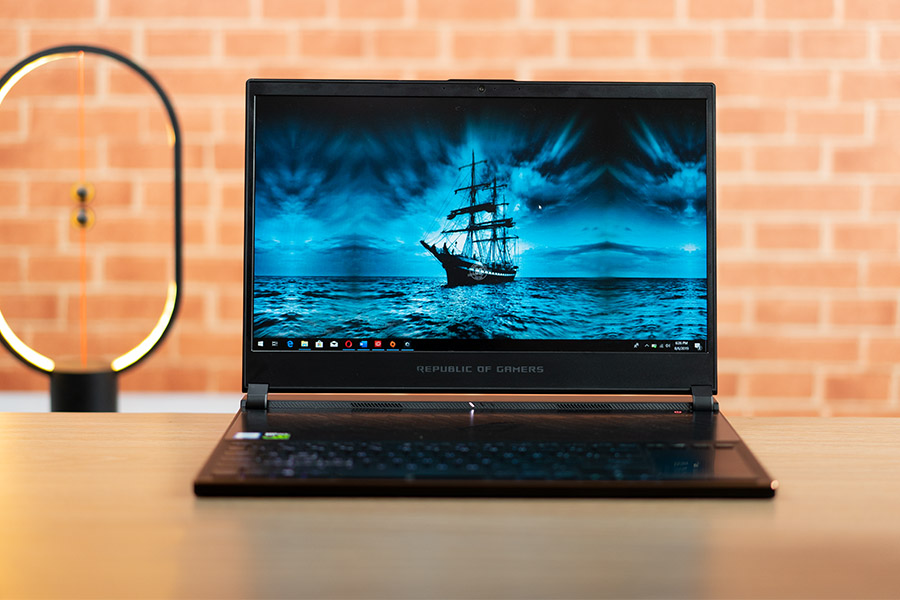 In terms of color science too, it has almost 100% sRGB, and about 70% Adobe RGB. So, display accuracy is quite good. It is also good enough for content creation and editing and stuff, so, this can be a suitable device to do that as well. The only compromise you’ll have for that purpose is getting an extra SD Card reader as it doesn’t have that port. Its brightness, at 290 nits, is also good enough, and this is more than what some other gaming laptops give you.

In terms of performance, there are no places to complain about. Since this is last year’s you actually get the 8th-gen i7-8750H with 16 GB RAM on dual-channel mode. And we know that to be a highly capable processor – just about 8-9% short of today’s 9th-gen ones. It can handle almost all kinds of tasks – from heavy editing apps like Photoshop, Lightroom and Adobe Premier. Also, some 20-30 tabs on your browser, is no sweat at all. In addition, the SSD is pretty fast, so, no complaints there, either. 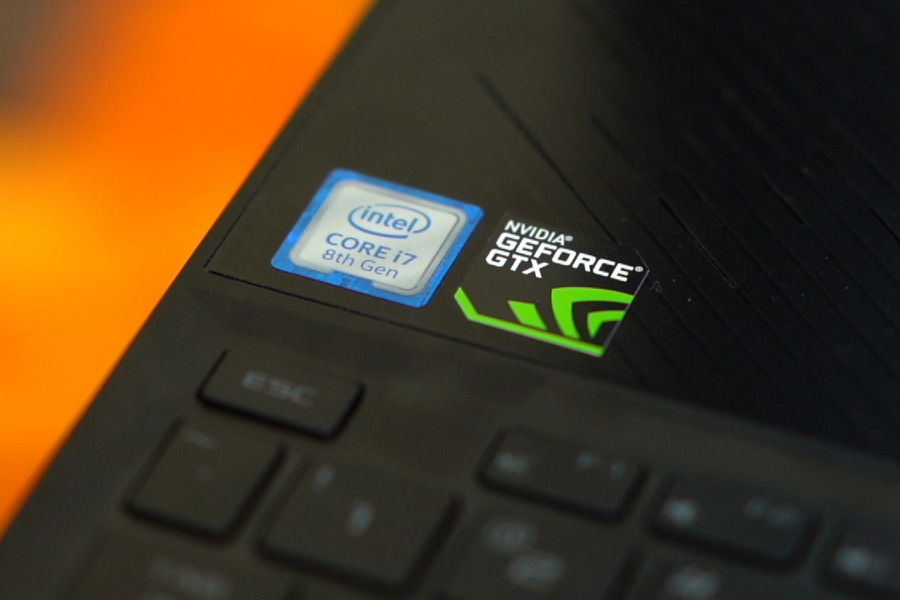 For gaming, you get the GTX 1070 Max-Q. And due to the power-efficient Max-Q, the performance is not quite there with the regular GTX 1070. But for what it’s worth, it tries hard to deliver. You get good enough frames in your high-end games. Games like PUBG give off about 70-80 fps on High settings, whereas Battlefield V goes to the same lines on Ultra. Fortnite fares a bit better, reaching up to 75-85 on its Epic settings. However, the ASUS ROG Zephyrus S has a few tricks up its sleeve. Its Armory Crate software allows you to overclock the laptop somewhat to increase performance. While overclocked, I got about 90-100 fps on Fortnite on Epic settings, which is a slight improvement. Also, there was an increase in overall smoothness of gameplay.

However, the thermals are not really its strong suit. And that is strange because the reason for this strange design of the laptop is to improve thermals. But, I faced a lot of heating issues on this one. About an hour into gaming, and it heats up so much that even the keyboard becomes uncomfortable to touch! And that creates some throttling in the games. I had instances where my games would drop to about 15 fps for a few seconds. And not only high-end games like PUBG, but this issue was there on Dota 2 as well. Only CS: GO fared without it.

Another thing I am not quite satisfied with is its battery. It’s got a 50 Watt-hour battery, which lasts only about 2.5 hours on normal usage. So, don’t expect more than 40 minutes on gaming, but of course, that would be foolish to game on it on battery mode, anyway.

As for other aspects, most of them are pretty good. Its speakers are located under the display and are front-facing. Also, the sound quality on it is fantastic. So, combined with a great display, it is a good media consumption device.

And as for upgradeability, it seems to have four slots for RAMs. The laptop runs on dual-channel by default, but if you want to add more, then, there’s plenty. So, that is not a problem, either.

To conclude, the ASUS ROG Zephyrus S is a good gaming laptop, made better by the current fall in prices of GTX models. It’s got a great design, great display, and some great performance. Sure, the thermals could use some improvement, but most portable gaming laptops tend to be like this. And since this is one of the slimmest gaming laptops out there…you win some, you lose some.

The same configuration of this laptop cost around $1900 when it first launched, which would equal to over Rs.300000 in Nepal, but right now, the price is like $1300. or Rs.220000 in Nepal. And for that money, I think it’s a pretty great deal. You’re getting the slimmest gaming laptop for that and it counts for something.

Also, this also means that you do not, right now, need to spend a lot in RTX-graphics enabled laptops. After all, there are no more than a handful of games that can take full advantage of that. And at a time like this, when GTX-enabled laptops are getting price cuts, those are better deals! So, if you want to get the ASUS ROG Zephyrus S 2018, go for it.