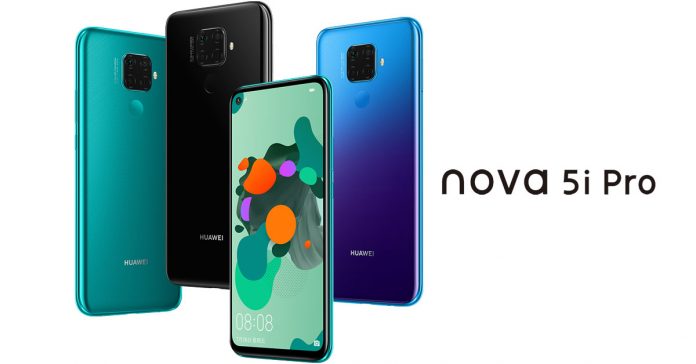 Huawei, for some reason, didn’t come up with a Nova 4i. After its huge success of the Nova 3i, we kinda expected it. But it was a no show. However, the company did launch a Nova 5i, and now, there’s even a Huawei Nova 5i Pro! There were all kinds of rumors about it, and the full specs already leaked some time ago, and now, the launch is official.

It’s just like the rumors and leaks said. There’s actually no or very less difference. The Nova 5i Pro starts out with a Mate 20 look-alike body and a quad-camera setup at the back. And below that, is a physical fingerprint scanner. The display is a 6.26″ IPS LCD Full HD+ display with a punch-hole on the left. The punch hole sports a 32 MP selfie camera, as previously leaked. Also, the Quad camera comprises of a 48 MP primary camera – a Sony IMX586 lens – found on the OnePlus 7 Pro and Redmi Note 7 Pro. Other cameras are an 8 MP ultra-wide-angle lens, a 2 MP Super Macro lens and another 2 MP depth sensor. With this many cameras, we’d have preferred a telephoto lens but the company made a strange choice it seems.

In addition, the Huawei Nova 5i Pro runs on the Huawei’s new Kirin 810 chipset. And we know about how this processor beat the Snapdragon 730 in terms of benchmark scores. So, this phone is a direct competitor to the Redmi K20.

And when it does go for sale on international waters, this device might just be known as the Huawei Mate 30 Lite. And that makes sense because it’s the Mate 30 series that will launch soon.