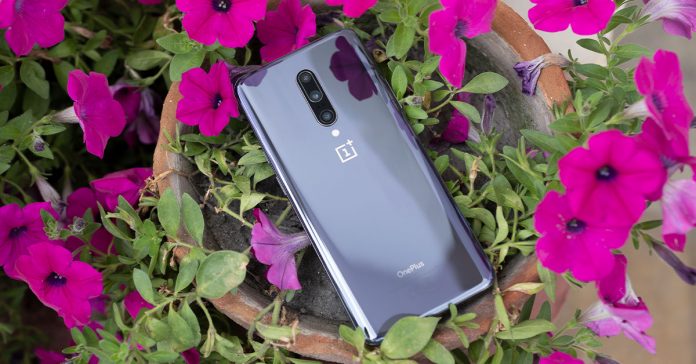 Every year, OnePlus releases a very compelling flagship phone that’s unpolished in a few areas. But that’s made alright by the prices of these phones! And it was this business model that got the small company the attention of the world. But OnePlus decided that it can do more than provide killer specs at a very affordable price. Thus, the OnePlus 7 Pro was created.

With a considerable set of improvements over the OnePlus 6T, the OnePlus 7 Pro brings a lot of new things to the table, at least for OnePlus. But this also means a major change in pricing. So, does this still make the OnePlus 7 Pro a flagship killer? The OnePlus 7 Pro design is fantastic, there’s no doubt on that front. Its glass back and curved edges, combined with the heft give it a prime look and feel. The curved edges make the frame thinner, which is easier to grip, despite its large size. And it’s almost what you’d want from a flagship in 2019…almost. Because while the big hefty design makes it premium, it is also too big for many. In addition, even though it is water-proof (which is good), it’s still not IP-rated. So, the assurance is not quite there.

The ever-so-useful Alert slider is at the right above the power button with the volume rockers on the left. And they’re a bit too far up to reach. As I mentioned, the phone is too big for most. Audio is made better by the Dual Stereo speakers – one at the bottom and one on the earpiece, but having no headphone jack is a bummer.

And yes, the pop-up selfie camera does give the phone more screen real-estate. But motorized parts are not everyone’s taste, either. It does have the safety measure to retract the camera back in, in case it drops, but it’s still a motorized part. And while I got used to its pop-up camera easily, it might not be the same for everybody. So, overall – the design of the OnePlus 7 Pro is a mixed bag. Sure, it looks good but takes a lot of getting used to for daily usage.

Samsung’s Dynamic AMOLED display sure was the best when it featured on the Galaxy S10. But this time, they’ve got themselves a fierce contender with the OnePlus 7 Pro. A large 6.71″ no-notch, no-nonsense display Fluid AMOLED display with QHD resolution is sure to give the S10 a run for its money. There are quite a few things to love about the display. First, is the large screen with no notch or cutouts of any kind. It’s all screen! Second is the QHD resolution for the sharpest of picture quality. And third…maybe the most exciting of all, is the 90 Hz refresh rate, making it the fastest phone screen there is. Everything feels super smooth on the screen, from transitions to animations. And if you can’t tell the difference in there, playing fast-paced games makes the screen really come alive. Gaming on the screen is so addictive that you don’t want to put it down. However, to save the battery, you can tone the display down to 60 Hz and also Full HD+ as well. In addition, if you face eye strains, there’s also DC Dimming option that lets you calibrate the colors to minimize the “flicker effect” seen n high-end smartphones, like the Galaxy S10 itself. The cameras on the OnePlus 7 Pro are not the most exciting features on it, to say the least. Because compared to other flagship cameras, it lacks quite a few things. The triple camera setup comprises of a 48 MP primary camera, a 16 MP Ultra-wide and an 8 MP Telephoto lens. And while this is the standard flagship camera setup of 2019, it doesn’t go all the way to the flagship standard.

While the primary sensor on it, the Sony IMX586, is the same as the Redmi Note 7 Pro, image processing makes a lot of difference. Image quality is decent, pretty good actually. Pictures come out sharp, detailed and hold textures. Colors are true to life as well. Although the pictures are not as vibrant, it’s not disappointing either. The level of exposure, dynamic range and saturation are all well balanced. Therefore, the end result is good looking photos.

Portrait images are taken by the telephoto lens, so, you’ll have to adjust the distance to get the right framing, but as for other aspects like background blurring and edge detection, it does a good job.

Pictures from the Ultra-wide angle are not as good, though. Upon first glance, they do look pleasing enough, but a side-by-side comparison with the main lens reveals that the ultra-wide images are a bit washed out, and the field-of-view is not as wide as on some other phones.

The telephoto lens claims a 3X Optical Zoom. But technically, it’s actually a 2.2X Optical Zoom. However, it still does its fair share of capturing good images, even when compared to the Galaxy S10. The 16 MP pop-up selfie camera is also superb. There are details in the selfies, the skin texture and tones come out quite natural and balanced. Also, the dynamic range is decent, too, but the HDR doesn’t seem to help the selfies much. In addition, there’s a beauty mode, too, which is not very useful. Portrait selfies come out satisfyingly good too, even though it’s all software.

But if you compare the pictures with the Galaxy S10, the S10 wins in most settings. The HDR and vibrancy in the S10 are better, and on Ultra-wide images, the S10 outperforms the OnePlus 7. In terms of portraits, i liked the OnePlus 7 Pro better, but the S10, with its option to adjust background blurs and effects, has an edge. So, overall, the S10 has the better camera. Here are a few comparisons.

In terms of videos, the OnePlus 7 Pro is capable of shooting 4K videos @60 fps. And the video quality is superb, too. Colors are accurate, dynamic range is balanced and the details are present. You might notice a loss of details in the shadows, but the overall video is nice. Optical Stabilization is also pretty good, but not as good as on the Galaxy S10. So, if you talk overall video quality, the S10 wins again.

And of course, there is the NightScape feature, which is the Night Mode in here. It does its job well enough, brightening the images, reducing the noise and sharpening the images at low settings. But it’s not that impressive…there are better night mode camera phones out there.

For Hi-Res images of these camera samples, click here

OnePlus devices have always advertised their phones’ speed. And so, the OnePlus 7 Pro is no exception. With the Snapdragon 855 running the show, you can expect it to be swift…and swift it is. Also, what helps the performance further, is the UFS 3.0 storage. It helps load the apps faster than on other phones. Conducting a speed test to load all the apps proved the OnePlus 7 Pro is faster than others. Even in the AnTuTu benchmark scores, this phone won over the Galaxy S10 and the new Oppo Reno 10X Zoom.

However, RAM management is not that good. It reloads heavy apps and games like PUBG, Subway Surfers, etc. in a relatively short amount of time. And Geekbench scores also revealed that it was inferior to the Galaxy S10. That might be because we tested the base model with 6 GB RAM, but I doubt an extra 2 GB makes a lot of difference.

Still, it handles all other forms of multi-tasking quite easily. Because apart from games, it can keep other kinds of apps open in the background. I don’t think there’s a lot to be said about the software. Because the Oxygen OS is the closest you’ll get to Stock Android! Everything works seamlessly. You get all kinds of features that is available on Stock Android, not to mention the fastest security patches and updates. So, it will also be among the first phones to get the Android Q software when it launches.

It’s still an Optical scanner, not the fancy Ultra-sonic like on the S10 but with the speed, it unlocks your phone, it doesn’t need to be. It might just be the fastest in-display fingerprint scanner on the market right now, with an unlock speed of 0.21 seconds. Because, it is definitely faster than the S10, and slightly better than the Huawei P30 Pro.

You also get the Face Unlock Feature on the pop-up camera, and the unlocking speed is surprisingly fast here, too. The only problem is that without an IR sensor, it won’t be as accurate in low light conditions.

The OnePlus 7 Pro packs a sizeable 4000 mAh battery…again a flagship standard for 2019. The battery can last a whole day easily on the QHD resolution. But if you choose to turn it down to Full-HD, then, you can get a day and a half of battery life on normal usage.

Another great thing about the battery is its improved charging. With a 30-Watt Warp Charging standard, the OnePlus 7 Pro can charge from 0% to 50% in 20 minutes! How cool is that?

Overall, the OnePlus 7 Pro looks like an outstanding device, doesn’t it? It has made a lot of improvements over its predecessors and added some pretty fascinating features too. Also, it has paid a lot of attention to fine details – DC Dimming, faster fingerprint scanner, faster charging, and water-proofing (albeit no IP rating). In addition, that 90 Hz refresh rate is a game changer in smartphone displays. But, with that, it feels like OnePlus 7 Pro left out the major things unpolished. For example, the camera. If you take away the Ultra-wide and Telephoto lens, the camera quality is not much of an upgrade over the OnePlus 6T. So, if you’re using a OnePlus 6T right now, I don’t see a very good reason to upgrade to this one.

Don’t get me wrong. OnePlus 7 Pro is still an amazing phone. But, it’s just not as compelling as its previous devices used to be. I have used most OnePlus devices, from the OnePlus 2 upwards. I remember getting my OnePlus 3T and being full of excitement. OnePlus 6 was also a game changer. However, I didn’t feel the same with this.

Furthermore, with its price increasing relatively over the years, I don’t think it still retains the Flagship Killer title anymore. That title may very well go to the likes of Redmi K20 Pro now. That remains to be seen yet…