This is our review of Intel 12th Gen Alder Lake CPU (Core i7-12700K) on Windows 10 and Windows 11. If you’ve watched or read our comparison between the 11th Gen Rocket Lake and 12th Gen Alder Lake CPUs, then you know that Intel is back with a bang! To pull this off, the company had to use every trick up its sleeve—from the hybrid core architecture to the new 10nm process node and everything in between.

By now, you might already be familiar with the said hybrid architecture but in case you’re not, here’s a quick recap.

UNlike every other x86-based intel and amd processor of the past, alder lake is different. in a good way.

Contrary to a homogenous CPU design consisting only of high-performance cores, these 12th Gen CPUs also bring low-power high-efficiency cores into the mix. With this, Intel is promising a significantly more power-efficient workflow alongside improved performance.

For instance, the company claims that the Core i9-12900K delivers the same level of performance at 65W—compared to what the Core i9-11900K manages at 250W! Besides the core layout itself, the new CPU microarchitectures, cache architecture, and a multitude of other factors contribute to the upgrade as well—but you get the gist.

So, to make sure this novel CPU design doesn’t end up misbehaving with the operating system, Intel has worked closely with Microsoft to develop something called “Thread Director” that reportedly yields the best performance on Windows 11.

Basically what it does is give the OS a better view of thread requests and the state of each core to help it decide whether a thread goes to a performance or an efficiency core. According to Intel, Thread Director monitors instructions at a nanosecond level and communicates with the OS on a microsecond level. All this sure sounds fantastic on paper. But if history has taught anything, jumping on the new OS bandwagon this early on is not a good idea. So the question has to be asked: just how good is Alder Lake on Windows 11—if at all? For this, we ran a bunch of benchmark and gaming tests on Windows 10 and 11.

In terms of system specs, it’s the same that we used in our 11th Gen-12th Gen comparison. Once again, if you haven’t seen or read that comparison, I’ll highly recommend doing so because we’ve discussed all the nitty-gritty details of Alder Lake apart from its upgrades over 11th Gen there. 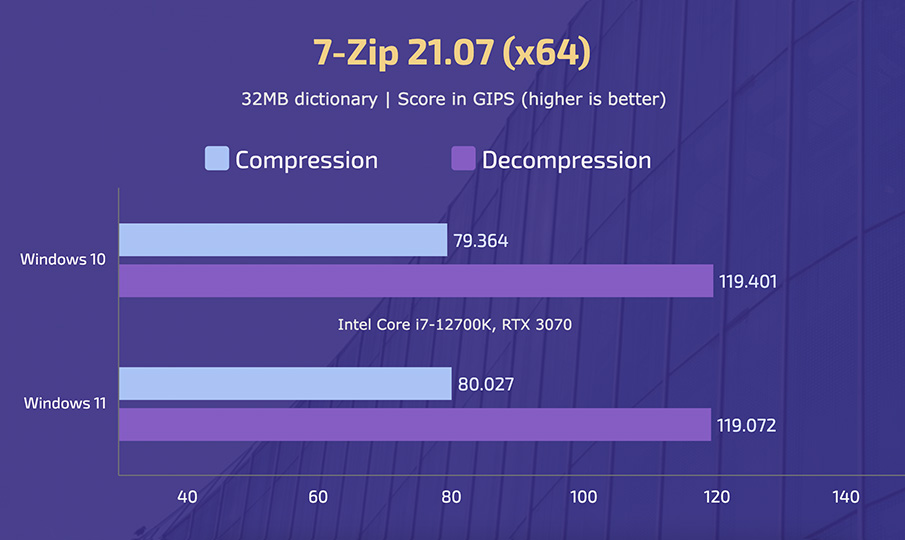 Anyway, looking at the 7-Zip 32MB dictionary compression and decompression, their minimal difference can be simply written off as run-to-run variation. Same with Blender.

Besides render speed, I didn’t find any substantial advantage for this 12th Gen CPU on Windows 11 when it comes to power usage or temperature either. In Blender’s all-core full benchmark test, I clocked the CPU temperature on Windows 10 and 11 and 86 and 88°C respectively—while their power draw was also negligibly different at 186.796W and 188.146W. 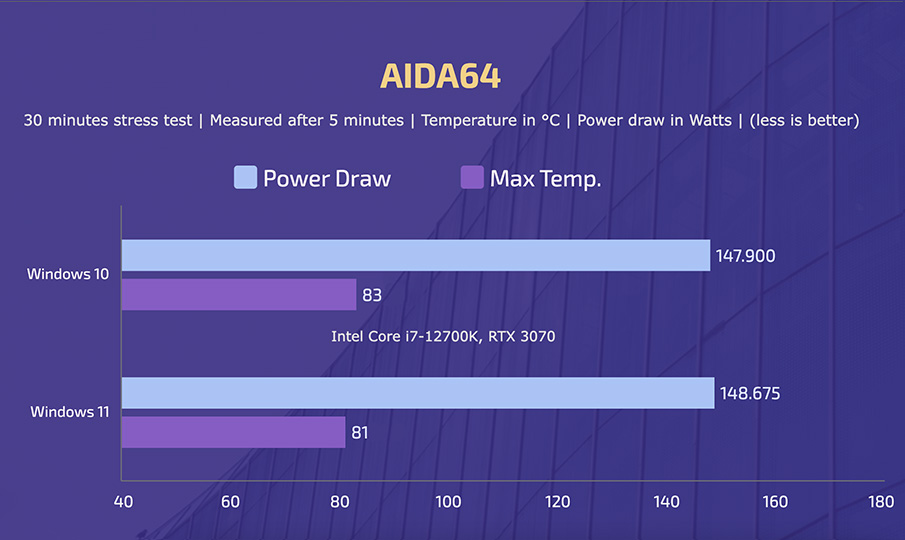 Cinebench R23 tells the same story in both single and multi-core benchmarks. Here, this Alder Lake processor’s single-core score on Windows 11 came to 1842—a roughly 1.68% worse result than on Windows 10.

Five minutes into the test, Windows 11 posted about 9.75% cooler CPU temperature although it was marginally behind in terms of power usage. The Core i7-12700K was once again slightly better on Windows 10 under the Cinebench R23 multi-core test. Not that it matters at all, but it scored 22527 on Windows 10 and 22372 on Windows 11. Then again, running its multi-core 30 minutes stress test somewhat flipped the results in Windows 11’s favor. Corona 1.3 render test puts it ahead of Windows 10 by a modest 3.08% as well. Wow, I’m almost running out of synonyms for these minute variations.

Thankfully, Handbrake conversion finally shows some meaningful upper hand for Alder Lake on Windows 11—or does it? You see, the i7-12700K completed converting a custom 895MB 4K H.264 file to H.265 in 1 minute and 28 seconds on Windows 10. 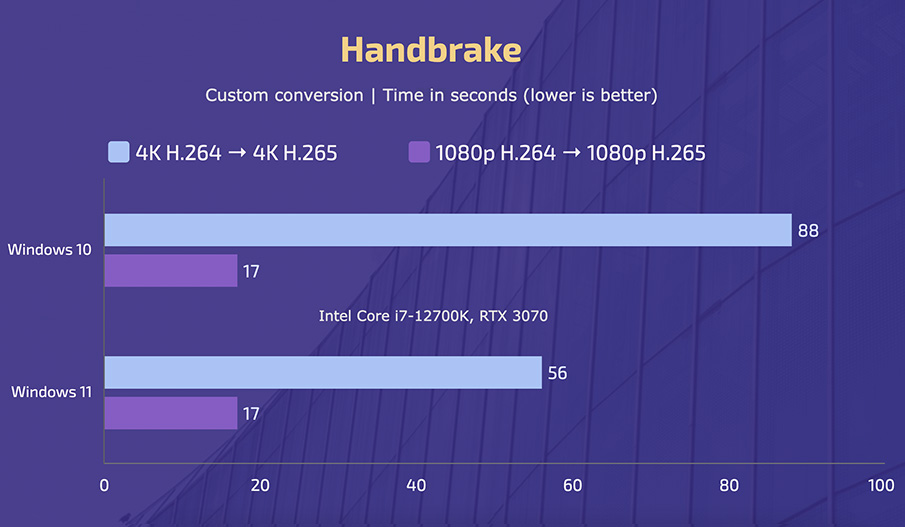 To compare, Windows 11 finished the conversion 57.14% faster at just 56 seconds. Now, based on everything else I’ve discussed so far, this result is suspiciously fast. Further raising our doubts is the fact that this CPU pulled off the 1080p H.264 to H.265 conversion at the exact same time.

Therefore, I manually set Handbrake’s thread schedule priority to “High” from “Normal” for a rematch. Mind you that this is not regulation for most applications or most users—meaning the operating system’s scheduler automatically does it for you. But because Alder Lake introduces a hybrid core architecture that supposedly works better with Windows 11, I thought it was somehow necessary. 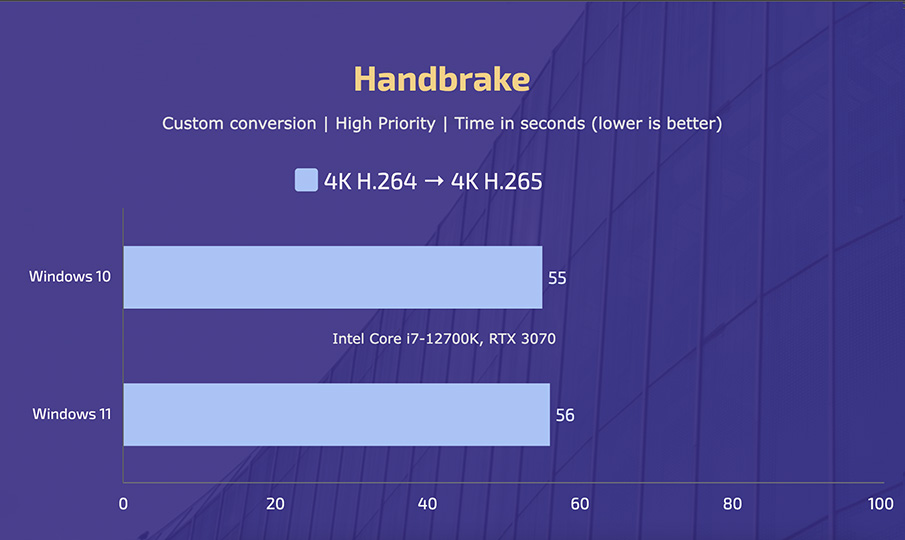 And lo and behold, Windows 10 actually completed the 4K conversion in 55 seconds when making this small change. It might be something to do with the scheduler, or this contrast is app-specific entirely—I’m not sure.

Moving on, we’re back to the tale of dismissable differences under the V-Ray 5 CPU render where this processor posted 15636 on Windows 11 and 15686 on Windows 10. Our custom Premiere Pro render was also nominally slower on Windows 11. 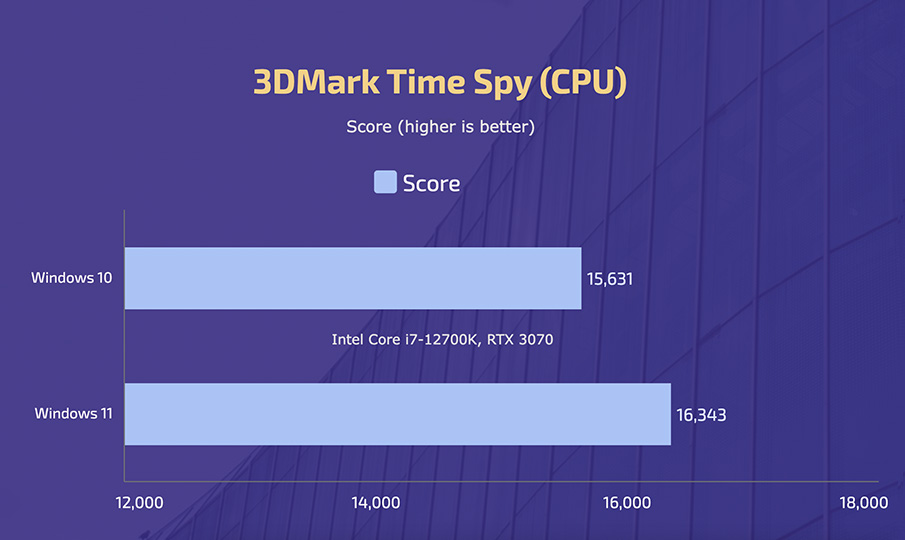 PugetBench’s Photoshop benchmark was moderately ahead on Windows 11 as well. 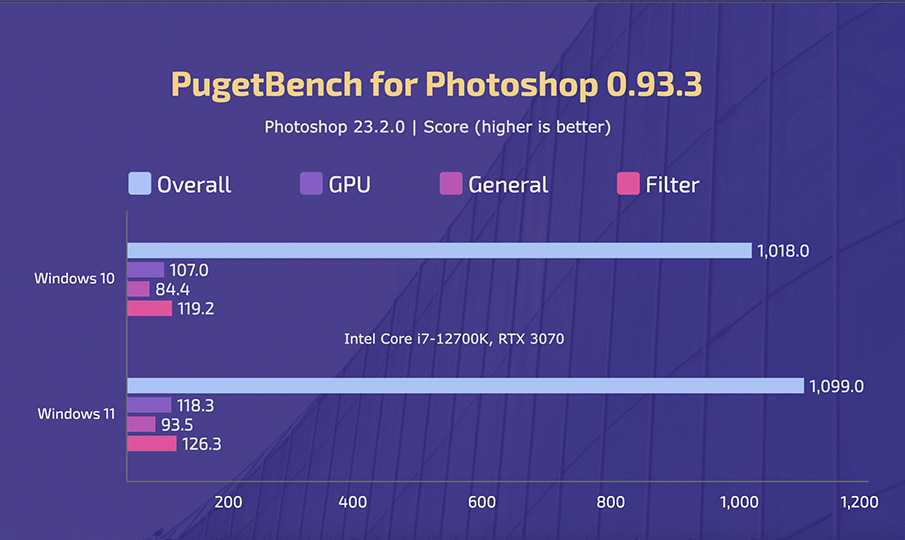 As you can see from the chart, this Alder Lake CPU managed a 1018 overall score on Windows 10 and 1099 in the competition. Besides this, the GPU, General, and Filter scores are also better on Windows 11.

On the other hand, PugetBench’s Premiere Pro benchmark delivered a mixed outcome. 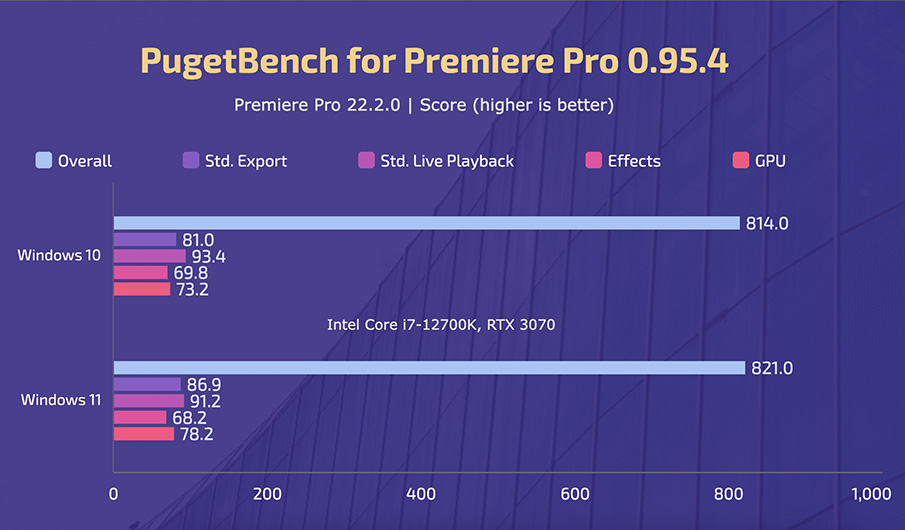 While i7-12700K’s results were superior on Windows 11 in terms of the overall score, Standard Export, and GPU—it fell behind on the Live Playback and Effects tests.

Our performance benchmark ends with SPECworkstation 3.1. As the name implies, this is a workstation benchmark that evaluates a system’s performance across various professional applications. Here, Windows 11 achieved its biggest victory on the Media & Entertainment (M & E) CPU test—outclassing Windows 10 by a decent 18.1%. 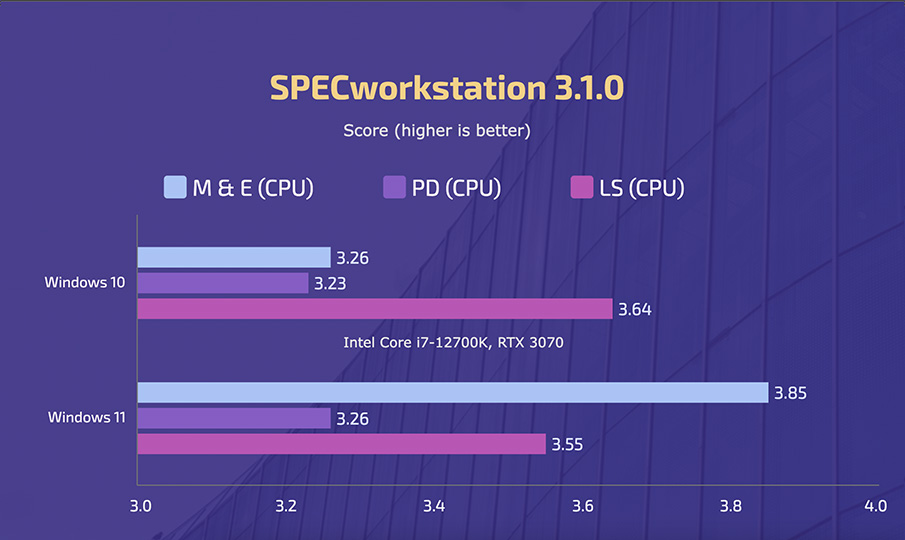 It was marginally leading in the Product Development (PD) CPU benchmark as well. On the contrary, Windows 10 secured a win in the Life Sciences (LS) CPU test since its 3.64 score is around 2.54% faster than Windows 11’s 3.55.

There’s a similar difference when switching to 1440p—whereas the 1% low fps is almost the same between the two operating systems. However, the 0.1% lows are almost ridiculously low on Windows 11 at both resolutions. I didn’t notice any significant frame drops or anything here—but even after multiple tests, the result was indistinguishable.

Regardless, Forza Horizon 5 has practically the same result on Windows 10 and 11 at either 1080p Extreme or Ultra preset. More importantly, both 1% and 0.1% lows stay at a respectable margin. 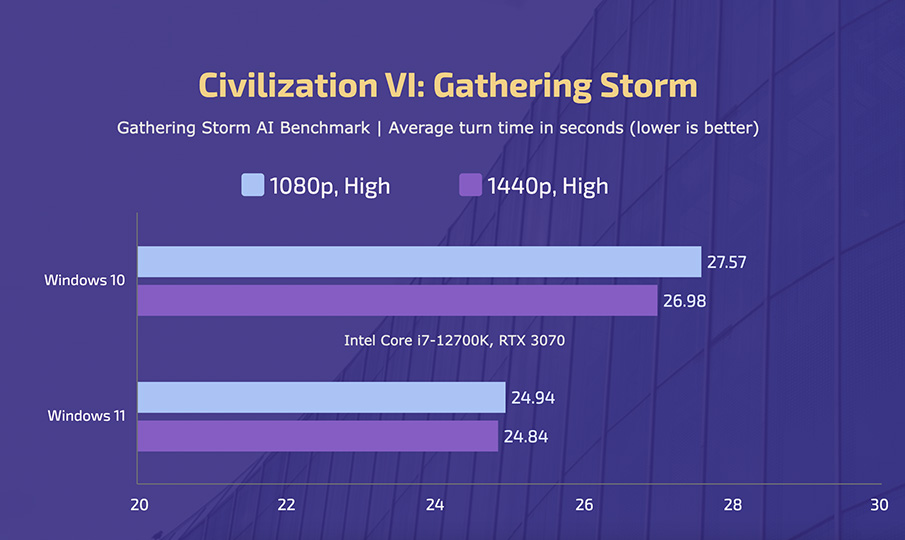 The i7-12700K achieved basically identical scores on GPU-bound games like Cyberpunk 2077 too.

Shadow of the Tomb Raider Moving on, Shadow of the Tomb Raider’s in-game benchmark gave 7.92 and 2.63% higher average fps on Windows 11 at 1080p Highest and High settings. Hitman 3’s average fps is pretty much the same on either OS, but the 1% and 0.1% lows are considerably better on Windows 11. All in all, from everything I’ve discussed so far, it’s pretty clear that there’s really not much of a competitive advantage to Intel’s 12th Gen Alder Lake CPUs on Windows 11 when it comes to gaming or creative workloads. Maybe Thread Director’s algorithm isn’t mature enough to deliver the promised optimization on Windows 11—or maybe it was marketed more as Windows 11’s promotion instead. In any case, if your professional workflow runs perfectly fine on Windows 10 and you don’t see any Windows 11-exclusive features or visual overhaul to be that useful, stick with what you have. 12th Gen CPUs are great—but not necessarily on Windows 11. Not yet.