Spot, Boston Dynamic’s robot dog, has regularly made headlines for his unusual dancing moves and stunts. However, it now has a competitor to steal all the thunder. Kawasaki, the well-known motorcycle manufacturer, has recently unveiled “Bex,” a quadruped robot goat capable of carrying up to 100 kgs of load. Read along to know more about the Bex robot goat from Kawasaki.

Kawasaki has revealed its new robot “Goat” at the International Robot Exhibition (iREX) 2022 in Tokyo, Japan. And, it’s named “Bex” after a certain species of wild goat. It’s an outgrowth of Kawasaki’s Kaleido program, which has been focusing on developing bipedal humanoid robots since 2015. 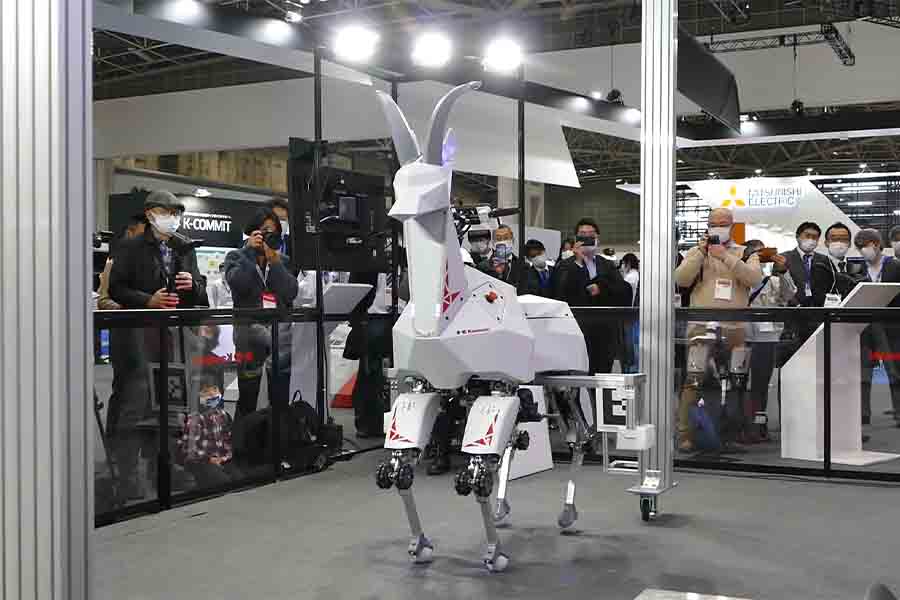 Masayuki Soube of Kawasaki said in an interview, “Halfway between humanoid robots and wheeled robots, [we] wondered if there was an opportunity. That’s why we started developing Bex, a quadruped walking robot. We believe that the walking technology cultivated in the development of humanoid robots can definitely be applied to quadruped walking robots.”

Moving on, a user on YouTube has shared a video showing the Bex robot in action. As you can see, it has horns and can move like a normal goat—thanks to its four-wheeled foot. The robot can also hold the weight of an adult human and ride around like a horse. Likewise, the rider can control the robot via handlebars.

While Bex can surely walk like a goat, its pace is considerably slower than its real living sibling. So, when speed is a requirement, Bex utilizes its hybrid mobility system. It can lower its body and kneel on four pairs of wheels positioned on each knee, transforming it into a vehicle of sorts. Yet, this is only feasible on a leveled surface. The bot readjusts itself to stand on its four movable wheels when the ground becomes more uneven.

Despite carrying humans, Bex’s is designed is to transport building materials and other items from one site to another. Just so you know, it’s rated carrying capacity is around 200 pounds (100 kgs). Kawasaki aims to use the robot in performing remote industrial site inspections—similar to what Spot is doing at Hyundai facilities in Korea.

Moving on, the company has also designed the upper portion of the Bex to be completely modular. So, customers can customize it to meet their own requirements.

Besides Kawasaki, Hyundai has also developed a robot named “MobED” that carries your daily items; while China has recently unveiled a Yak-shaped robot to aid in military operations. Such innovations do make you feel that robots will help create a future where physical work will be a choice.