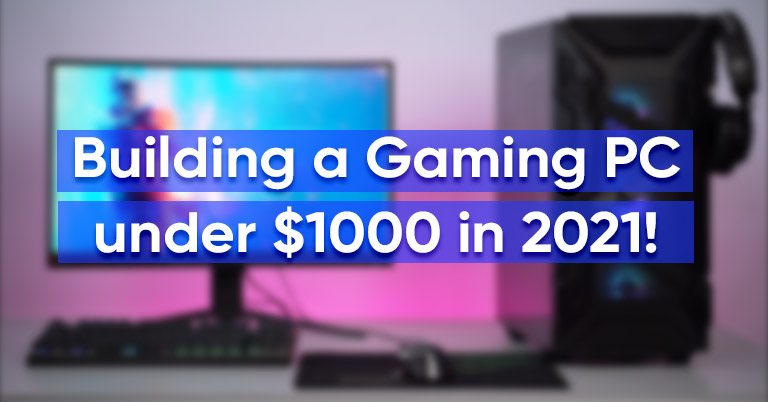 Here at Gadgetbyte, we are planning to come with a new PC build every month. We are starting this new series with a midrange gaming PC build with a budget of around $1000. This PC will cost you around a thousand bucks in the US, NPR 180,000 in Nepal, or INR 100,000 in India.

For this build, we went for MSI’s B560M Mortar Wi-Fi. Though not as good as the expensive Z-series, it is a decent budget motherboard with few significant upgrades over the last-gen B460M.

The Voltage Regulator Module on the MSI B560M Mortar Wi-Fi can deal with the Intel Core i5-11400, which we chose for this build. In addition, it has an extended heat sink design and is Wi-Fi 6E-ready. The motherboard has four RAM slots, and it even supports RAM overclocking. You can also opt for the cheaper B560M Bazooka or the slightly more expensive B560M Tomahawk variant if the price difference in your region is not that much.

As for the CPU, we were confused between the Intel Core i5-11400 and the Ryzen 5 3600. Both have similar specs and pricing. We ultimately decided to go with the i5-11400, as it is slightly better in gaming.

The stock coolers that Intel provides you with its CPUs aren’t that good. Thus, we got ourselves an aftermarket air cooler from Cooler Master, the Hyper H410R. It costs around $30 and comes with a thermal paste as well.

We have been a little conservative when it comes to storage. Although our motherboard supports the newer PCI Gen 4 standards, we avoided compatible SSDs on account of them being expensive. Instead, we installed a 256GB PCIe Gen 3 NVMe SSD from PNY. To store all the games on our PC, we also installed 1TB of HDD from Seagate.

You are probably already familiar with the market situation for graphics cards these days. GPUs are scarce, and as a result, their prices have skyrocketed. This is all due to the ongoing global chip shortage, scalpers, and crypto-miners.

Luckily, we were able to get our hands on the NVIDIA GTX 1660 SUPER from MSI, which we paid $400 for. The pricing is crazy given that it is not an RTX card with dedicated Ray Tracing cores. It is still a decent mid-range card, though. However, we should have been able to buy RTX 3060 for the same price, if not for the GPU shortage.

Here, we were able to secure a good deal for the Asus TUF GT301. We got this for around NPR 12,000 in Nepal. At the time of the build, it was on sale at MDComputers in India too. Asus TUF GT301 is an ATX Mid-Tower case, which comes with four 120mm fans pre-installed, has bold aesthetics, tempered glass, and all.

We went with a 600W power supply from Cooler Master. It is a non-modular PSU with an 80 Plus White certification.