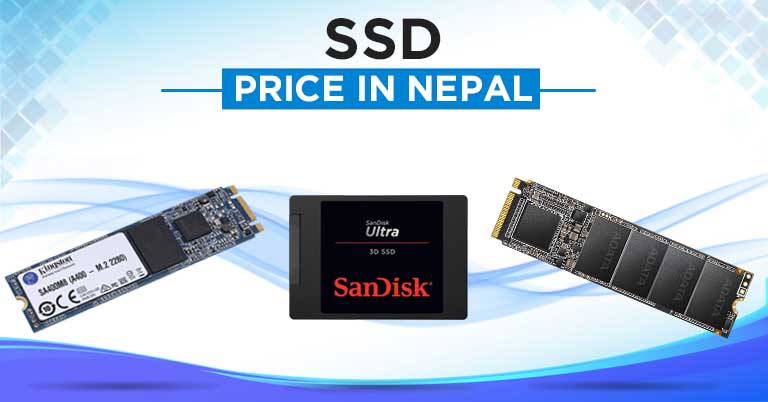 One of the most effective ways of speeding up an old setup is by swapping the HDD with SDD storage. If you are looking to include one into your system you have come to the right place. We have listed all the SSD that you can currently buy in Nepal along with their specs and price.

What is an SSD?

Solid State Drive or SSD is a technology that is rapidly replacing the Hard Disk Drive in the computer world. Like HDD, SSD is a data storage device, and the difference between the two lies in the way they store data. In HDD, data are read and written on spinning disks using an arm. On the other hand, SSD doesn’t have any moving parts and data here are stored digitally in integrated circuits. Generally, SSDs are smaller and faster and thus are used to speed up performance in speed up. On the other hand, HDDs are still being used as backup storage because it is cheaper than SSD.

These are the most common type of SSDs. They are as compact as a 2.5” HDD and even use the Same SATA connector. There are standards within the SATA connectors and you have to pay attention to the compatibility of your drive and the SSD. For instance, SATA III is faster (6Gbps) than the SATA II (3Gbps). You also need to take care of the thickness of the SSD. The most common thickness is 7mm but you may also find SSDs that are 9.5mm or 12.7mm thick.

mSATA SSDs are typically smaller than the 2.5-inch drive and are designed to plug into mSATA sockets. Normally, you would not notice much difference in speed between a SATA SSD and an mSATA. The latter is just a smaller form factor than the former.  You would normally find them in thin and portable devices such as laptops. However, these have become quite rare as users have already moved to M.2 SSDs.

M.2 SSDs are a lot compact in size compared to the SATA and mSATA counterparts. An M.2 SSD can support either SATA or PCIe. The ones that support PCIe are faster than those with support for SATA and thus are more expensive.

M.2 SSDs come in different sizes but the most common is the Type-2280 measures 22mm in width and 80mm in length. It is also comparable to a RAM stick.

SSDs nowadays come with support for NVMe. NVMe is a transfer protocol that allows the SSD to interact directly with the PCIe lanes bypassing the restrictions of the SATA interface.