In the matter of chipsets powering the Android devices, Qualcomm is quite a leader in the business. And despite the presence of Exynos (Samsung), Kirin (Huawei), and MediaTek processors, Qualcomm is users’ favorite among the bunch. Smartphone manufacturers also have partnered with Qualcomm often times to power their devices with Snapdragon chipsets. And we can see Snapdragon 400, 600, and 800 series chipsets respectively in budget smartphones, midrange handsets, and the top-tier flagship smartphones. Now with a view of bridging the gap between mainstream midrange (600 series) and flagship chipsets (800 series), the company announced the Qualcomm Snapdragon 700 series chipsets at MWC 2018 for the premium-tier devices.

“The Snapdragon 700 Mobile Platform Series will bring premium tier technologies and features into more affordable devices, something our global OEM customers and consumers are demanding,” said Alex Katouzian, senior vice president and general manager, mobile, Qualcomm Technologies. “From our cutting-edge Qualcomm AI Engine to superior camera, device performance and power, the Snapdragon 700 Series is optimized to support the experiences consumers have come to expect from the most advanced mobile devices at a lower price point.”

With a number of variants already existing in the 600 and 800 series chipsets, it was least expected from the Qualcomm to bring a new series of chipsets. However, Qualcomm clarifies this move as an attempt to enhance the potential of the high-tier smartphones, which previously was prevailing only in the 800 series flagship chipsets. With the tremendous advancements in the field of Artificial Intelligence, Machine Learning, and the Internet of Things (IoT), the chipset maker finds it a high time to deliver a superior performance, power efficiency, and AI capabilities even in the affordable handsets. And below are the list of advancements, we can see on the new Qualcomm Snapdragon 700 series chipsets.

Qualcomm Snapdragon 660 chipset launched in May last year. The chipset was considered quite capable for the AI needs during that time. Now with new 700 series, Qualcomm promises to deliver 2X improvements over the 660 chipset in terms of AI capabilities. For that, the chipmaker will use multi-core AI Engine. The company has also planned to employ a new architecture and intended to achieve the desired AI performance through heterogeneous computing. 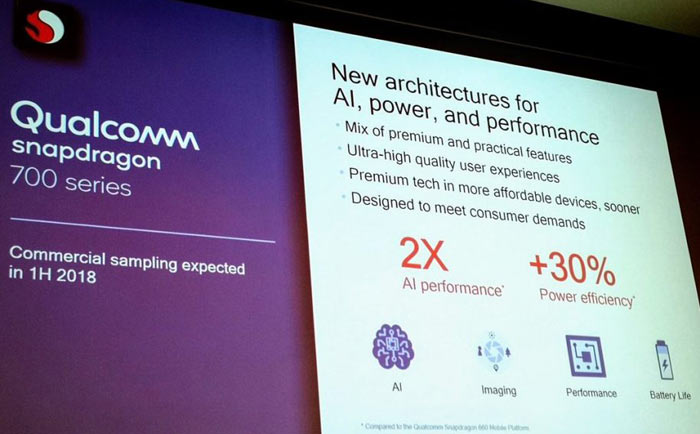 Even in the photography department, there will be pleasing improvements because of the AI and super slow video capturing potential. And through the Qualcomm Spectra ISP in new chipsets, the company promises to include professional grade camera features.

Employing new architecture in new chipsets, the chipmaker will include Qualcomm Spectra ISP, Kryo CPU, and Adreno Visual Processing subsystem. With this setup, the company has assured 30% improvement in power efficiency over the Snapdragon 660. And there will also be an impressive boost in performance and better battery life. Qualcomm also promises to include Quick charge 4+ in these new chipsets. With this fast charging technology, the smartphone replenishes with 50% charge in a mere time of 15 minutes.

To present the 700 series as the capable chipsets, the company will furnish them with the advanced features of wireless technologies with ultra-fast LTE, carrier Wi-Fi features, as well as enhanced Bluetooth 5.

The chipmaker hopes to deliver these new chips to the customers within the first half of 2018. So we can expect smartphones with these chipsets to be available at the end of 2018 or in early 2019. And since the most of the features of the Qualcomm Snapdragon 700 series chipsets are still under the veil, we have to wait till the chipset’s launch to discover its full potential.