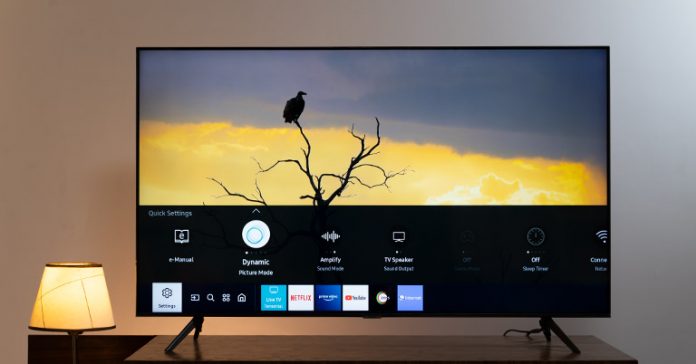 Today, I have with me Samsung’s latest mid-range TV, the AU7700. The new AU series is the successor of the TU lineup from last year, which fared admirably in our review. So, this one is also worth a shot this time. So, in this review, I’ll be taking you on a ride to detail the ups and downs of the new Samsung AU7700 55-inch 4K TV.

Starting with the design, the AU7700 looks exactly like something you would expect from a fairly premium TV in 2021—a plastic back, minimal bezels, and a stand. Thus, I won’t say this TV will win any beauty prizes, but it looks premium and is well-built. The bezels surrounding the screen are of minimal thickness and aren’t eye-catching or distracting either. 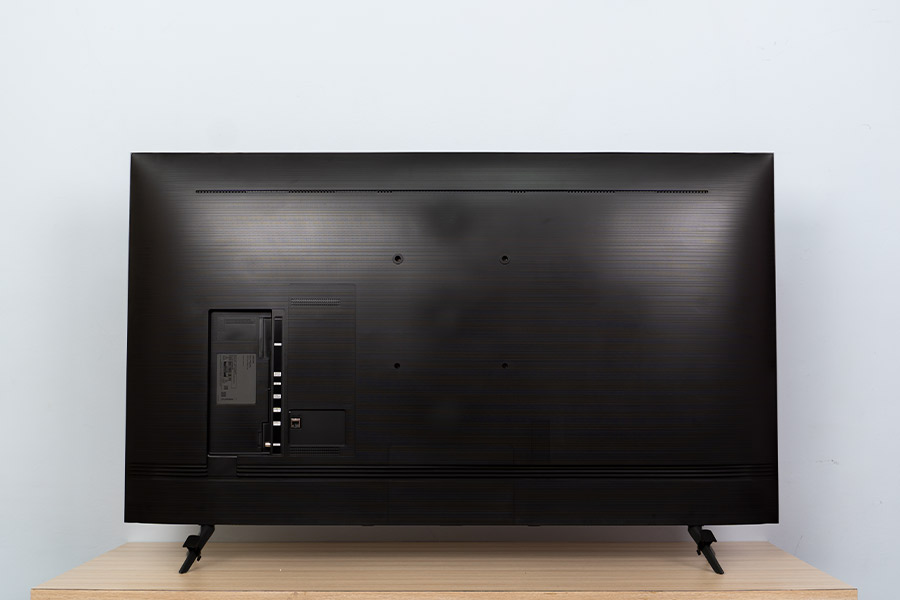 Similarly, the AU7700 isn’t as thin as OLED TVs, which we obviously weren’t anticipating, and the back design is minimal as well. It features a characteristic textured finish and an arched form factor, which avoids the expense of a back bulge to house the connectivity ports. 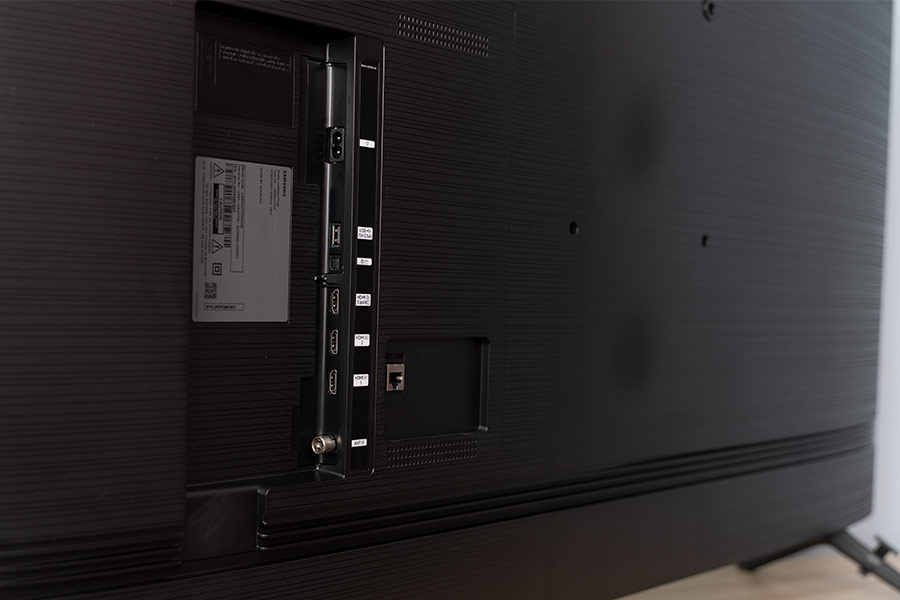 Talking of ports, the I/O options include one USB Type-A, three HDMI (one of which supports eARC), and one Antenna port on the back groove. Additionally, there’s an ethernet connection patched independently on the right of other sources.

Holding the TV in its place are the Y-shaped legs that, as aforementioned, have a plastic build. What’s easy here is that you can just snap the legs into the unit to assemble it. No hassle with the screws or other fancy tools. And of course, if you want to wall-mount it, that’s entirely possible as well. But you’re gonna have to purchase the mounting bracket separately, since Samsung doesn’t provide it in the box.

On the other hand, if I had to assess the pedestal’s strength to hold the TV, I’d give it just 3.5 out of 5. That’s because even with a gentle knock, the TV wobbles quite a bit. Hence, I wish Samsung had included a metal stand like Panasonic did in its HX750 series, which we recently reviewed. 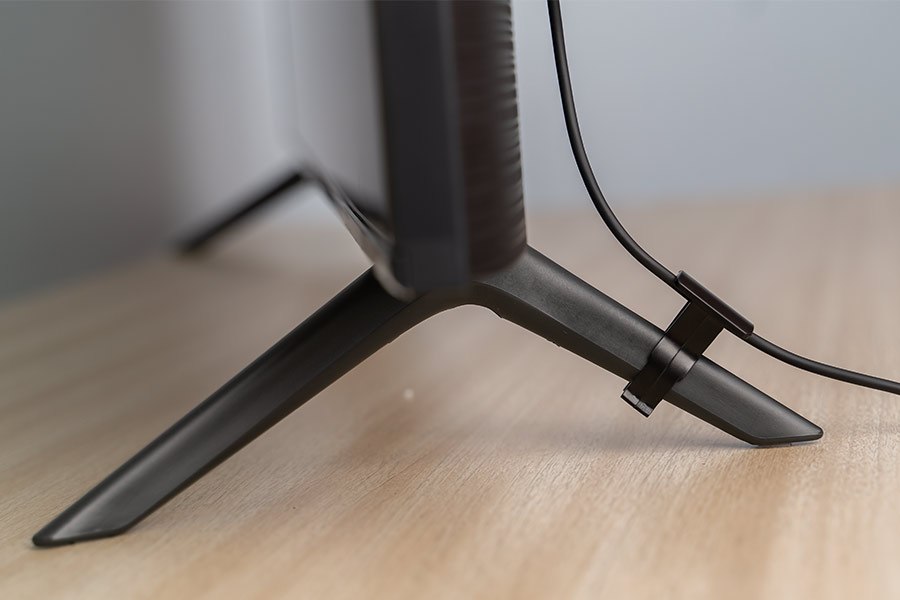 Moreover, the lone physical control button is located below the company’s logo in the bottom bezel. With it, you can navigate between the power, volume control, and other simple toggles. Also, the bottom section is house to two down-firing speakers, which I’ll talk about more in the audio section of this review.

Like in last year’s TU8000 series, Samsung has continued the cable management design onto this TV as well. These are the horizontal passages that run from edge-to-edge and hold all of the cables that are connected to the TV for a clean setup. In addition, the company also provides clips to secure the wires onto the leg stand for a more aesthetically pleasing appearance.

Moving on to the display, the AU7700 we have here is a 55-inch model with a 4K resolution and a refresh rate of 60Hz. It has the PurColor technology, which, according to Samsung, allows the TV to express a wide spectrum of colors for optimal picture performance and an immersive viewing experience.

Also, let me add a small note here that none of Samsung TVs support Dolby Vision. Instead, they opt for the open-source HDR10+ format. So if you’re looking for a Samsung TV with Dolby Vision, you’ll always come up short. 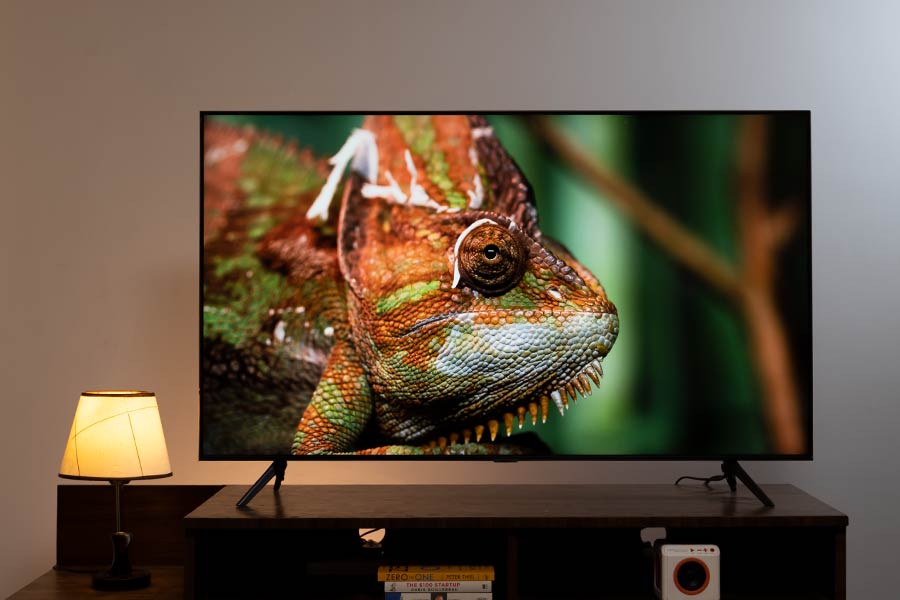 Regardless, since this panel supports HDR10+, the color and contrast reproduction are pretty great. But, the default settings do require some tweaks to get the most out of it. So, I always ensured that the brightness was set to maximum, the contrast in the range of 35 to 40, and sharpness around 5 or 6.

While that was something of my personal preference, the TV also has built-in picture modes that let you choose the ideal display settings based on the content you’re watching. Listing all of them, there’s the Standard, Natural, Dynamic, Movie, and at last the Filmmaker Mode.

Here, the Standard mode adds slight warmth to the display but can’t produce black levels quite as much. Thus, videos look a bit washed-out, although the highlights are more well-preserved here.

On the other hand, the Natural mode works with most of the content types. Under this, the shadow details look good while the panel offers a good color tone for watching the content as well. It does deliver blacker blacks, so watching a mix of bright and dark content looks good in this mode.

Similarly, the Dynamic mode produces images with color tones that look more appealing to the eyes. Additionally, its color temperature is more leaned towards the cooler side, which results in a mild bluish tint. But, it cleverly increases the intensity of the more muted colors and leaves the well-saturated colors untouched, resulting in vibrant images.

Now, let’s sum up the Movie and Filmmaker modes in one, as I didn’t see much of a difference in the two. Both of them add warmness to the panel and are ideal for watching flicks. So, what better way to put it to the test than watching a movie? I and my entire crew watched The Suicide Squad while nibbling on pizzas, and we rigorously enjoyed those 2 hours and 13 minutes.

However, what differentiates the Filmmaker mode is its ability to present contents in the way the director intended—roughly. It disables the TV’s post-processing such as motion smoothing which causes the dreaded “soap opera effect” and lets you enjoy a movie in its native frame rate, and color temperature.

On top of all of this, the AU7700 has a feature called Contrast Enhancer that delivers even darker darks. As for the viewing angles, everything is pretty standard here. So, you don’t have to compromise on the TV’s contrast and saturation levels while looking at it from the sides. Moving on, Samsung provides a particular feature for action-heavy content and motion processing. Called the Motion Xcelerator, it reduces picture shake on the screen. To enable it, you need to go to the Picture clarity settings and increase the judder level depending on the content. Usually, I set it to 8 or 9.

What this does is use motion interpolation or black frame insertion to artificially add frames in-between the said fast-paced content, resulting in a comparatively smooth viewing experience.

However, as aforementioned, I used it only when watching sports and action scenes. Turning it on for movies adds unnecessary smoothness, which affects the whole experience for someone who enjoys content on their original, such as me.

Now, if you’re an avid gamer and wish to couple your TV with a console, then Samsung AU7700’s game mode is something to cherish for. It reduces input lag found in normal mode and also optimizes motion blur and judder, whenever the TV detects a viable input source.

Heading to the software side of things, Samsung’s Tizen OS hasn’t changed much compared to last year. We already know that it has one of the best UI/UX designs and a clean aesthetic. And with a little exploring, you’ll be familiar with this OS rather easily. Powering the TV is the same Crystal 4K processor as last year, which promises to deliver lifelike colors thanks to its sophisticated color mapping technology.

But, I was disappointed with what I was greeted with. Navigating through various apps and features isn’t as seamless, and there are visible delays or lags. To compare, we hadn’t faced such an issue with last year’s TU8000. So, it’s a bit of a letdown for me. 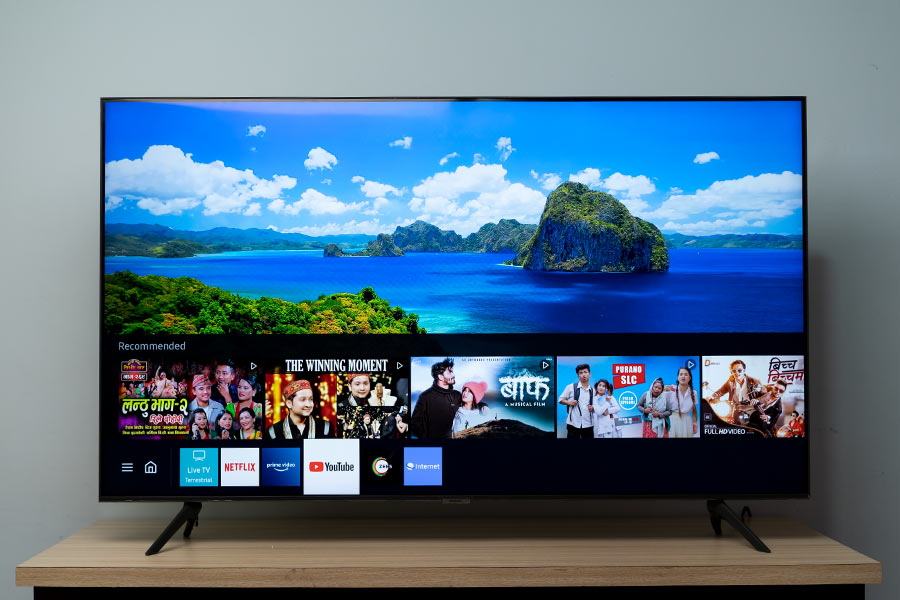 Anyway, the Tizen platform comes pre-installed with decent selections of apps that you can use right after turning on the TV. Netflix, Amazon Prime, and YouTube are among the streaming services readily available, while you can add other applications from the App Gallery. One small detail I love about this is that it categorizes apps into different sections for easy browsing.

Voice control is another feature that I could not miss here. Unfortunately, in South Asian markets like Nepal, Bhutan, Bangladesh, and Sri Lanka, it only supports Bixby voice assistants—whereas the Indian market enjoys Google Assistant and Alexa support as well.

I’m not sure how I feel about this prejudice, but Bixby doesn’t leave any space for complaining. It can easily adjust different TV settings and is pretty spot-on in terms of voice recognition and responsiveness.

There are a couple of more features worth mentioning on the AU7700. It has Windows Sharing, Samsung DeX, and Apple AirPlay support—although it lacks Chromecast support.

Here, you can stream content from your iPhone, MacBook, or other Apple devices to the TV. Similarly, Windows Sharing is used to screen-cast a PC while DeX extends a Samsung smartphone or tablet into a desktop computing experience. From students, teachers, to business professionals, these features can come in handy to cast presentation slides or other similar documents on the large screen.

Regardless, because of the noticeable lags, I mentioned earlier, using these features hasn’t been as seamless as I’d preferred.

Here, the remote that ships with the AU7700 are just like other modern TV remotes, with a slim and slender profile that houses only the most necessary buttons.

But this time around, Samsung has used recyclable material for its construction. While it ultimately doesn’t feel as premium as the remote on the TU8000, we wholeheartedly endorse this decision. Using the voice control button, you can make in-app searches on YouTube as well.

Apart from this, there’s a power button, a circular directional pad with a select button inside, and a dedicated button for Netflix, Amazon Prime, and the internet. In addition, Samsung’s One Remote can double as a remote for your cable operator’s set-top box as well, although this function isn’t available in Nepal just yet.

Getting to the audio portion of the review, the Samsung AU7700 55″ 4K TV performs impressively. It comes with two 2CH 20W bottom-firing speakers that support Dolby Digital Plus. However, DTS support goes missing on this TV. Quality-wise, the dialogues sound clear and the audio can get enough loud to fill small to medium-sized rooms. Additionally, the audio doesn’t distort at the highest volume either.

AU7700 also has three audio profiles to choose from. Standard is the default setting, with the other two options being Adaptive and Amplified. The Standard mode isn’t as deep as I’d want it to be and lacks the punchiness I crave for.

Looping the modes, I enjoyed the Adaptive mode’s added wallop, which finds a decent mix between low frequencies without sacrificing clarity in the mids. Yet, it lacks the power and depth of a dedicated soundbar. But, it does add a decent amount of weight that prevents the audio from sounding too thin.

Still and all, if you desire window-rattling bass, you’re gonna need a separate home theatre system. Now, if you opt for a soundbar instead, Samsung’s Q-Symphony is something you should know about. Basically, it lets you route audio from the TV speakers and the soundbar at the same time to deliver spatial audio.

Further adding to the appeal of this 4K TV is the Samsung Tune Station. It’s just an app that you need to download from the App Gallery, which converts your Samsung Smart TV into a virtual speaker system. For this, you can play music from your smartphone or a USB stick on the TV.

Nonetheless, it offers some intriguing features that allow you to personalize backdrops from a wide assortment of artworks. On the other hand, there’s the option to turn off the TV entirely for an audio-only experience as well.

Wrapping up this review, using the Samsung AU7700 55″ 4K TV for a couple of weeks or so has been a time well spent. The narrow bezel, along with excellent picture quality and impressive audio quality, makes for a really enjoyable watching experience. Still, it does have a few flaws of its own, including the laggy interface which can get annoying. But overall, it delivers on a bucket list of promises.