Home Samsung Samsung Galaxy A30s receives a discount – Still not worth the price! Samsung is doing well in the budget and mid-range smartphone section. The overhaul of its budget phones with the new ‘A‘ & ‘M‘ series has yielded fruitful results for the South Korean conglomerate. The company launched Galaxy A30 back in March of 2019 and recently launched its ‘s‘ variant aka Samsung Galaxy A30s in India and other parts of the world. Launched about a month ago in Nepal, Samsung is now offering price-cut on the A30s as a part of its 50th-anniversary celebration.

The ‘s’ in these ‘s’ variant of smartphones seem to have a “slight” improvement over the ones without it rather than a “significant” upgrade. Is that it Samsung? Did I crack the code? Do I win something? Anyway, there aren’t many things to get excited about here. The one thing that would definitely catch your eye, however, is the new triple-rear camera setup.

A30 had a dual-camera setup on the back with a 16MP primary lens and a 5MP ultra-wide lens. This, to our joy, has been replaced with a triple camera setup with a 25MP main shooter, 5MP depth sensor and 8MP wide-angle lens in the A30s. Uninspiredly, there is no upgrade in the selfie camera.

Don’t expect any performance upgrades either since Samsung hasn’t bothered itself with fitting in a new SoC. And are you ready for the biggest disappointment of the A30s? Samsung somehow thought of the wonderful idea of downgrading the resolution of A30s to a measly 720 x 1560 HD+ display with 268 PPI density. This really doesn’t do justice to the phone’s capable 6.4″ super AMOLED display. Content consumption has really taken a hit here. 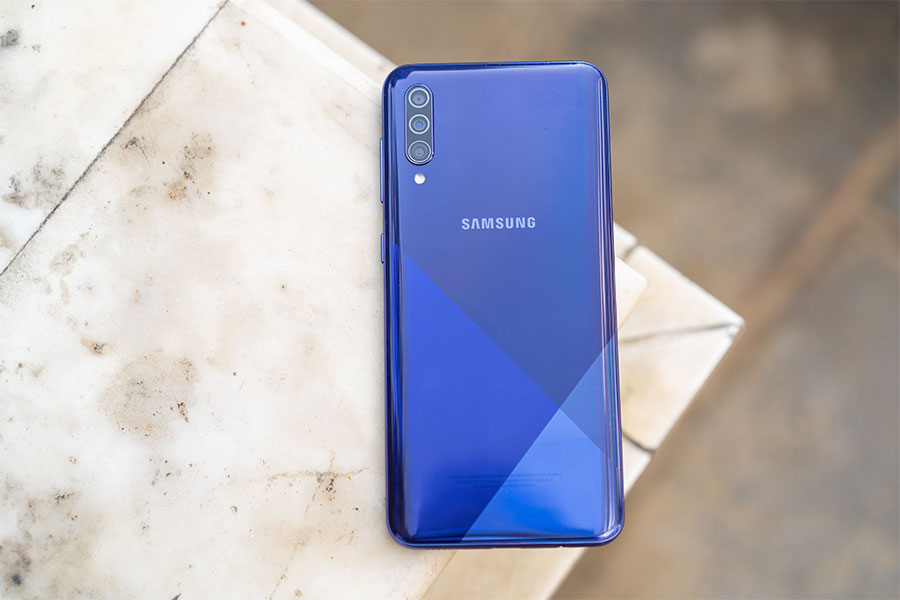 The A30s in Nepal comes in a single configuration with 4GB memory and 128GB storage which can be expanded up to 512GB. A30s also has the same 4000 mAh non-removable Li-Polimer battery with 15W fast charging capability.

The Samsung Galaxy A30s price was initially Rs. 31,890. However, Samsung is offering the Galaxy A30s in Nepal for a price of Rs. 27,499. You can redeem the offer from any Samsung retail outlets or from Smartdoko.com.

Personally, I still think Samsung is asking too much for this model. It sports HD display and a relatively slower processor, whereas you can get Redmi Note 8 Pro with FullHD+ display and a much powerful Helio G90T chipset for Rs. 29,999 (6+128GB variant).

And even if you want Samsung phones under Rs. 30,000, I would recommend the Galaxy M40, Galaxy M30s, and Galaxy A50. They have superior performance, Full HD display, and high res cameras than the A30s. So, it would be wise if you choose them over A30s.