The mid-range segment is getting fiercely competitive. Under the price of Rs. 30,000, there is a cut-throat competition between a number of value for money devices. Most of the mid-range devices come up with the cliché selling points like processor and camera. But in that race, Samsung came up with something unconventional on the M30s. With 6000mAh battery, Galaxy M30s promises an enduring battery life. But what more has it to offer? We are going to explain that in this Samsung Galaxy M30s review.

So, before I got this phone, I expected it to be very bulky and uninspiring as phones with big batteries go, but that was absolutely not the case. It’s actually not very heavy and has good grip thanks to the curved sides. And although it’s made of plastic, it doesn’t feel that cheap.

Maybe the things to complain about here are, the choice of colors which is absolutely rubbish in my opinion and the way these triple cameras are aligned in this fashion, this could definitely have been a little minimalistic. It just feels like Samsung is trying to copy iPhone or Google Pixel 4. Also, since it has plastic all over on the back and the frames are not metal either, so durability, in the long run, could be a concern. So, I would advise you to case it up. 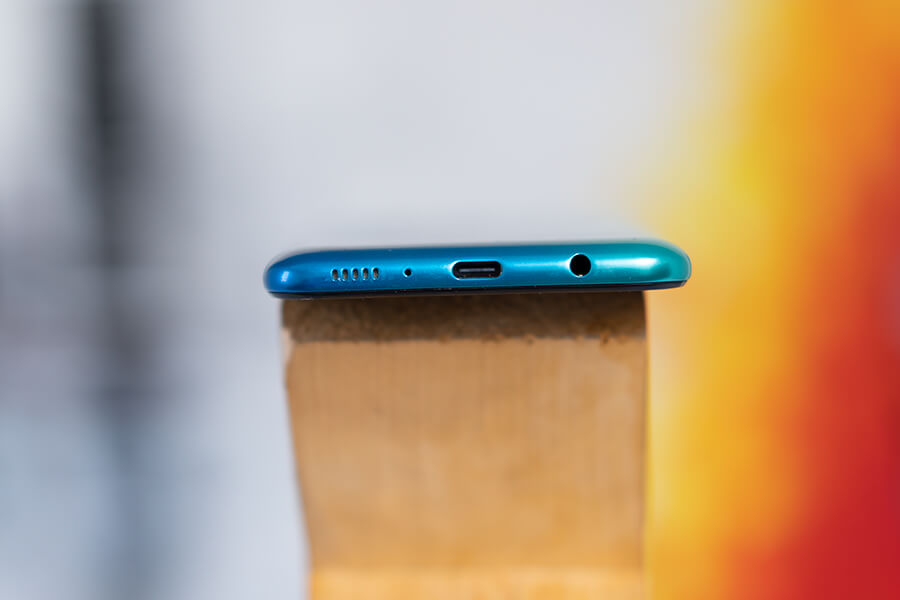 Continuing with the design, you get a single firing speaker on the bottom, which, by the way, sounds quite average. But Samsung has brought back the 3.5mm headphone jack after its omission on the Galaxy M40. So the audiophiles have something big to cheer here. 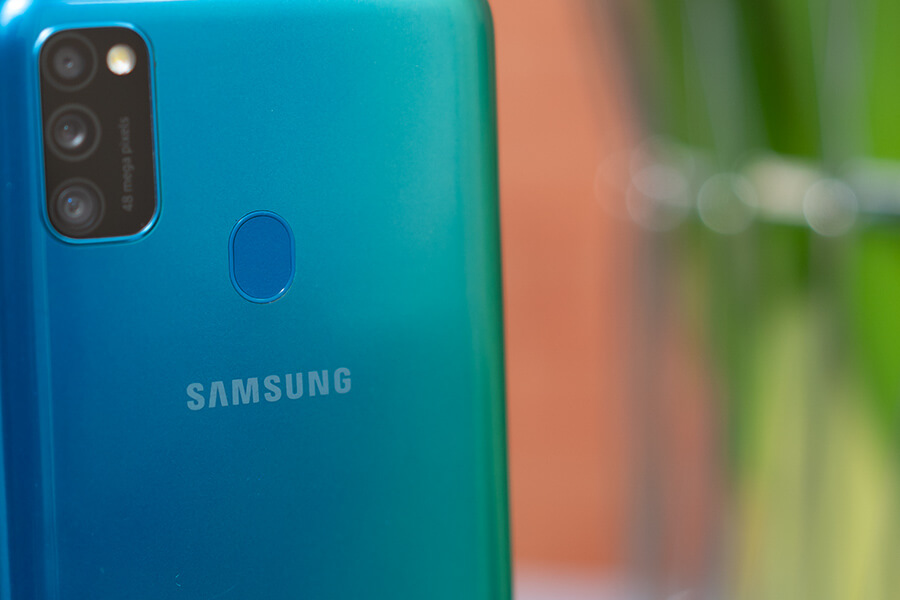 The M30s also offers a fast fingerprint sensor. And since I was used to slow sensors on Samsung J-series in the past, the faster fingerprint sensor on the M30s is a welcome addition. There’s also a not-so-reliable software-based face unlock, which is fairly accurate and fast as well.

On the front, you get what other midrange phones are offering in 2019. A 6.4-inch FullHD display with thin bezels, a small U-shaped notch on the top and yes, a thick bezel on the bottom. 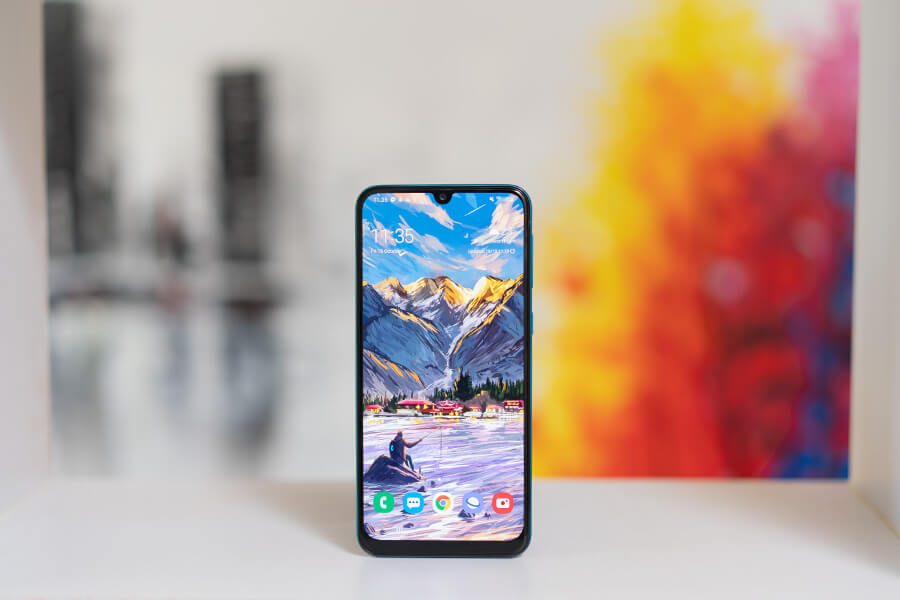 However, unlike other mid-rangers out there, Samsung utilizes a Super AMOLED display instead of an IPS panel. This means you get superior quality than the IPS ones. The colors, contrast, and brightness levels are great for the price.

Now, talking about inside of the phone, you get Exynos 9611 chipset running the show. It is available in 2 memory variants, One with 4GB RAM and 64GB storage, and the other with 6GB of RAM and 128GB storage.

The 4GB, 64GB is obviously better value for money if you ask me, so I would advise you to go with that.

Now, talking about the Exynos 9611 chipset, it’s based on 10nm fabrication and strangely doesn’t offer any improvements over its predecessor 9610, except this one supports higher megapixel cameras.

The Exynos 9611 is more of a mid-range chipset and fairly a good one. The performance is good, but I wouldn’t say excellent. Having used the Note 8 Pro and the Realme 5 Pro, I can certainly say it’s not as smooth as them.

One possible explanation could be because of how heavy the OneUI (based on Android Pie) is. On the more expensive Note 10, the One UI performs like a champ. The transition and even opening of default apps like phone dialer is smooth, but with M30s, there is a hint of slightest of lag. You might not even notice this, but as a reviewer and having to test all the phones, I can definitely tell this is not the smoothest midrange phone.

But what’s surprising is the Exynos 9611 should be able to handle such transitions, so maybe Samsung could work on optimizing One UI more on their budget and mid-range phones too.

Despite all that, One UI is still my favorite skin. From multitasking tray to notifications panel to the settings dashboard, everything feels minimalistic and modern. I also turn on the night mode, because not only this save the battery, but because I like it as well.

Talking about the gaming performance, the Mali G72 MP3 GPU is average, PUBG runs at HD graphics and High frame rates by default, but I had to either lower down the Graphics or frame rates for the stutter-free experience.

Even the recently launched Call of Duty has stutters and lags in medium settings and is playable only in low settings.  Also, after like 30 mins of PUBG and COD, I noticed some heating issues at the back of the device.

So, the M30s is not the best performing phone at this price, especially when it comes to gaming. For gaming, I would recommend a more capable phone like Samsung Galaxy M40, Redmi Note 7 Pro or the last year’s flagship killer, the Poco F1. If you can wait, Redmi Note 8 Pro can be another good choice as it comes with a much superior MediaTek G90T gaming chipset. The phone is slated to launch in November. Honestly, I was really skeptical at first regarding the cameras, because the Galaxy M10 and M20 I reviewed had very average cameras, but M30s has “very good” cameras, I would rate them like B+.

The camera by default shoots in 12MP, however, you can go in the camera settings here to change it to 48MP mode. The 48MP takes like 2 seconds to capture the images and has more details when compared with the 12MP mode but consumes like 5 times more storage, other than that, there isn’t any noticeable difference.

Now, the default 12MP shots, when you view them from the AMOLED display, seem over-saturated, but it’s actually very natural when you view it on a color-accurate screen. The images have good colors, details are also fine, and the dynamic range is not bad either.

The wide-angle images also share the same story. It has good colors and most importantly is natural like the primary images. It does miss out on detail if you zoom in, but that’s expected of an 8MP wide-angle shots.

The 5MP depth sensor also does a decent job in terms of portraits. I have seen more expensive phones doing a way worse job in portraits than this one, so I am content with its portrait images.

Moving on to low-light performance, the level of detail is poor and images are not worth showing off, but that’s expected on a midrange phone. Samsung has also included a night mode, but it doesn’t work well.

It messes on the exposure and the images come out overexposed. And if your hands have slightest of shakiness taking night mode shots, your images look blurry. So, I think Samsung needs to re-work on making the night mode better via a software update. The selfies from the 16MP front camera, on the other hand, are also very good. If you are at the right distance with ample lights, you will get some detailed shots with good colors and dynamic range. The selfie portraits also work well and overall, I am happy with the software-based blurring.

As for video recording, the M30s records 1080P and 4K videos at 30fps, and surprisingly there is no 60fps on both of them. The 1080P videos are stable with an accurate color presentation, excellent contrast, and dynamic range. If you want more details, you can shoot in 4K but there is no stabilization.

You can also use the ultra-wide-angle lens at 1080P for videos. There is also a super steady mode, which is a cropped version of the ultra-wide videos but is stable. There’s also usual 240fps slow-mo and 960fps super slow-Mo options, which do an okay job.

So, just to see how good the cameras on the M30s is, I also compared it against the Redmi Note 8 pro. And to be honest, in many aspects, both phones do a similar job. The main difference in normal images forms the two is that the M30s has a cooler tone whereas the Note 8 pro has somewhat a warmer tone. And color tones are usually up to people’s preference, so I would give points to both.

But one thing I noticed is that the M30s has better colors when it comes to the sky. For portraits, in some scenarios, the M30s does good while at other times the Note 8 pro steals the show. Selfies, on the other hand, look better on the Note 8 Pro. Nighttime pictures are well, bad on both like I said previously for the M30s.

Now, before I talk about the battery. Let’s summarize our review: Design and Build is like 7/10, The Display is a solid 9, Performance is well average at 7, and I would give cameras 8/10. This looks like a perfectly fine score to me, but it’s the battery that steals the show.

The 6000mAh battery is a solid 10 for me. It will last you for 2 days on moderate usage and if you are a heavy user who likes to game a lot, and watch videos, it would still give you a day of usage. Like I said throughout the article, the Galaxy M30s is a good smartphone. It’s only in the performance aspect where it could have done better, otherwise, you get surprisingly good cameras and powerhouse of a battery. This one is a competitive mid-range offering from Samsung. So if you are looking to buy a good mid-range Samsung phone, you won’t go wrong with the Galaxy M30s.