Home Samsung Samsung Galaxy A9 2018 Review: A new level of a gimmick? When the presence of a dual camera in a smartphone is becoming mainstream and the concept of triple cameras is still a sapling, Samsung pushed all its limits to provide four cameras in its smartphone. With four cameras at the back, the Samsung Galaxy A9 2018 features a total of five cameras. With plenty of cameras, this smartphone does sound interesting. But how does this smartphone really fares when it comes to real life usage? Find out in this Samsung Galaxy A9 2018 review.

Since the cameras are the major highlight of the phone, let’s begin the review with the camera. As mentioned earlier, the phone carries a quad camera setup at the back. Accompanying the primary shooter, there are three additional lenses – each one doing a unique task. So let me explain each one of them.

The topmost camera among the four is an ultra-wide angle lens. This camera lens is an 8MP sensor and a f/2.4 aperture. It basically extends the field-of-view up to 120-degrees, just as wide as the pair of human eyes can see.

The second camera on the Galaxy A9 is the telephoto lens. Paired with a 10MP sensor and f/2.4 aperture, this camera promises to capture images with 2x zooming without any loss in the image quality. 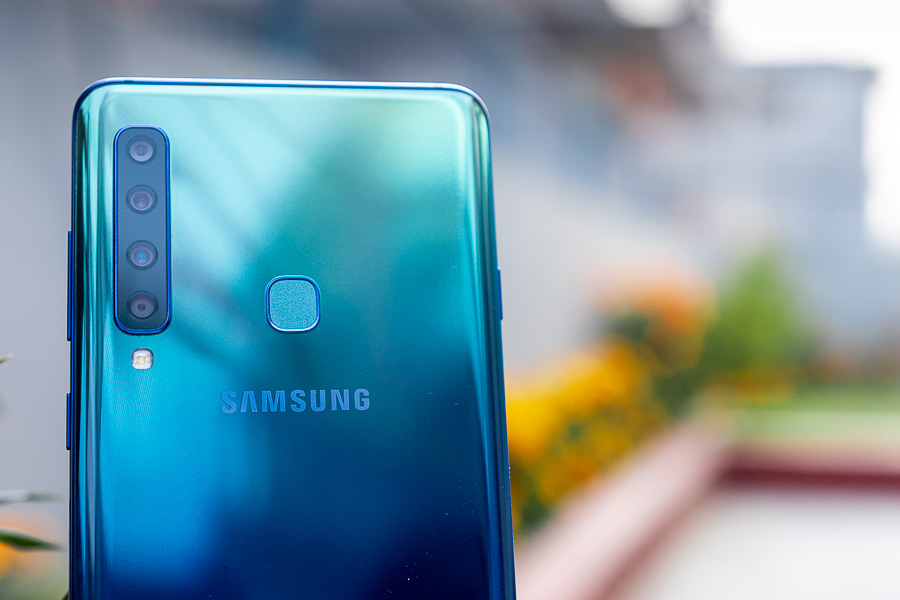 The primary shooter lies on the third from the top. It is equipped with a 24MP sensor and a wide f/1.7 aperture. The major purpose of the wide aperture is to let in a plenty of light into the sensor which helps capture amazing images even in the low light settings.

The last one is a 5 MP depth-sensor with f/2.2 aperture. Now, you all know what a depth sensor does – highlighting the subject and blurring the background to give portrait images with bokeh effects.

Yes, the phone seems to have all sorts of lenses. And so, I had all sorts of expectations from it. But it was a huge blow when I took photos. The primary camera, despite being rich on the megapixel count with a 24MP resolution, couldn’t quite pack sufficient details into the images. It wasn’t the case all the time but I also had problems while focusing on the subject. And that’s not all, some of the captured images even had slightly inaccurate colors.

In low light settings, things worsen more. The already not-so-sharp images lose details further with noise and what not. And some of the images were absolutely useless.

Disappointed with the primary camera, I toggled to the ultra-wide angle setting. The ultra-wide angle lens also did not fare any better. It, too, lacked the punch when it comes to details. I also noticed a slight change in color temperature in the images from the primary camera and the ultra-wide camera. The captured images also seem to have a fish-eye effect with a slight visual distortion near the edges due to which the images quite look slightly hemispherical.

With these disappointments, I was still expecting positive results from the telephoto camera. But adding insult to the injury, the telephoto camera dejected me further. Although Samsung claims it can shoot with lossless zooming, the captured photos said otherwise.

And lastly, I toggled to the Live Focus option to turn on the depth-sensing camera. I captured a fair amount of portrait images. Just look at these portraits, you can yourself observe the jittery edge detection and unnatural blurs. Yes, it has the option to select the focus area and the blur intensity; it still was hard to obtain a decent portrait image sometimes.

The rear camera on the phone failed to bring decent results. So, the Quad camera setup on this phone looks simply appears to be a gimmick and nothing more than a stunt – which, they failed. We have seen Samsung making compromises on other aspects of the phone previously, but never on the camera front.  The A9 failed to bring decent results on my tests, and this was a hard truth to swallow.

So I thought to reach out to Samsung, thinking that this may be a faulty review unit. And promptly, I was told that the review units everyone is getting are betas, i.e. not fully functioning well. I was told that the retail units, which would go to the customers, would have polished software and won’t have such kind of issues. But during the review period, the phone was not available for sale to the customers and I couldn’t check the differences. When they do become available, we might have to perform an in-depth camera review for everyone out there if Samsung indeed delivers as promised. But for now, it is what it is. 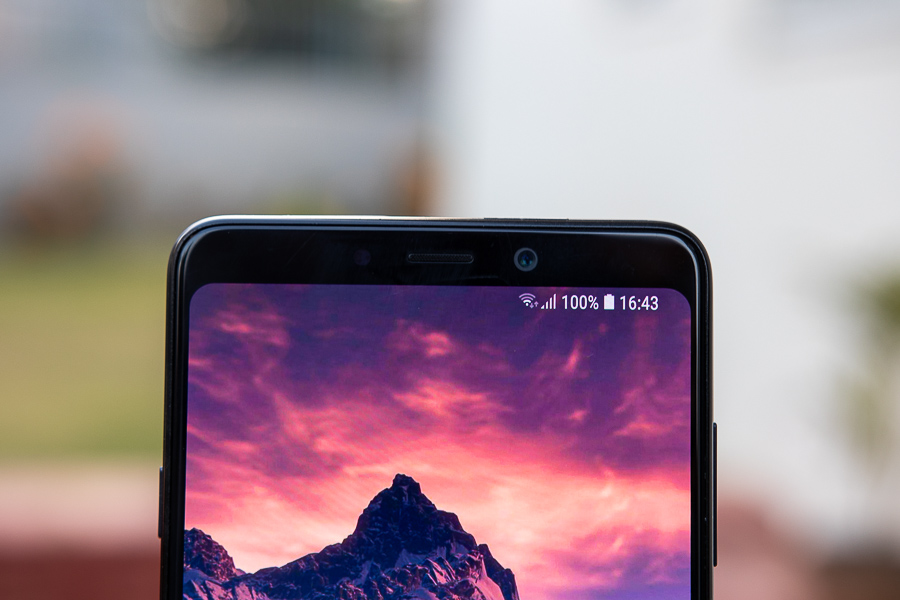 Continuing with the camera, there is also a 24MP selfie camera on the front, which, unlike the rear camera captures amazing images. And this is also why I refused to believe that the rear cameras are the way they are. There is also a selfie focus feature to capture the portrait selfies. Since there is just a single camera on the front, software does all the works on blurring the background. So the portrait selfies lack proper edge detection but it was decent enough for my liking. I sincerely hope, for the sake of Samsung fans, and Samsung themselves, that the retail units do perform better than these.

To check out all the images in high resolution, Click here.

Now, let’s dive into some other aspects of the phone. When it comes to design, the Galaxy A9 looks absolutely stunning. It comes with a tall and sleek body wrapped in a plastic back and reinforced with a metallic frame. A plastic body on a premium mid-ranger surely does not sound appealing. But it is so cleverly crafted that it gives a feel of a glass back. And while holding the phone during my usage, it offered me a premium impression.

All the buttons are on the right, at least all the important ones, anyway. The dedicated Bixby button is on the left, which I accidentally pressed countless times often being mistaking it with the volume button. I don’t use it much, and I can’t think of anyone who does either. But the sad part it is, it neither can be turned off nor can be remapped. So you have to learn to live with that!

At the back, the fingerprint sensor is at a good location. Just where my finger rests while holding a smartphone. So, unlocking the device wasn’t a problem for me at all.

On the display front, the phone comes with a 6.3-inch Full-HD+ display featuring a Super AMOLED panel. With a Super AMOLED panel at disposal, the contents on the handset look lively with appreciable contrast ratio. Viewing angles and color accuracy are also impressive. During the review, I got a chance to compare it with the OnePlus 6 and in the comparison, I did not find any major differences. That definitely cues a premium quality display. So Kudos to Samsung! Furthermore, the screen on the phone is also sufficiently bright and I did not have any issues even while viewing the contents even on a bright sunny day. But the thing that bugged me on this phone is the absence of notification LED lights. This phone, however, has “Always On display” feature as a replacement for that. But this feature does not quite alert the users about the notifications and it also consumes a considerable amount of power than the notification LEDs. So the replacement did not quite console me. And all this even with bezels on the phone is questionable. But, what did please me was the generosity in the memory side. The phone has a good 6GB RAM and 128GB of storage. On top of it, there is a dedicated SD card to expand the storage further. So with plenty of RAM at the helm and a decent chipset on board, the phone performs remarkably well. Multitasking and switching between apps is also blazing fast. Similarly, while playing games, the phone does not sigh with the fatigue. Playing light games was a breeze on this phone.

It did try to maintain the consistency even while playing graphics intensive games but hadn’t been quite successful. Although the counts were minimum, I noticed lags and stutters, which occurred mainly while playing Asphalt 9 in high settings and PUBG in medium settings. Considering the price, it’s not very convincing.

The Galaxy A9 2018 comes with the Android Oreo out of the box with Experience UI on the top as usual. Like all the other Samsung smartphones, this one too comes with tons of bloatware. But since most of them can be disabled or uninstalled, there is nothing much to worry about.

But what did bug me was the inclusion of Android 8.0 Oreo on the phone. Since the phone was launched after the rollout of the stable version of Android Pie, I was hopeful about the phone receiving the latest software, which is not the case here. But maybe, the retail units, like Samsung claims, will come out with Android Pie or, if not, the phone might receive one pretty soon. Until then, it’s fingers crossed.

The aspect, where the Galaxy A9 2018 shines is on the battery front. The phone rocks with a massive 3800mAh battery, that’s truly respectable. Since the A9 2018 features an efficient processor and a low power consuming display, it does really well when it comes to backup. The phone lasts easily for a day and a half on normal use. I always ended up with 35 to 40% at the end of the day. So I am entirely satisfied with the backup.

The phone also comes with a quick charging support. Although it is marketed as fast charging, it was not fast enough for my liking. The handset takes around 1 hour and 40 minutes to get the battery fully charged. So when it comes to charging speed, the phone lags behind the smartphones like OnePlus 6T and Vivo V11 Pro by a huge margin.

To sum it up, the A9 2018 is really a great device. It has got the fancy design, capable chipset, remarkable display, and a respectable battery life. On the camera department, we couldn’t pass a solid judgment. But even if the cameras were great as Samsung promised, the phone still doesn’t make sense at this price despite having so many great features already. At a similar price, if you can buy the OnePlus 6T, which is better than the Galaxy A9 2018 in almost every aspect. So why settle for the A9?