Home Samsung Samsung Galaxy A9 2018 unveiled: 4 is the charm? While the world is figuring out what triple cameras on the rear side of the smartphones do, Samsung has launched the Samsung Galaxy A9 2018, a smartphone that has four different cameras on the back. The launch comes after numerous leaks and rumors that had suggested about the Korean Giants’ plans to release a new smartphone with quadruple cameras.

The Samsung Galaxy A9 2018’s rear-facing four cameras are meant for a few different purposes – four in total. There is the primary 24-megapixel camera with f/1.7 aperture that is accompanied by a 5-megapixel lens with f/2.2 aperture meant solely for applying depth. 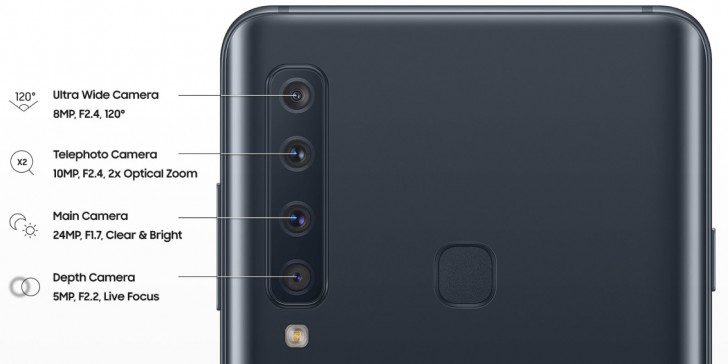 Likewise, there is a telephoto lens measuring 8-megapixel with f/2.4 aperture while the final lens is meant for capturing wide-angle shots with the 10-megapixel f/2.4 lens.

The Samsung Galaxy A9 2018 has followed the Galaxy A7 2018 which features three cameras in total.

The camera setup on the Galaxy A9 2018 is something that we haven’t seen before. It has tried to cover up all the necessities while taking a picture with a single device.

The device has a tall 6.3-inch Full HD+ Super AMOLED display. It has an 18:9 aspect ratio screen that is clad by minimal bezels on the top and the bottom. It is powered by the popular the octa-core Qualcomm Snapdragon 660 processor that is coupled with 6 GB or 8 GB of RAM according to a user’s preference. For selfies, the Samsung Galaxy A9 2018 has a 24-megapixel selfie shooter with f/2.0 aperture which we have already seen being used with the Galaxy A8 Star and the A7 2018. For storing all your selfies, this device features 128 GB of internal memory that is expandable up to 512 GB via a microSD card slot.

For lighting up the display and powering the CPU, Samsung has included a 3,800 mAh battery inside. There is a rear-mounted fingerprint scanner on the device above the Samsung emblem.

Samsung Galaxy A9 2018 Price and Availability

The Samsung Galaxy A9 2018 is priced at €599 which roughly translates to $725 which is a bit expensive for the internals of the device. The pricing makes it a bit more expensive than the OnePlus 6 and the newly launched Razer Phone 2. It will be available internationally starting the first week of November.