For the past couple of months, I have been using the Samsung Galaxy M51 as my secondary device and here I’ll be discussing it in this long-term review. It brings a big 7000mAh cell, a Super AMOLED screen, and a capable camera setup under the 40,000 price tag. But since the Galaxy M62 and Redmi Note 10 Pro Max is launching soon, is the Galaxy M62 still the best phone under Rs. 40,000 in Nepal? Let’s find out here.

Galaxy M51 is kind of a different taste of a phone than what Samsung usually offers in its mid-range segment. I have always liked Samsung mid-rangers when it comes to camera optimization, battery life, and its vivid AMOLED display. However, it was always lacking in the performance department because of Samsung’s audacity to include its in-house Exynos 9611 chipset in all most all of its midrange M and A-series of phones last year.

With the Galaxy M51, not only has the company included a much better SoC, but they have also improved the software optimization, which I’ll definitely get into in full detail in just a minute. Anyway, allow me to elaborate long-term experience with the Samsung Galaxy M51 in this review.

Let’s start with the design. Well, needless to say, Samsung hasn’t done anything drastic in this aspect and we have seen this design choice many times before. Actually, it just looks like a beefed-up version of the Galaxy M31. The back is still plastic with a shiny finish and with the plastic side frames, it does raise some concern about prolonged durability. Thankfully, throughout my usage, the most that’s happened is a few scratches on the back.

And it’s surprising how this rear panel is so prone to scratches. I mean, I used the phone without a cover for just 3 days initially and it had already suffered tiny visible scratches at the back. So, using a good case is highly recommended from my side.

While the look of the phone definitely is pretty basic, I wished Samsung brought the gradient design of its A-series on the higher-end M-series models too. Overall, visual flair is not one of M51’s forte and if you are someone who wants to flaunt a good-looking smartphone, then you are better off with offerings from OPPO or Vivo.

That being said, Samsung has always had a good reputation for providing great displays and that tradition continues on the Galaxy M51. You get a big 6.7-inch Super AMOLED screen with a centered non-obtrusive punch-hole cutout. It’s a quite pleasing display to look at as well. So, throughout my usage for the long-term review of Samsung Galaxy M51, I’ve had a great time viewing different kinds of content on this display.

However, even with its AMOLED heritage, you don’t get an in-display fingerprint sensor here. Maybe that’s a part of the cost-cutting process! But I certainly am not complaining about it though because Samsung’s implementation of under-display fingerprint readers has never been the fastest. This side-mounted one, on the other hand, is fast and gets a correct reading almost all the time. Initially, there were instances where I would struggle to locate the sensor as it is placed a bit higher than I’m accustomed to, but slowly I got used to it, and it’s all fine now! Back to the display, it’s fairly bright so I’ve had no problems reading or using social media while basking in this winter sun.

The one tiny complaint I have, which I guess many of you do too, is that this screen refreshes at just 60Hz. Maybe, Samsung could have included a 90Hz panel, given its direct competition like the OnePlus Nord has one. Yet, the price of OnePlus Nord here in Nepal is more than $100 higher than that of the M51, so that’s an incomparable issue. But, in markets like India, both these phones are priced very similarly, thus giving the OnePlus Nord an edge.

But, other than the lower refresh rate, trust me there is hardly anything not to like about this display. It has excellent contrast and the touch sensitivity is top-notch too. And I have to say that no other Android manufacturer does dark mode better than Samsung, so I quite like what we get on the display side of things.

And not to forget the undisputed, amazing battery life you get on this phone. During the entirety of the review period, the 7,000 mAh battery in the Samsung Galaxy M51 gave me no less than a 2-day endurance on my use meaning that I only had to charge it once in two days.

That was with my regular usage pattern wherein I would make and pick calls every now and then, write some emails, watch a few videos, play a game or two along with using being active on my social media throughout the day. 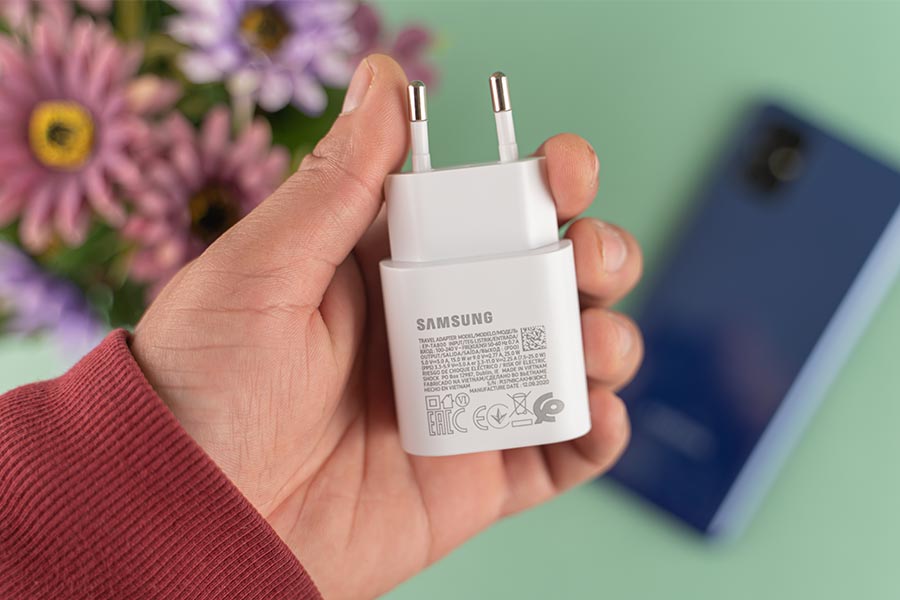 Yet, I am not going to lie, despite the terrific battery endurance, I do wish the charging speed could have used a little bump though. Yes, 25-watt Power Delivery charging is pretty fast, but this huge brick of a battery takes 1 hour and 55 minutes to get juiced up, so if you forget to charge it overnight, be prepared to wait for 2 hours in the morning.

Now let’s get to the performance. Like I mentioned earlier, contrary to the Exynos 9611 in most Samsung mid-range phones, the Galaxy M51 features Snapdragon 730G, which is one of the popular choices in the mid-range category.

With this, I can finally say that the performance of a mid-range Samsung phone is actually good. Plus, the company has optimized its One UI here pretty well. As a result, you will get a good user experience on this device. From normal everyday tasks to even multitasking with heavy apps, things are quite fluid. The Galaxy A71 that shipped with a similar Snapdragon 730 chipset isn’t smooth as the Galaxy M51, so it’s great to see Samsung work on memory and CPU management to provide a better experience.

Gaming too is a fun ride here. PUBG Mobile runs quite nice in Smooth graphics and Ultra fame rates all the while being ever so slightly jittery in High frame rates and HD graphics setting. Still, the cheaper Redmi Note 9 Pro Max and the Poco X3 has slightly better performance in PUBG under the same HD graphics and high frame rates. But again, the difference is a very thin line, so I guess it does not matter so much I guess. 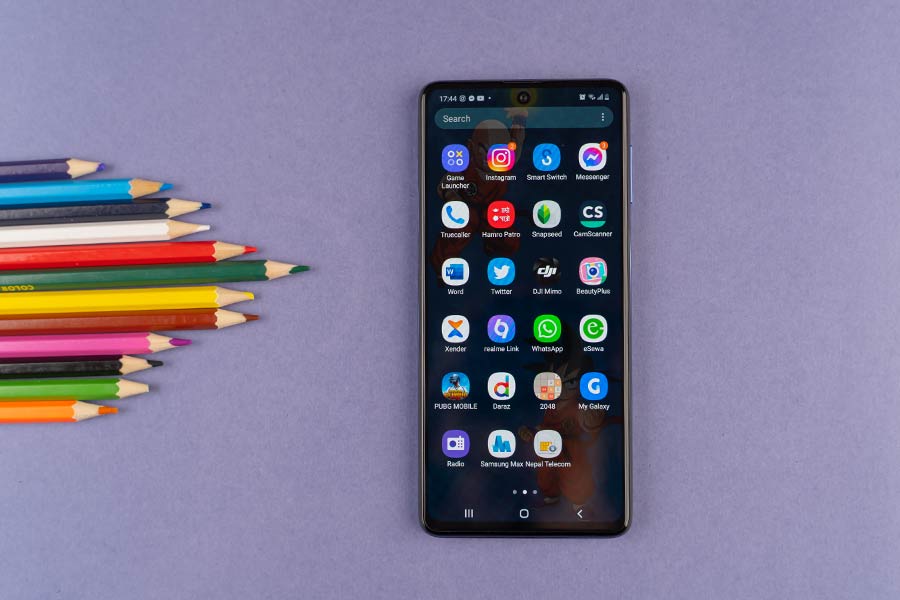 Likewise, COD runs silky smooth even in the maximum of graphics and frame rate settings. And the best part is that even when you’re game continuously for quite a long time, the phone is still able to maintain low temperatures and amazing battery endurance. For instance, one hour of continuous PUBG and COD gaming only took away 9% of its juice which is awesome!

Apart from that, I am not a big fan of the single firing speaker here too. Its output, in my opinion, is strictly average in terms of loudness and overall quality. It does not distort when maxing out the volumes, but it does lack depth. Why am I complaining about this is because, it has such a great display and battery life, so, if it was paired with better speakers, it would have been a great multimedia device too.

Okay, enough of the complaints now. Let’s get to one of the best things about this phone, which is the cameras. Galaxy M51 has a total of 5 cameras, four at the back and one at the front. The back houses the 64MP primary, 12MP ultra-wide, 5MP depth, and macro sensors while there’s a 32MP snapper on the front.

The primary images, just like how it is with all Samsung phones, has that punchy undertone that grabs attention at first sight.

Plus, its HDR function works quite fine so you won’t get dark images whatsoever as it handles shadows and light pretty well. Furthermore, the details are on point too, so I am quite happy about how the images turn out.

And not just with the ultra-wide shots, primary images from the V20 compete with the M51 really well.

The difference lies in the color tone where the V20 is more yellowish while the M51 has a reddish tint. But other than that, I have not been able to firmly decide which one’s better.

Even portraits look equally good from both phones.

It’s just that Samsung manages to bring out a slightly better bokeh effect than Vivo. Otherwise, subjects and background look good on both.

Also, I’ve not been able to choose a clear winner in terms of selfies. Both devices manage to shine in their own ways.

V20 has a slightly yellowish tone while Samsung’s selfies look a-bit pinkish. Besides this, the details and colors are once again, neck-and-neck.

It all boils down to personal preference to determine the subjective winner among these phone’s selfie camera.

Moving on, the nighttime shots have similar attributes just like the daytime ones too.

Only the color reproduction side of things look slightly different, but other things are almost the same.

Getting to the videos, it’s quite weird how both these phones cannot shoot 60fps videos at any resolution. Here, the 30fps footages under both 1080p and 4k resolutions are well stabilized, thanks to Gyro EIS. But what I can say is that Vivo V20 does a better job at maintaining the exposure compared to the Galaxy M51.

Overall, the Samsung Galaxy M51 is a reliable midrange camera phone just like the Vivo V20. And I am really happy to see midrange smartphones doing so well in this category. With Xiaomi bringing a 108MP camera sensor in its latest Mi 10i, things are going to get even more competitive in 2021’s mid-range market.

Alright, other things such as the call quality and network reception have never disappointed me in any way. It’s been around two months that I have been using this phone and I have not received a single complaint from anyone on the receiving end, so that’s great.

Summing it up, I think the Galaxy M51 is still a great midrange phone under Rs. 40,000 in Nepal. It offers an excellent display, great camera quality, a competitive chipset and a well-optimized UI. However, if you want a better-looking phone and a higher refresh rate display, the Galaxy A52 would be a better choice. Likewise, Samsung will be launching the Galaxy M62 as early as next week that offers a better chipset (Exynos 9825). But it’s going to cost a little more than the M51, which is now available at as low as Rs. 38,000.