Sony’s RX100 camera series has been the capable and pocketable point-and-shoot cameras since their debut. With a 1″ sensor and some great optics from Zeiss combined with its compact size, this is an ideal camera for things like travel photography. And Sony very recently launched a new iteration in the RX100 series – the Sony RX100 VII. And this one has quite a few important improvements that make it a complete machine for Vloggers.

Most important of the upgrades, seems to be the addition of a 3.5 mm audio port or a mic port. Because that was stopping the older RX100 VI from being a complete vlogging tool. You don’t want to rely on the camera’s inbuilt mic, do you? So, now, with this, it finally becomes highly suitable for vlogging purposes. 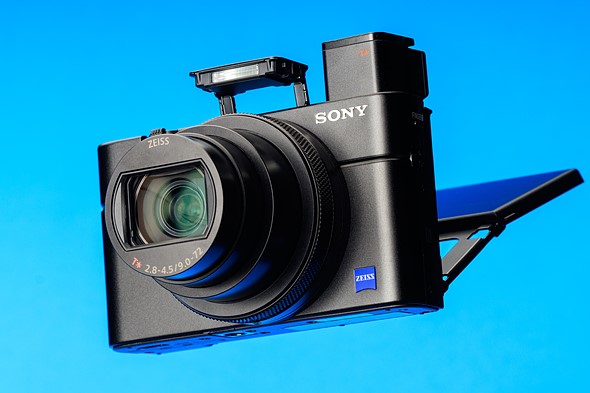 Another significant upgrade is the Real-Time Tracking and Real-Time Eye Autofocus on the camera. It works in both stills and videos, and it even works on animals. It uses predictive AI and recognition AI to track your subject. So, if nature photography is your thing, then, this could be a great gear for you. Sony has been working on its Autofocus technology. And it now claims that the Sony RX100 VII’s autofocus is the fastest in the world, locking the subject in about 0.02 seconds. Also, it now has 357 Phase Detection AF points and 425 Contrast-detection AF points – a feature available in the like A9 and A6400.

In addition, there’s this Single Burst Drive Shooting Mode which allows you capture some fast-paced action. On a single click, it will present you with 7 images – which means better odds of capturing quick moments!

Other improvements are in the sensor. While the lens on the Sony RX100 VII is the same as last year’s – a 20.1 MP 24-200 zoom lens with an f/2.8-4.5 aperture that offers up to 8.3x optical zoom – the 1″ sensor is upgraded to a stacked Exmor RS CMOS sensor with the latest-gen BIONZ X image processor.

As for videos, you have 4K video capabilities with no pixel binning, improved image stabilization, vertical video recording and super slow-motion of up to 960 fps.

The Sony RX100 VII will cost you about $1200 when it comes out later in August 2019. However, you will also be able to buy a shooting kit comprising of a handheld bracket, a mic pocket, and two rechargeable batteries for an additional $100.

What do you think of the price to the feature ratio in the Sony RX100 VII? If you were a vlogger, wouldn’t this one be a great machine?