The Aspire 5 from Acer has always been popular among students, officers, and anyone looking for reliable performance on a budget. The 2022 iteration of the laptop is among the cheapest 12th Gen Intel laptops that you can buy right now in Nepal. So, is this laptop for you? Let’s find out in this review of the Acer Aspire 5 (2022).

Before we begin the review, let’s take a quick look at what the Acer Aspire 5 (2022) offers in terms of specifications.

The variant that I tested has the Intel Core i5-1235U with 8GB RAM and 256GB SSD. It retails for around NPR 92,000. If you want something even cheaper, there is also the Core i3 variant, but I decided to skip that one. That’s because not only was I looking for an affordable laptop, but also something that would age better and one that could handle some office work without any hiccup.

Okay, let’s start with the design side of things. When it comes to budget laptops, a lot of brands tend to cut corners here, and Acer looks to be no exception. This plastic chassis with an aluminum-clad lid is reminiscent of the Aspire 5 (2021). Acer has changed a few things here and there, like the placement of its branding on the lid and the exhaust vent, but that’s about it.

The lack of a fresh design would not have been a problem if Acer had worked on strengthening the existing design though. As things stand, the Aspire 5 (2022) feels a little clumsy, even for a budget laptop.

Its keyboard deck also has a lot more flex than I’d like. Then again, this is something you should be able to overlook since the flex is hardly noticeable when typing in real life. The keys feel a little mushy—yes—but it’s nothing I can’t live with.

Sadly, my unit doesn’t offer backlighting, while there are other models of the Aspire 5 (2022) with a backlit keyboard. So, if you’re someone who works at night or in a dimly lit room a lot, this is something you should know.

But what I appreciate is that Acer has given a dedicated Numpad here, which is getting harder to find even on 15 or 16” Ultrabooks these days!

That aside, I’m pretty impressed with this trackpad. It’s relatively large and responsive, and I also did not have any problem with gestures here. But just like the keyboard backlighting, my unit of the Aspire 5 doesn’t include a fingerprint reader either.

Now, before I talk about its display, I gotta address this rather alarming issue. While that keyboard deck flex is pretty dismissable, I simply can’t ignore the gap between the screen and the plastic bezel. It’s likely that in the long run, dust and similar small debris can accumulate there, which could cause some damage to the screen.

As expected, the actual quality of this 15.6” screen is average at best. I mean, it’s not the brightest or the most vibrant display out there, but I had no trouble using it indoors for things like editing documents or streaming YouTube videos.

However, if you’re into graphic design and stuff, then you’ll want to look elsewhere because the Aspire 5 (2022) color coverage is too low. Also, the low contrast ratio and poor viewing angles of my unit make me believe it’s a TN panel, so watch out for that as well. One more thing. Acer has still used a 16:9 aspect ratio here, at a time when 16:10 displays are getting common even on budget laptops.

I’m not suggesting this is a dealbreaker or anything, but that tiny bit of extra vertical screen space makes quite a difference if you’re a programmer who has to review long lines of codes or just someone who does a lot of reading.

Its bezels on the Aspire 5 (2022) are also pretty thick and the one on the top houses an HD webcam, whose quality is fine for an entry-level laptop I’d say—especially when you’re in a well-lit room.

And the bottom-firing speakers are good enough for binging Netflix or casually listening to music, but nothing too fancy. I would have also liked it more if it got a little louder but budget laptops aren’t known for their outstanding audio anyway. Okay, let me now talk about the most exciting aspect of the Aspire 5 2022, which is definitely the performance. Compared to the Core i5-1135G7 on its predecessor, the new 12th Gen Intel Core i5-1235U CPU brings significant improvements.

First and foremost, it introduces a hybrid architecture with two performance cores with hyperthreading and eight efficiency cores, taking the total core count to 10. In contrast, the i5-1135G7 is just a 4-cores / 8-threads CPU. 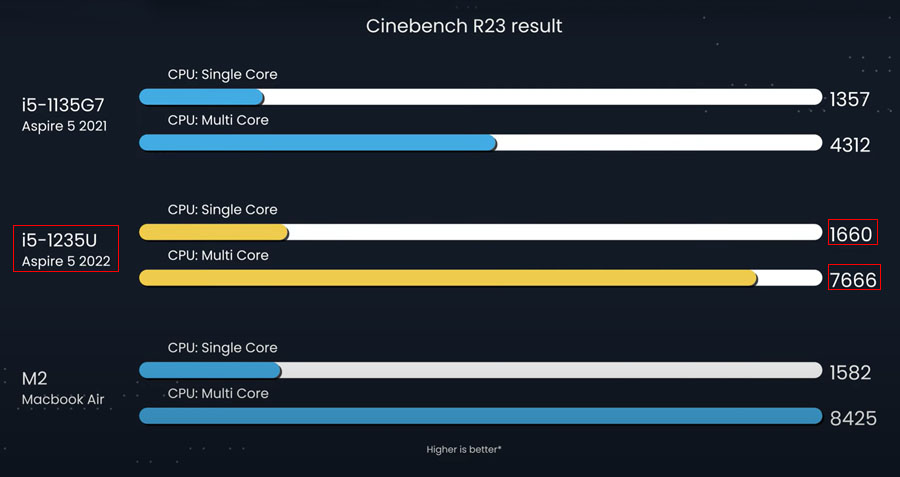 And as you can see from these Cinebench results, the generational performance gap is night and day—with around 22% higher single-core and a massive 77% higher multi-core score on Cinebench R23. It even outshines the new M2-powered MacBook Air in the single-core test!

Benchmarks aside, the Acer Aspire 5 is no slouch in real-life performance as well. I had no problem carrying out my regular office chores on this thing, which includes writing and editing scripts alongside multiple Chrome tabs opened at once. Even when adding Photoshop into the mix for some light editing, I never encountered stutters or any kinds of slow-downs.

I believe this can also be a good option for college students getting into the world of programming. I was pretty impressed with the fluidity of this laptop when running some small C# projects on Visual Studio 2022.

But if you are serious about coding, I’ll recommend using the extra SO-DIMM slot to upgrade the RAM from 8 to 16GB, since IDEs like Visual Code are known to be memory hoarders. And let’s be honest, you will have multiple Stack Overflow tabs open in the background most of the time as well, so you’re gonna want that additional RAM. 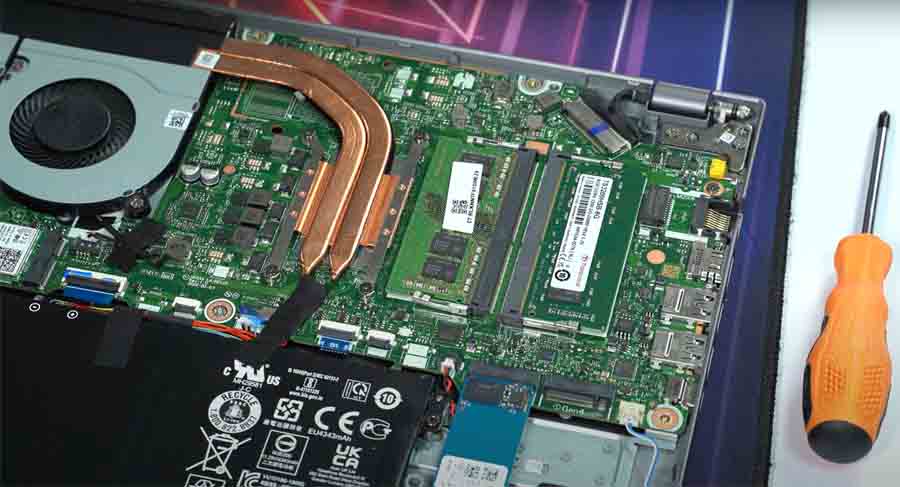 On the other hand, I’m equally impressed with the cooling system of Aspire 5 (2022). The laptop never really got hot in my daily usage and I did not even hear the fan kick in until I tried playing some games. But since this guy does not have a dedicated graphics card, I restricted the gaming test to a few CPU-bound games at low settings only. 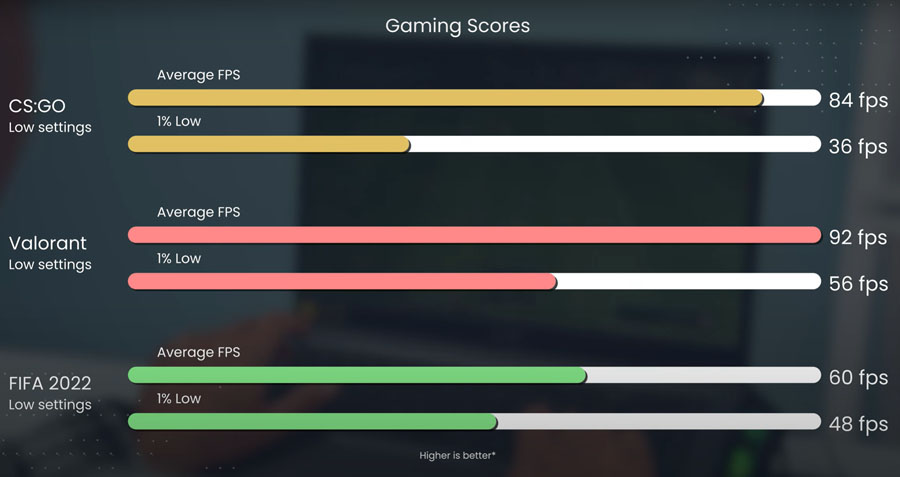 On CS: GO, it managed 84.4 fps on average with 36 fps 1% low. I did notice a few stutters here and there, but that didn’t impact the gameplay by a lot. Same thing on Valorant with the average and 1% low fps hitting 92 and 55.8 respectively. I also played FIFA 22 here which ran at a consistent 60 fps on average.

So yeah, the Aspire 5 (2022) can handle some lightweight games, but don’t expect anything more.

Okay, while the Aspire 5 remains cool enough under regular usage, its cooling system shows its limits when gaming. After three back-to-back sessions of Valorant, I recorded the surface temperature around the WASD keys at 40°C. Acer’s dual-fan setup directly opens to the bottom right portion of the screen, and that area gets as hot as 48°C under continuous gaming sessions. This gives me yet another reason to fear for the display’s safety in the long run! 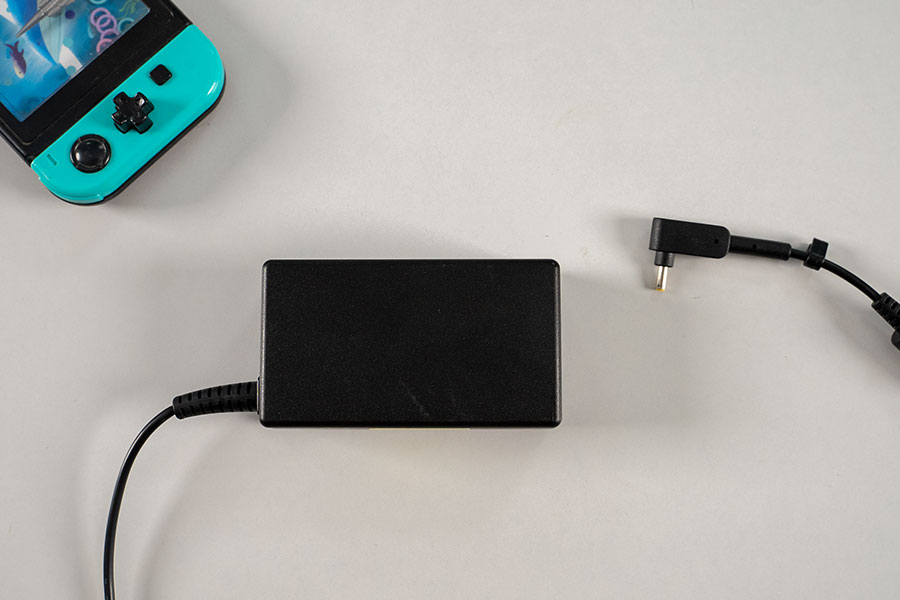 On to the battery now, the Aspire 5 (2022) comes with a 50Wh cell, which lasted me around 5 hours on average. I mostly used it under the Performance mode using the Function+F shortcut, and you can get slightly longer screen-on-time under the Silent or Normal profiles.

The laptop fuels up through a traditional 65W round-pin charger that comes in the box. But you can avoid the hassle of carrying it around for a more compact PD charger instead since it has a Thunderbolt 4 port. You can even use it to connect to an external monitor if required.

Apart from this, there are three USB 3.2 Gen 1 Type-A, one HDMI, an ethernet port, and a Kensington lock slot. As for wireless connectivity, it even supports the latest WiFi 6E standard, but of course, you’ll also need a WiFi 6E compatible router to make the most out of it. Then there is the usual stuff like Bluetooth 5.1 to connect wireless peripherals.

Okay, that brings me to the end of this review. I believe it’s an easy recommendation for students or freshers who are looking for a reliable daily driver on a budget.

First and foremost, the Intel Core i5-1235U CPU brings significant performance gains over its predecessor. And things like Thunderbolt 4 and WiFi 6E are hard to find on a 600-dollar laptop too. You can even upgrade the memory down the line in case your workflow ever gets more intense.

But that’s not to say it is without flaws—especially in terms of the build quality and display. You can definitely find last-gen laptops with better specs in this regard, but that means they miss out on that sweet-sweet 12th Gen power.