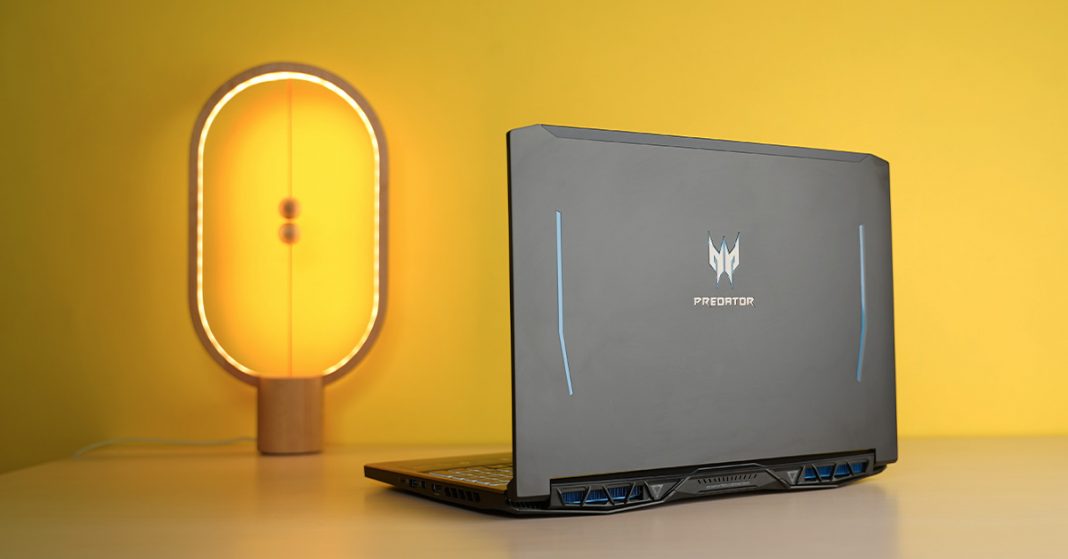 The Acer Predator Helios 300 2019 is probably the most requested gaming laptop review in our comments section. And I finally got to test it! The unit I have with me comes with a 9th gen Intel Core i7 processor, RTX 2060, and a 15.6-inch 144Hz panel, but there are a lot of variants of the Helios 300 including one with a 17.3-inch display. Anyways, let’s dive deeper and find out in detail, what a beast of a laptop the Acer Predator Helios 300 2019 actually is.

Let me start by talking about the designs first. The build quality of the Acer Predator Helios 300 2019 gives out a very premium feel. And that’s down to the metal build of the laptop. The top, as well as the deck inside, is all-metal. The added touch of blue accents on the lid and also on parts the keyboards, further exudes the premium feel. As you’d expect, the logo on the lid lights up too! Despite having a metal/aluminum body for the most part, the back, however, is made of plastic.

I believe the reason for this is two-fold. First, it reduces the weight of the laptop drastically to a mere 2.40 kgs. I sure as hell wouldn’t like to develop back problems from carrying heavy laptops. The next reason for the plastic back is for better airflow and thermals. But more on them later.

Let’s check out the insides now. As with most gaming laptops these days, the thin bezel game is strong in the Acer Predator Helios 300 2019 too. And similar to the rest, you’ll find a 720p webcam on top here as well, that frankly speaking, seems of no use to me as I found its quality to be subpar only. Now, the keyboard as you can see is a full-sized one. If you have had experiences with Acer laptops in the past, namely the Acer Nitro 5, you’ll find that the keyboards have an uncanny resemblance. The key travel distance on both of them is 1.7mm and barring the color (Nitro 5 has a red accent), the keyboards on these two machines are very similar.

The key spacing, on the other hand, is pretty good and I really liked that they have not minimized the arrow keys’ size. Small arrow keys? That’s absolutely terrible for gaming.

Anyway, the other thing that I liked about the keyboard is that it has a dedicated command center button in the numpad.

In the command center, you can view your system info which includes details about the CPU, GPU, options to control the fan speed and more. Here, you can also customize the 4-zone lighting of the keyboard to your liking. The lighting is not as vivid as one would expect, but nevertheless, it contributes to the laptop’s gaming aesthetics to a certain degree.

Moreover, the command center acts as a gateway for the Waves MaxxAudio control panel. There, you can customize MaxxBass, width and more as per your preference.

The sound quality is decent but something that did not quite wow me. Even at max volume, the audio did not distort much, so that’s great! Moving on, there’s a “Turbo” key up top using which you can overclock the GPU, up the fan speeds and also max out the CPU limits, should the necessity arise.

However, be very wary of the situation where you decide to use that button cause the improved performance comes at a cost of very high noise from the fans.

Sticking to the fans, they have decided to go with the 4th-gen Aero Blade 3D technology for cooling. The 2 versions of the Aero Blade fans inside are able to keep the laptop considerably cool despite playing games for hours and hours.

The air intake vents are on the bottom and there are 4 exhausts in total. Two on the sides and two on the rear.

If the keyboard of the Acer Predator Helios 300 2019 had an uncanny resemblance to that of the Nitro 5, then the trackpads are the polar opposite.

Although it’s plastic, it works well. It utilizes Windows Precision and tracking. As a result, it offers better gestures and tracking features. However, the trackpad and the surrounding deck is prone to smudges. Thus, you may feel the need to keep having a swipe at it every now and then. 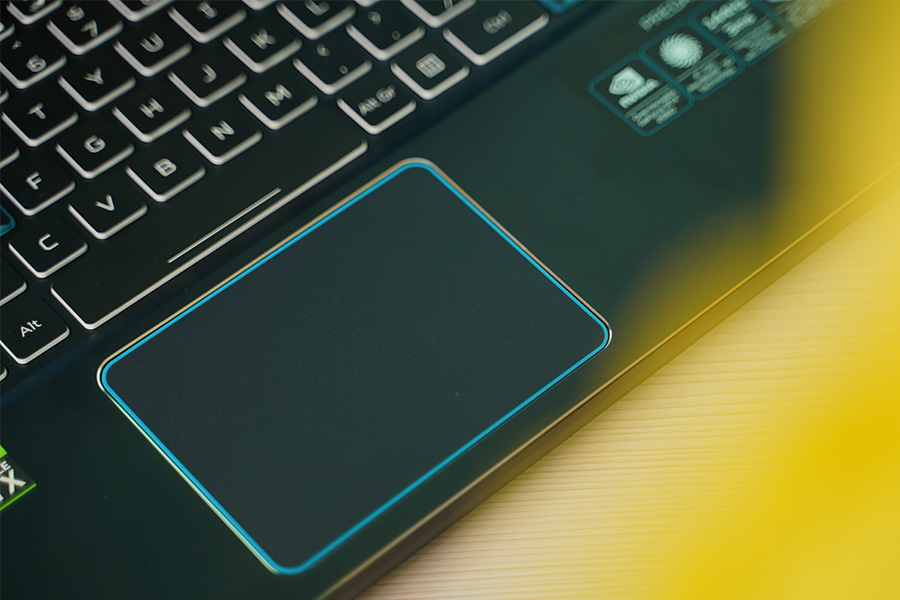 Talking about the ports, on the left-hand side you’ll find a Kensington lock, a power connector, 1x RJ45 port, 2 x USB 3.1 Gen 2 and a headphone/microphone jack. Then on the right-hand side, you get a full-sized HDMI port, a mini display port, 1 USB 3.1 gen 2 port and a Type C USB 3.1 Gen 2 port which does not support Thunderbolt 3.

I feel that they could have squeezed it in there, but I guess they make it up in terms of display and performance.

To be honest, I really enjoyed the display on this. It is colorful, vivid, and perfect for media consumption. And if you are into content creation, the color accuracy is also very good with 97% sRGB and 72% NTSC Color Gamut. The brightness tops up at around 315nits, which is not bright enough to be used in a well-lit environment with ease. 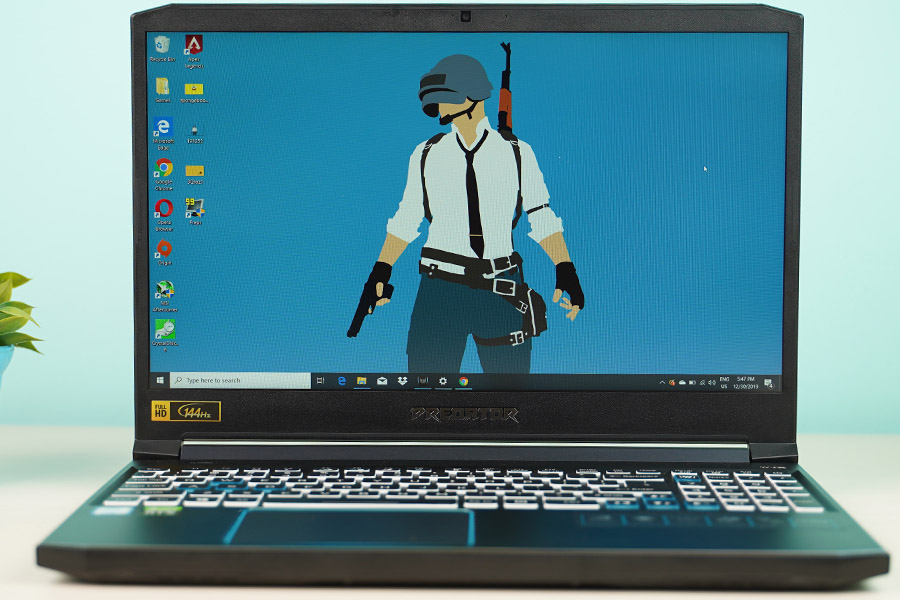 Another minor complaint in this department would be that of the backlight bleeding. Now that may be a concern for some but the instance where you can actually see it is incredibly rare. Thus, as I previously put it, this is a minor complaint only.

Next up, is what most of you are probably waiting for, the performance! As mentioned previously, the version I have with me has the Intel Core i7-9750H processor, 16GB single-channel RAM, and the RTX 2060 GPU. There’s also a configuration available with GTX 1660Ti.

The RTX 2060 and GTX 1660Ti are more or less similar in terms of performance. The former will generally yield 5 to 10% better performance in most of the games.  However, since the GTX 1660Ti is void of Ray Tracing cores and Tensor core, so you cannot enjoy hardware-based real-time ray tracing and DLSS in select games.

To be honest, as of now, there are very few games to have those features, but in 2020, lots of games are going to have it. Therefore, the RTX 2060 guarantees a better future-proofing. However, if you want strict fps per dollar spent, the GTX 1660 Ti ends up being a slightly better value right now.

Anyways, let’s talk about the gaming performance of the Helios 300. Disclaimer, in order to test the full potential of the laptop, I played all my games with the turbo mode on. And having a dedicated turbo key for that purpose is really great. 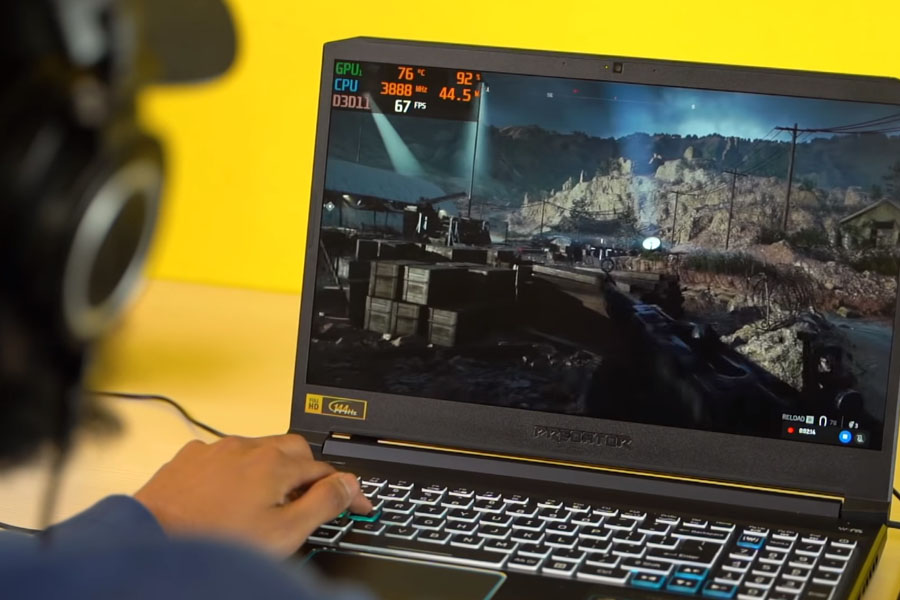 Anyway, coming back to the topic, I played Battlefield 5 in Ultra settings and it gave a solid 90fps on average. Though as I mentioned before, the fan sound is too loud, so you’d probably want to use headphones while playing.

After that, I decided to make the most out of the graphics card by enabling DX12 and DXR. These features help enable “Ray tracing” that in turn improves the quality of reflections on the games.

I have to admit that the load time for the game had significantly increased after enabling DX12 and DXR, however the average frame rate was commendable at around 70. Not a significant drop I must say. So, improved visual experience for almost similar frame rates seems like a good tradeoff for that waiting time.

Next on, I tried my hands in Apex Legends. Same conditions apply here too, max settings with turbo mode on. On average, I got around 120fps which is even higher than my desktop with GTX 1070.

If you tune in the settings, you should get over 150fps. Now, these are the sort of games where you make the full use of a 144Hz screen, the frame rates you ask.

If it’s still not clear, let me explicitly state it, this device can breeze through triple-A titles with ease.

In terms of storage, you get 2 slots for NVMe drives on the Acer Predator Helios 300 2019. The first one is already occupied by the 256GB NVMe SSD that comes with the laptop.

You can check out the read and write speed over here, which is considerably fast.

Moreover, my unit came with 1 TB of HDD as well, so you can pack in as many games as you want.

The battery is somewhat okayish on this one, which is a 4-cell Li-ion 58Wh battery. Now if you plan on using it just for web browsing and sorts, then you can probably get around 5 to 5 and a half hours of battery life. While gaming in medium settings, I only got close to 1 hour of battery life. 1hour – not great, not terrible.

Overall, the Acer Predator Helio 300 2019 offers a great set up at a relatively cheap price (for gaming laptops that is). The design is premium and the performance of the device in regards to the display and speed matches the quality of design.

There might be some minor issues regarding battery life, but they are nothing but minor concerns that you can probably ignore. At a price of Rs. 190,000 here in Nepal, this laptop offers something quite similar to much higher priced gaming laptops.

So, if you’re looking to upgrade from your current “budget” setup to something better without breaking your bank, then I would definitely suggest this laptop for you.