Hello everyone, today I have the Acer Swift 3 with me and it’s one of the cheapest thin and light ultra-book you can buy in the market right now. Actually, there are 2 variants of the Swift 3, one with AMD’s Ryzen 4000-series and the other with Intel’s 10th-gen Ice Lake processors. I’ve got the Intel variant with me that I’ve been using for quite a while now. So, let’s get on with the Acer Swift 3 review.

The first thing I immediately liked about this laptop is how thin and light it is. Here you don’t get the ultra-premium materials like on the MacBook Air or Dell’s XPS series, and it feels a little plasticky too. Although it’s indeed made using magnesium alloy material which helps to bring down the net weight to just 1.18kgs. Similarly, in my months of use, I’m yet to notice any scratches, dents, or dis-coloration so far, which is great. The lid also doesn’t flex as much and this wide hinge helps keep the whole device sturdier. You can also rotate the hinge to 180-degree, though its use case is pretty limited – at least for me. Right inside the hinge, there are 2 exhaust vents, but only the one on the left actually works. Sadly, the one of the right is just there to make the device look more symmetric and therefore aesthetically pleasing.

Getting to the back of the device, you will see air intake vents and 2 speakers right below it.  These speakers’ audio output is quite low and it might not be sufficient while watching movies and such with friends.

Moving on, there are 12 screws holding the chassis in place, and getting inside the Swift 3 is pretty swift. You can upgrade the SSD and WiFi card, but the RAM has been soldered in.

And I have also seen some configurations of Swift 3 with a mere 4GB of RAM, so try avoiding that variant altogether. BTW, the one I have with me has 8GB of RAM and 256GB of storage. The WiFi card is the latest Intel AX201 WiFi 6 module, and I had no issue with the WiFi connectivity. You can also use this Type C port for charging, provided you have a 65W or higher USB Power Delivery charger. You might be wondering if you can charge with the 65W charger you find these days in Realme and Oppo phones but sadly, you can’t.

Anyways, looking at the right side, you will find a headphone jack, another USB 2.0 Type-A port, and LED indicators. 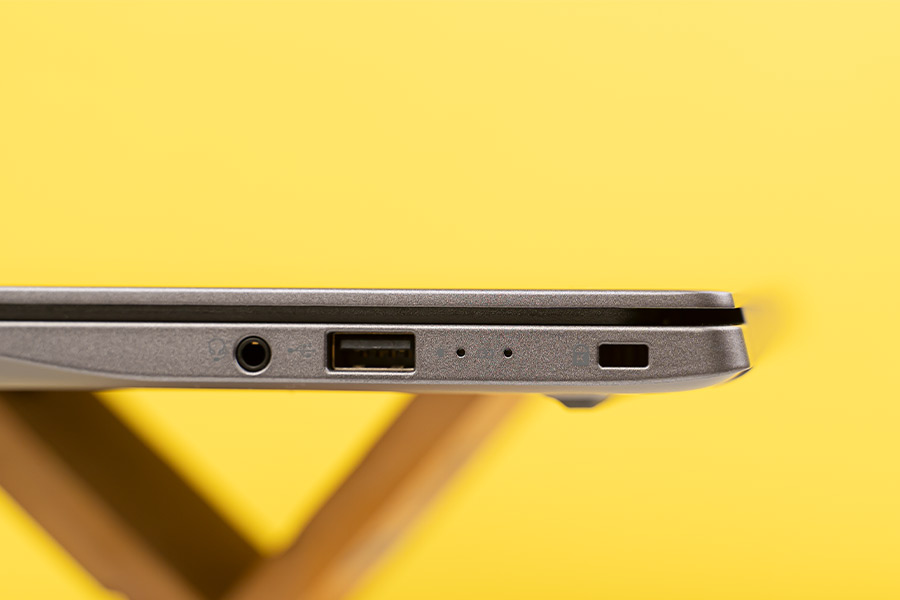 As for the display, you get a 14-inch FullHD 16:9 IPS panel. As you can see, the bezels are thin on the sides and top but at the bottom, it’s pretty thick. You can also get a 13.5-inch variant with a trendier 3:2 aspect ratio, but it’s not available yet in south Asia. 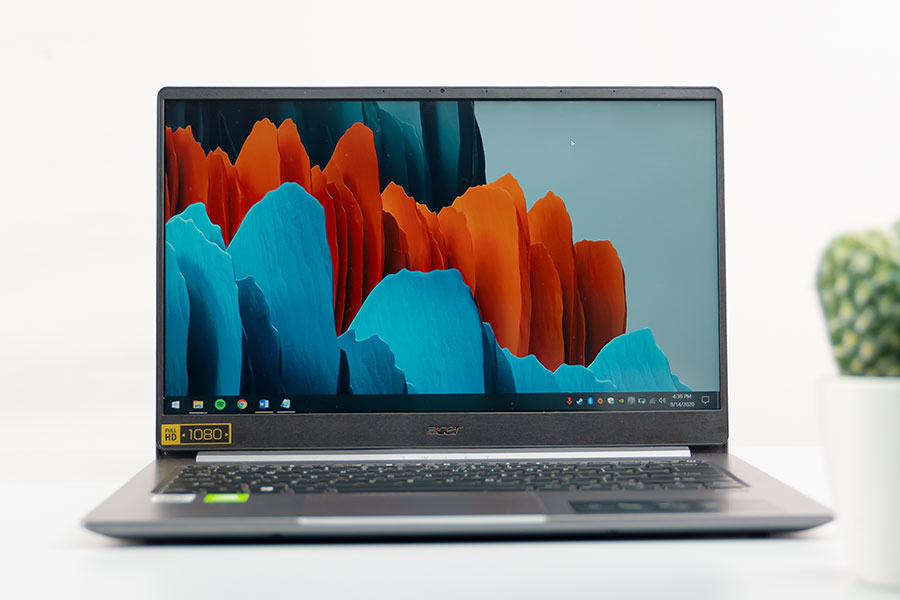 Getting into the display quality of this variant, it’s quite good. Obviously, the color coverage isn’t wide enough for professional creators, but for general usage like web browsing and watching movies, it is completely fine. This an IPS panel, so the viewing angles are great too. Brightness wise, it might not be enough for a fairly well-lit room, or outdoors, but is adequate enough for indoor use.

The top bezel houses an HD webcam and it’s not total garbage. It gets the job done for Zoom meetings and such. However, the audio from the microphone isn’t great. As a result, you gotta invest in a decent headset to get a better audio output.

Now, let’s talk about the keyboard. It has good key travel and I really enjoyed typing on it.

It gives soft feedback and therefore is not very loud while typing. This chiclet-style keyboard has a single-color LED backlighting, which is pretty basic. You can configure between 2 levels of brightness, but only the topmost level is only any good. The only thing I don’t like about the keyboard is the fact that the Page Up and Page Down keys are right beside the arrow keys. And there have been so many instances where I would accidentally click them. Down below the arrow keys, you will find a fingerprint sensor, which is pretty reliable. On the other hand, its plastic trackpad is pretty average too. It is not as responsive as glass trackpads you get on other premium Ultrabooks.

In terms of performance, my review unit is powered by the quad-core Intel i5 1035G1 CPU and the entry-level NVIDIA MX350 dedicated GPU with 2GB of GDDR6 VRAM. You can also configure the Intel variant with up the i7-1065G7.

Similarly, as I told earlier, you can also go with the AMD Ryzen 5 4700U variant, which has a much better performance & efficiency than its Intel counterpart. But, with the Ryzen chipset, you get an integrated Radeon RX Vega GPU, which isn’t as good as having a dedicated GPU that you get here.

With the MX 350, don’t expect anything spectacular gaming performance though – after all, the Acer Swift 3 is an Ultrabook.

However, with prolonged gaming sessions, its single fan couldn’t keep up, although Acer has optimized this laptop to not produce too much fan noise. So, you will start to notice CPU/GPU throttling, resulting in degraded gaming performance.

To solve this, you can get yourself a decent laptop cooler pad, which will help for smoother gameplay. But again, if you want to play games, even the light ones like FIFA, it’s better you get something like the Acer Nitro 5 or the Dell G3 which retails at a similar price as the Swift 3. 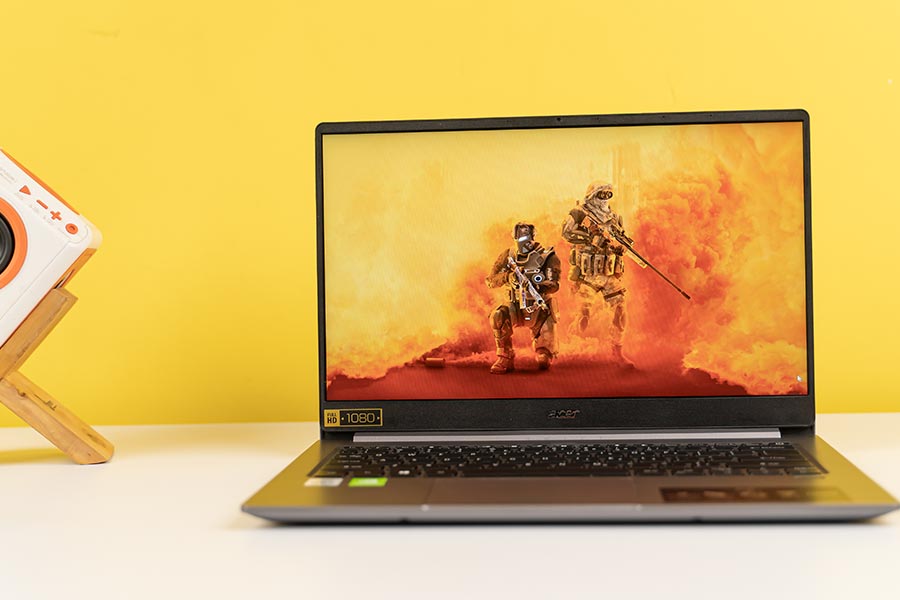 As for my daily regimes like simultaneously using Google Chrome with 10-12 tabs open and Adobe Photoshop for light editing/cropping photos for Instagram feeds, it served me well without any hint of lags or stutter. So, if you fall in this or similar category of users, the Acer Swift 3 should serve you well.

Lastly, let’s talk about battery life. It has a 3-cell 48Wh Li-Ion battery, which I think is a little bit low for an Ultrabook. The endurance is good, but not that great.

Usually, I would not bring the charger with me at the office and all I do is watch YouTube videos and write scripts and it lasted me like 5 hours of SOT under the “Better Performance” setting. So, had Acer provided a slightly bigger battery, the Swift 3 2020 would have been absolutely stellar.

All in all, the Intel variant of the Acer Swift 3 is a respectable Ultrabook for the price. It has got a decent display, the typing experience is also great which matters a lot if you’re someone who types a lot, and the performance is sufficient enough for anyone who’s not into playing demanding games or has an extensive workload like designing, video editing, etc. Having said all this, I still wish Acer had worked on improving in 2 aspects: the speakers and the trackpad – and maybe even the battery as well.