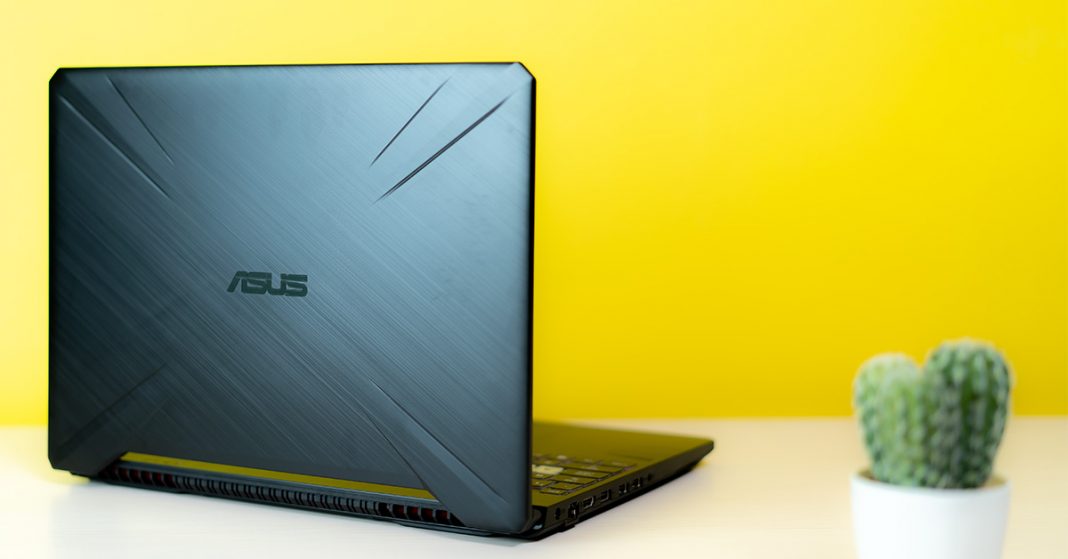 So, when it comes to gaming laptops, you either get an intel-Nvidia combo or a complete AMD setup. However, ASUS is one of the few companies that is actually pushing for something different on that front. With its TUF FX505 series, Asus is offering an attractive combination of a Ryzen processor with the Nvidia graphics. The FX505 series comes in three different variants — the FX505 DD, FX 505 DT, and FX 505 DU. The one that I’ve been using for the past couple of weeks is the ASUS TUF FX505 DD model. Specs-wise, this one falls on the lower end with AMD Ryzen 5 CPU and the GTX 1050 graphics card. If you want more power, you can get the top-of-the-line FX505DU with Ryzen 7 and GTX 1660Ti.

On a different note, we all know AMD has made quite a progress with their Ryzen processor for the desktop, but I actually don’t know how these mobile chipsets from AMD perform. So, like after ages, I was genuinely really excited to test this device. So, without further ado, let’s begin with the review of ASUS TUF FX505 DD.

Starting off with the design, for the most part, the FX505’s design is similar to the last year’s FX504. Just cut the side bezels of the 504 chassis a tad bit and there you have it, the end result is the FX505. On the lid, you can see that converging speed lines are now part of the design with the ASUS logo in the middle. It has an all-plastic built and that certainly gives away that this device is, in fact, a budget laptop. 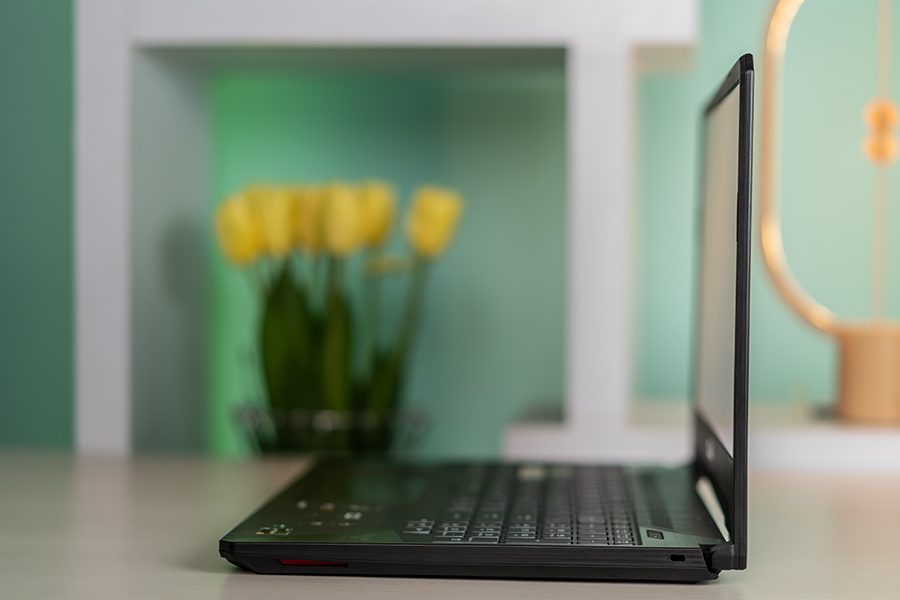 However, despite having a plastic built, the laptop feels sturdy and durable. And why not, the TUF moniker does not come without some durability test. And this one has gone through the military-grade MIL-STD-810G certification. This certification ensures that the device can withstand high altitudes, radiation, and a few knocks. So be assured that the laptop is robust enough for the long run. Now, talking about its relative size, I felt that it falls somewhere in the middle. It is not super slim as the ROG Zephyrus series nor is it bulky like the usual gaming laptops that we are used to seeing. And with a weight of 2.2kg, it would be safe to say that it will not be much of a hassle for you to carry this laptop around every day. You get a sole combo audio jack, a Type-A USB 2.0, two Type-A USB 3.1 (gen1), an RJ45 LAN port, an HDMI port, and a charging port. And all these interface ports are located on the left-hand side. I felt it was a convenient location to place all the ports as you don’t get confused about which sides have what ports. However, on the downside, having all the ports on the same side might lead to a few tangled wires.

Talking about the placement of fans, a major concern for any gamer or for that matter any gaming laptop, the TUF FX505DD has two rear-facing vents. Their performance can be controlled through the function buttons and you can either choose silent, performance or the turbo option. Further down the line on both sides, you get 2W Stereo Speakers aligned at 45 degrees. And its performance as expected with a gaming laptop is okayish. You get decent sound quality with enough clarity; however, you’d certainly want to use a headphone for better experience while gaming.

Now, inside, the 15.6-inch screen offers an immersive display with thin bezels surrounding the screen. ASUS las labeled it as “Nano Edge display”. That’s because the bezels are really really thin-6.5mm to be exact. However, the top bezel is thicker in comparison. And that’s because it houses an HD 720p webcam right at the center.

The other half of the device houses a full-size keyboard with single-zone RGB lighting. However, the WSAD keys do have a special mention here as those keys are transparent, highlighting their importance. With the Aura Sync technology option, you can actually sync compatible games and music with the RGB keyboard. You can access this option via the armory crate and tweak the lighting of the keyboard as per your preference. While pressing the keys you get a satisfying soft tap sound which yields a quick response. Thus, typing with this keyboard really feels great. And talking about the trackpad, it is a smooth one with no physical keys, not my favorite though!

The other thing that I liked with the design is the placement of led indicators for charging, battery and stuff. It is placed above the power button and is visible even with the lid closed. I’m certain that it’ll come handy for many out there.

So, Overall, I felt that even though it is a budget gaming laptop, its design does not disappoint you. Rather, it fits perfectly everywhere. It is not that shiny or extravagant that you’ll feel out of place while taking this to your office. And the inclusion of the stylized keyboard will get you going with your gaming groove. So, design-wise, for the price, it’s a good offering from Asus.

Talking about the display, the FX505DD has a 15.6-inch LED-backlit screen. It has an FHD resolution with 1920 x 1080 pixels and offers a 60Hz refresh rate. And unlike those budget laptops with TN panel, this one has an Anti-glare IPS-level Panel. So, the display is not compromised in this one.

However, having said that, its display is not something that will leave you mesmerized. Nevertheless, its good contrast ratio and above-average brightness will suffice for your daily needs. Maybe it’s a budget factor is what contributes to a mere color space coverage of only 60% of sRGB. Now, most expensive gaming laptops these days have around 90% sRGB coverage. So, don’t expect a very deep and accurate color with this one. Still, this limited color space will not hinder the gaming experience so much.

The other thing that did not sit well with me regarding its display was its outdoor visibility. It turns very dim when used outdoor. Then again it is a gaming laptop and you’ll mostly use it for playing games while plugged in. Viewing angles are great though. And that is what we can always expect from an IPS panel.

Under the hood, the FX 505DD has an AMD Ryzen 5 3550H processor with 8 cores clocked at 2.1GHz. It basically is comparable with intel’s Core i5 8300H and core i7-7700HQ. And despite this AMD processor running at a lower TDP than its intel counterpart, it can still compete with them.

As for the memory, you have 8GB DDR4 RAM. There’s also a vacant slot for expansion. The Gen 3 SSD here offers a fairly decent sequential read and write speed. So, not the quickest out there but still workable.

And for graphics, it offers the NVIDIA GeForce GTX 1050, with 3GB GDDR5 VRAM. So, this combination of the Ryzen 5 CPU and NVIDIA graphics is something that I was actually quite excited to put to test.  But, after using it as my daily driver for almost 2 weeks now, it left me wanting a tad bit more.

Don’t get me wrong, the Ryzen 5 is excellent for your normal usage like surfing the web or watching movies. But that is not why one buys a gaming laptop. People buy it to play games on, and on that front, the end result still gave me a feeling that it could have been a lot better. 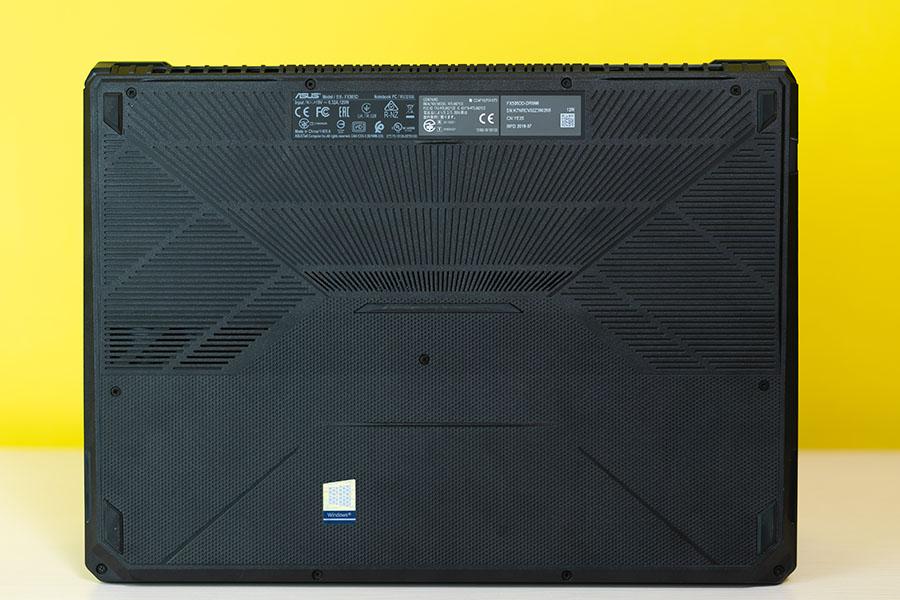 I played Apex legends on this one and the fps that I got was around 32 in high settings. Now, this high setting means that the device is already punching above its weight as it requires 4GB VRAM and this one’s only got 3GB. In a medium setting, the recommended one, you get around 40 fps, which despite not being that grate is still acceptable. For casual gamers or even those who are sort of veterans, I guess this should be enough. And as usual, you can always tweak the visual settings here and there in order to get high frame rates in middle-tier games.

Another game that I tried was Battlefield 5. I know it is a triple-A title and the result was as expected. A laggy-bumpy ride around WWII war zone which is guess is best not to venture out to. The 40 fps on the minimum setting were quite surprising however if you switch to ultra, the fps drastically decreases to around 20-25.

Thus, suffice to say, the FX 505DD is simply not built to push beyond what its price limits it to. All the while I was playing games, I switched my fan to the turbo mode. This mode through appropriate resource allocation helps you boost the performance. But it does come at a huge cost of the loud whirling noise. So, this is something you should certainly look out for.

Now moving on to the battery, this device is powered by a 48Watt hour Polymer Battery. And I have to say the battery life isn’t good. On normal web browsing, I got around 3 hours of battery with brightness set to 50%. And while watching movies it dropped drastically to 1 and half hours. 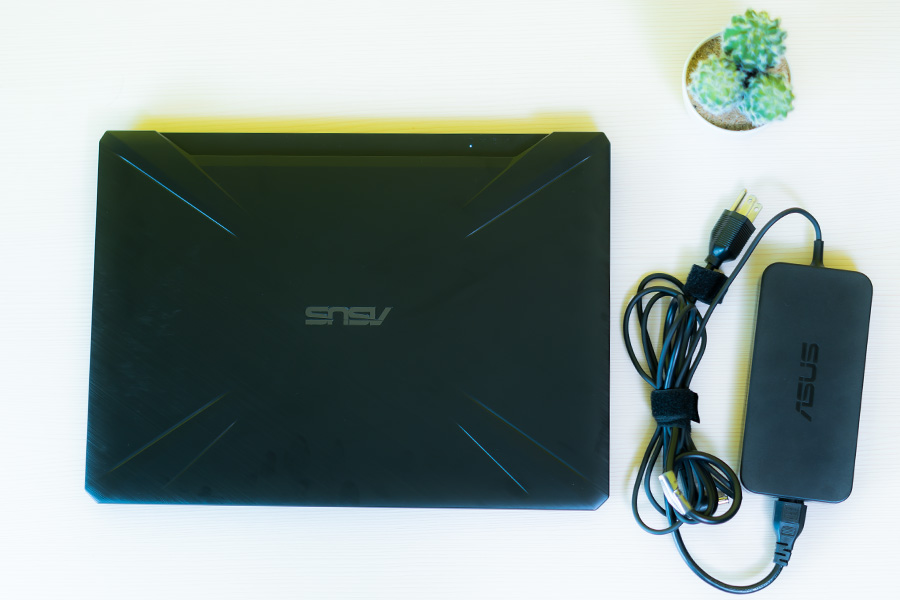 Now, I know that this laptop is meant for gaming and while doing so you’d obviously stay connected with the plug. Still, the average backup that it gave seemed subpar to me. The charging adaptor is slimmer in comparison with those of other gaming laptops. So carrying it alongside the laptop is not a hassle.

So, to buy or not to buy, that is the question. At the price tag of NRs. 95, 000 or around 700 dollars internationally, the FX 505DD is certainly an enticing entry-level gaming laptop. And add to that the unique AMD-NVIDIA combo, this is one laptop I do see myself reaching out for.

I know that its hardware is not built to run Triple-A titles on high settings but then again, I am not one of those hardcore gamers. But from my experience with this laptop, I would recommend it for those looking to move out of their current setting for a gaming laptop at a reasonable price, go for it.