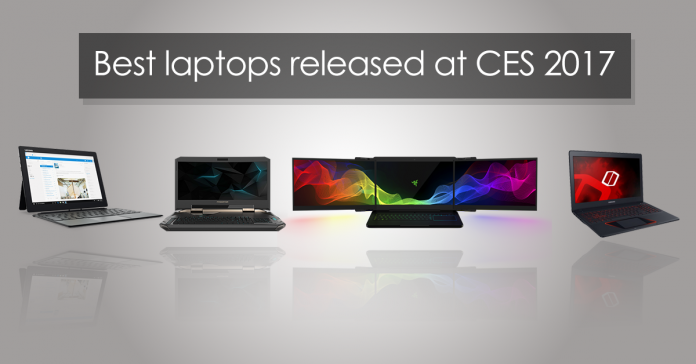 This year, like always, CES got to witness releases of some pretty awesome gadgets and technology. Laptop manufacturers launched many high-end devices at CES. So today, we have made you a list of the best laptops released at CES.

Would you be happier if your laptop featured three displays instead of just a single one? If the answer is in affirmative, then Razor’s Project Valerie might be the perfect device for you. The Valerie consists of a pile of displays that can slide into a three-screen setup. The three displays mean an added thickness and weight, but hey, that’s the device features three huge screens. The Razer Valarie is a VR-ready laptop and weighs at 1.5 kilos. Like its name suggests, the Valerie is still a project and we don’t really know much about its specs. Regarding the price, since Razer’s previous device, the Blade Pro was priced at $3,499, we can expect the Valarie to be priced around $6,000 if it ever gets launched.

Another gaming laptop released at CES was Acer’s Predator 21X which made headlines for its ludicrous price of $9,000 ($8,999 to be precise). The device features a curved 21-inch display (resolution of 2,560×1,080 pixels), the first in any laptop. It is a heavy-duty laptop and weighs a staggering 8.8 kilograms. Safe to say, it is a bit heavy. Talking about its specs, it is equipped with two Nvidia GeForce GTX 1080 GPUs, five system fans, nine heat pipes to stay cool, four speakers and two sub-woofers, Intel’s Kaby Lake processors and a staggering 64GB of system memory.

Dubbed as the world’s lightest laptop, LG’s Gram 14 is a little like its predecessor. It weighs at just 966 grams with the company promising an amazing 23.6 hours of battery life. LG has, however, used a decade-old benchmark test to show that its product runs for that long. The LG Gram 14 features a full metal body which is made of a nano carbon magnesium alloy. It comes with a 13-inch and a 15-inch variant. Both variants feature displays of 1920 x 1080 pixels IPS touchscreens. It is powered by Intel’s newest Kabylake processor.

Like many manufacturers, Lenovo too launched a gaming laptop, the Legion Y720. It is a VR-ready laptop that is powered by Intel’s seventh generation i7-7700HQ processor which is coupled with 6GB of GDDR5 RAM (optional 32GB of DDR4 RAM) and Nvidia GTX 1060. Buyers will have an option of choosing between a 1080p or a 4K variant. It is backed up by a 60Wh battery which the company has claimed will last for five hours. The Lenovo Legion’s pricing starts from $1,399 and will be available this April.

The Asus Pro B9440 sports a 14-inch full HD display. Asus has claimed the device to be the lightest ‘business notebook in its class’. It weighs at just 1.04kg which the company has said is the result of thin bezel around the display and the usage of lightweight magnesium alloy. Under the hood, the Asus Pro B9440 is powered by Intel Core i5 or i7 processor which is supported by 16GB RAM. It also features a fingerprint sensor making your laptop more secure. The Asus Pro B9440 carries a price tag of $999 and will hit the shelves this in May.

Claiming an impressive 16 hours of battery life, Toshiba launched the Portégé X20W, a high-end convertible, at CES. Talking about the specs, the device is powered by a seventh-generation Intel Core i5 processor that is a couple with 8GB of RAM. It can offer the best of both tablet and a PC since it is a convertible. It features two infrared cameras which support Windows Hello facial recognition. The Portégé X20W is accompanied by a TruPen stylus. However, the Toshiba Portégé X20W only features a USB-C with Thunderbolt port and a USB 3.0 connection port which is a real bummer. With pricing starting from $1,199, the device will be available for ordering starting mid-January

The Chromebook 11 N7 might be low on specs, but Acer has built the device to withstand all kind of pressure. Specs wise, the device isn’t a high-end laptop. It is equipped with an Intel Celeron dual-core processor that is clocked at 1.60Ghz along with 4GB of RAM. On the storage front, there are two variants – 16GB and 32GB, which is too less in the present time. It has a battery life of around 15 hours. But what makes Acer Chromebook 11 N7 worth $299.99? Acer has put the device through tons of testing to make the device really tough. It can withstand drops up to 122cm (48 inches) and is U.S. military’s MIL-STD 810G standards certified. It is also equipped with an internal gutter system that can protect the device against liquid spills. Even though the device weighs in at just around 1.35kg, it is quite durable and affordable.

The Lenovo Miix 720 is a 12-inch tablet running on Windows 10. The device comes with a detachable keyboard cover and a kickstand that can adjust the viewing angle around 150 degrees. On the display front, the Miix 720 has a resolution of 2880 x 1920 pixels (QHD+). It is equipped with an IR sensor for Windows Hello. The device is powered by a seventh-generation Intel Core i7 processor with 16GB of RAM and Intel HD Graphics 620. Priced at $999, the laptop comes with Lenovo’s Active Pen 2.

The Dell XPS 13 2-in-1 is a convertible that features a gorgeous looking 13.3-inch IGZO display which comes with the resolution of either Full HD or 3,200×1,800 (QHD+) and is surrounded by a super-thin bezel. It too features a stylus pen which you will have to buy separately. It runs on Intel Core i5 or i7 Y-series (Kabylake) processor which is coupled with 8-16 GB of DDR3 RAM. The laptop comes with an Infrared camera for Windows Hello and a fingerprint sensor. Dell hasn’t however disclosed the price of the XPS 13 2-in-1 yet.

Powered by a seventh-generation Intel Core i7 processor alongside 8GB of DDR4 RAM, the Samsung Notebook 9 combines portability and power in a single device. Both the 13-inch and 15-inch variant feature a resolution of 1920 x 1080 pixels. The Notebook 9 is powered by Intel’s seventh-generation Core i7 chipset and (up to) 16GB of RAM. It is equipped with two USB 3.0 ports and a single USB-C port. The price, however, hasn’t been disclosed yet.

Fifth in the line of X1 Carbon series, the Lenovo Thinkpad X1 Carbon is an upgrade to its predecessor by many means. There is a decrease in the size of the bezel surrounding the 14-inch display. Talking about the display, it has a 1920 x 1080 pixels resolution which can be upgraded to 1440 x 2560 pixels. Lenovo has used carbon fiber mesh for the top lid, thus the name X1 Carbon. The rest, meanwhile, are made of magnesium alloy. Under the hood, an Intel Core i7-7600U chipset runs the show. Also, Intel’s Iris Graphics 640 chip is embedded in the laptop. The device features 16GB of RAM. Even with the ThinkPad X1 Carbon weighing in at just 1.12kg, the device boasts a battery life of up to 15.5 hours. Pricing starts at $1,349.

One of the best gaming laptops released at CES, the Samsung Notebook Odyssey is available in two sizes – 15.6-inch and 17.3-inch. The Notebook Odyssey is plastic built. While Samsung could have done better with the aesthetics and build quality, the device is by no means a compromise. It comes with Intel’s seventh generation Kaby Lake processor, Nvidia GTX 1050 GPU. The 15.6 variant features 32GB of DDR4 RAM whereas the 17.3-inch variant features a whopping 64GB of RAM. Pricing for the base model starts from $1,199.

Featuring Nvidia’s newest GTX 1050 and 1050 Ti cards, Dell’s Inspiron 14 and 15 7000 series are the perfect laptops for someone looking for cheap yet powerful gaming machine. The 14-inch version comes with a 1080p anti-glare LCD display while the 15.6-inch version is available in two display options: 1080p and 4K IPS screen. Under the hood, the 14-inch model and the 15.6-inch model, ship with either a seventh-generation Intel Core i5 or Core i7 quad-core processor. These models can support memory up to 32GB but Dell will be shipping them with 16GB only. The pricing of the Dell Inspiron 14 and 15 7000 starts from $799.

One of the additions to the XPS series, the Dell XPS 15 has already gone on sale for $999. Buyers will have a choice of buying the 15.6-inch device in two options: one with a 1080p InfinityEdge display and another with a UltraShart Ultra HD 4K display. The XPS 15 packs Intel’s seventh-gen Core i3 or i5 or i7 -processor with the clock speed going up to 3GHz, 3.5GHz, and 3.8GHz. The processor is coupled with 8GB of DDR4 RAM which can be upgraded to 16GB or 32GB. In the battery department, buyers will get a choice of choosing between 56Whr or 96Whr batteries.

Dell Gold XPS 13 is the revamped laptop that features Intel’s seventh-gen Core i3 or i5 or i7 processor that is backed by an Intel HD Graphics 620 integrated graphics. Like the XPS 15, the buyers will get a choice between two kinds of displays, a full HD InfinityEdge display or a QHD+ InfinityEdge touch display, both measuring 13.3-inch. 4GB of LPDDR3 RAM is available in the base model. The device is backed by a 60Whr battery.