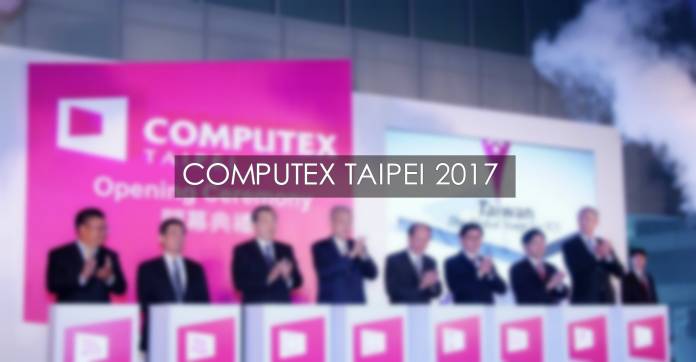 Computex is one of the largest computer and technology trade show in the world that takes place annually in Taiwan. Themed with “From Mobility to Intelligence,” this year’s Computex show lasted for five days starting from 30th of May.  Computex 2017 had apparently dragged a number of renowned tech companies, who presented their inexhaustible zest to evolve the tech world, here are three new products that really got us psyched about.

Most of the gaming laptops have large fans for cooling, obliging a spacious design to fit the bulky skeleton. The fans that sounded like a hurricane while cooling is awfully annoying and traveling with such devices is definitely cumbersome. To cope with such problems, NVidia announced its Max-Q Standard for GTX gaming laptops at Computex 2017. The Standard opened the door for slimmer laptops to inherit a GetForce GTX 1080 GPU, and Asus ROG Zephyrus turned out to be the first one to be privileged.

ROG or ‘Republic of Gamers’ is the ultra-portable gaming laptop with GetForce GTX 1080 GPU weighing a mere weight of 2.2 kg fitting perfectly within a thickness of 16.9mm. For the size and the GPU embedded within, the device is expected to warm up like a fire. However, the Active Aerodynamic System (AAS) in the device keeps all the components cool. In Zephyrus, when the laptop lid is opened, a small bottom panel opens up allowing the fans to breathe in fresh air. With this design language, the interior air ramps ensure cool air to circulate always through the heat sinks. Since the CPU and GPU both have a dedicated blower fan radiator and heat pipe array with the later privileged by the second heat sink, the warmth does not remain adhered to the device and hence evades the burning sensation on the lap while gaming. The arrangement has also restricted the noise level to be 40dB at maximum.

The device also comes with a refreshing surprise with the trackpad – with a press of a button, it transforms from the regular trackpad into an illuminated number pad. The backlit LED in WASD, and QWER buttons on the keyboard can be customized to different colors to differentiate themselves among the other buttons in the keyboard.

Since the release of Core i7 processor, Intel has been somewhat mute in the tech world with no exciting product or feature to surprise the Intel fandom. However, the drought has been lifted up this year. Intel has been back on track with Core X-series of high-end desktop processors. The newly announced processors include even more potent versions of the existing Core i5 and Core i7 models with the addition of a new name to the portfolio – Core i9. In this new lineup of processors, the interested ones will have a choice to select the number of cores ranging from 4 to 18. Since Intel processors employ Hyper-Threading between the cores, the number of threads becomes twofold the number of cores (in most of the processors) making a maximum thread count of 36 and superseding the AMD’s Ryzen Threadripper.

New Core X lineup boasts 10 percent faster multithread performance compared to previous generation chips, offering extreme performance during rigorous gaming sessions. The presence of 36-threads and quad-channel memory has also made the Core X superior in content creation and extreme mega-tasking capabilities. Since the nascent chipsets have received an upgraded Turbo Boost Max Technology from Intel, enthusiasts systems can experience a boost up in the performance. Also, Intel has also mentioned that the Core X systems will dynamically overclock to higher speeds when needed resulting in enhanced performance.

Asus began the Computex event by introducing a new lineup of laptops. Among the bunch, ZenBook Flip S turned out to be the one to steal the limelight and have been the talk of the town till the very end of the show. ZenBook Flip S comes with a mere thickness of 10.9mm making itself the thinnest convertible till the date. Statistically, it is 20% slimmer than MacBook and 55% slimmer than MacBook Air.

The convertible device sports a 13.3-inch display providing an Ultra-realistic Visuals with 4K UHD sensation. The display is protected by Corning Gorilla Glass and is seamlessly embraced by NanoEdge super slim bezels of 6.11mm. The display also senses multi-touch and support Stylus. Flip S employs a durable ErgoLift Hinge to transpose its functionality as a laptop and a tablet. The Hinge also has additional functionality to lift and tilt-out the keyboard when opened past 135-degrees.

A 39Wh 2-cell Lithium-Polymer battery is provided to ZenBook Flip S, which keeps the device nourished. According to Asus, the battery provides 11.5 hours of backup. To avoid lingering of the device with the charger, Flip S is equipped with Quick charging technology, which helps to juice up 60% of its capacity just in 49 minutes. Despite all these astounding features packed within, ZenBook Flip S comes with a trivial weight of 1.1kg.