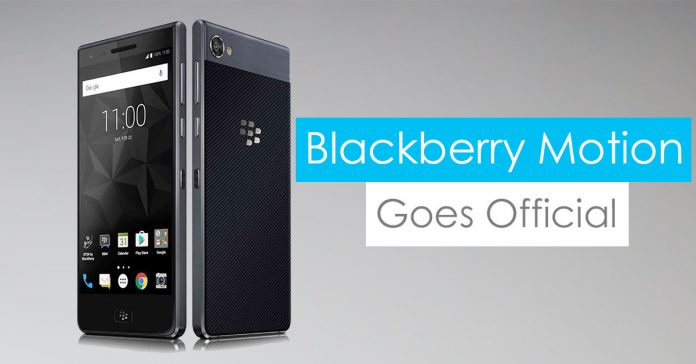 The name Blackberry used to stand for secured and sophisticated. Although that has come to change with its downfall, thanks to Android. And now, Blackberry is once again trying to find some momentum in this saturated market filled with Androids and iPhones.

Also Read: VIVO could launch in Nepal next month The new Blackberry Motion stands at 5.5″ with a 1080p IPS LCD display. The Snapdragon 625 SoC isn’t much of a powerhouse but paired with the 4000mAh battery should deliver good battery life, at least on paper. And 4GB of RAM and 32GB of storage should provide sufficient room for a good user experience.

The camera department is handled by a 12MP f/2.0 sensor on the rear and an 8MP selfie camera on the front. It runs on a relatively new Android 7.1 Nougat with Blackberry’s own goodies on top. USB Type-C is responsible for the battery charging and data transfer with a headphone jack for audio transfers.

The BB Motion shows up with a good sturdy build just like any other Blackberry phone, although we expect nothing less from their phones. The pricing starts at $460 which is a little excessive but it’s just how Blackberry has always priced their smartphones. The phones will initially go for sale in countries like UAE and Saudi Arabia and will gradually make it’s way to some more countries. What do you feel about this newbie? Would you purchase the device if it comes to Nepal? Let us know in the comment section.