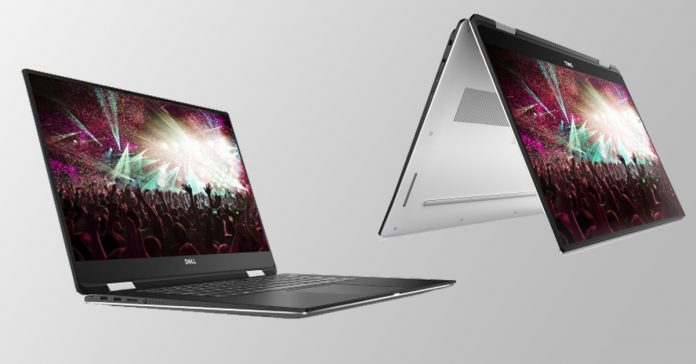 Dell XPS 15 is one of the most popular and certainly the most modern looking laptops around with its minimal bezel-less display. At CES 2018, Dell has launched the 2018 version of XPS 15 which is dubbed as the world’s slimmest and most powerful 15-inch laptop. How and Why we’ll get to that part later, but first let’s check out few of the new upgrades this laptop has received.

The first thing that we shouldn’t  forget to mention, this is the first 2-in-1 convertible in XPS lineup. So if you want to use it as a tablet you can just flip it and do so. This has been possible because of the slim form factor with just 16mm of thickness. As the name suggests, the XPS 15 is a 15.6-inch laptop that you can get in 2 variants, either with a 4K display or a full HD display. No matter the panel of choice you’ll get 100% Adobe RGB color, meaning doing graphic sensitive works and other kinds of stuff you’ll have colors that are as real as it can get. The display like the previous gens is touch enabled.

But to our surprise, Dell has introduced a Stylus pen that goes along with the laptop. The stylus has 4096 levels of pressure sensitivity and tilts to assist in more detailed sketching. It is magnetic so you can stick it to few designated surface of the laptop. It has to be bought separately although the price has not be quoted yet.

The new and somewhat refreshing update that the new XPS 15 has received is its keyboard. It uses a new keyboard mechanism called maglev. The keys are shallow with just 0.7mm travel but the magnets beneath each key tend to provide the feel of more travel by controlling their strength of repulsion. Maglev ensures that there is less friction so the keyboard should be more durable. Talking about buttons, the XPS 15 also receives a fingerprint scanner on its power button. You can also unlock the laptop with your face with the Windows Hello feature.

The Dell XPS 15 2-in-1 has received an upgrade in terms of performance as well. It houses one of the first hybrid chips built jointly by Intel and Advanced Micro Devices (AMD). It has8th Gen Intel Quad CoreTM i7-8705G processor with RadeonTM RX Vega M GL graphics (8MB cache, up to 4.1GHz) on the same chipset. Due to this hybrid nature, the motherboard is now 50% smaller. This has mainly contributed to the laptops thin form factor. Because the processor and graphics unit is together the thermals would be managed better as well. The RadeonTM RX Vega M GL graphics will provide performance comparable to the GTX 1050. Not only can you run power intensive apps but you can easily game on it as well. You can get up to 32GB of RAM and up to 1TB PCIe SSD. Dell promises about 15 hours of backup from this laptop.

Talking about peripherals, it has 4 USB C ports, out of which two are Thunderbolt 3 with full 4 PCIe lanes. It has a headphone jack and a microSD card.