CG mobiles, the first ISO 9001:2008 certified smartphone manufacturer in Nepal, recently launched their budget device,  CG EON Blaze Gold, which is the successor of the last year’s CG EON Blaze. The phone is now relatively cheaper and comes with slightly upgraded specs compared to its predecessor.

CG EON Blaze Gold, as the name suggests comes in a contemporary gold color. Design wise there’s nothing to write home about. It looks like any other budget-oriented phone. EON Blaze Gold sports a 5inch display which is covered by 2.5D glass. We don’t see many budget phones with 2.5D glass, but it’s certainly is a unique touch on a budget device. The display is a 480p panel(854*480) which most of the smartphones carry on this price segment. The phone is powered by 1.3 GHz quad-core processor (unspecified chipset)  with 1GB RAM and the performance should be okay for day-to-day usage. 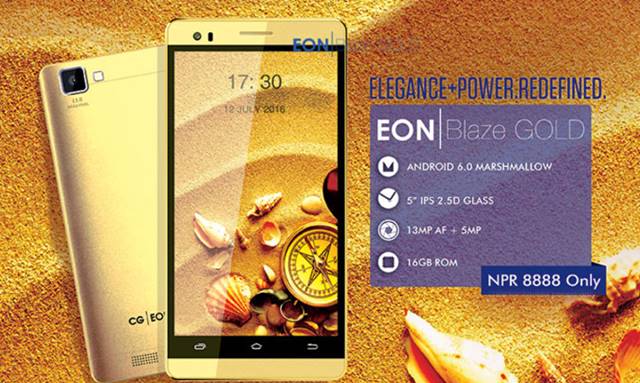 EON Blaze Gold is running on Android 6.0 Marshmallow. It has 16GB internal storage which can be expanded up to 32GB via dedicated Micro SD Card slot. It supports dual micro SIM support (GSM / WCDMA). Talking about the camera it has a 13MP Rear Camera and 5MP Front Facing Camera and both should be pretty decent. Backing up this device is a modest 2,300 mAh battery which can easily  last for a taking the specs into account.