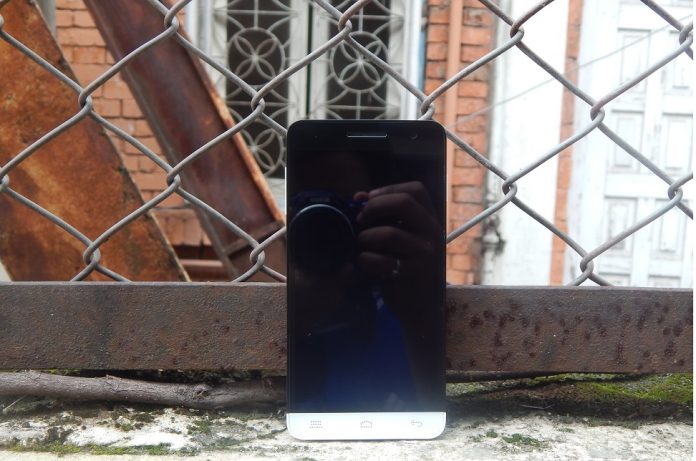 Colors K22 was launched by Colors Mobile as their latest flagship last month here in Nepal. The Price for this Flagship phone Cost Rs.29,500. Lets check on our review if this phone is punching above its weight.

Colors K22 Octa offers a 5 ″(720 x 1280 pixels ~294 ppi pixel density)  IPS LCD display and runs on a 1.7GHz Octa-Core MediaTek  processor with 2 GB of RAM. On-board you get 16GB of storage but you can expand it further with microSD card expandable up to 32 GB.For taking pictures it comes with a 13 MP Sony camera with RWGB lens  and an assisted LED flash at the back and a front facing 5 MP camera for selfies. Juicing up the device is a  rather scrimy 2,200 mAh battery. It currently runs on Android 4.4.2 Kitkat.

This device looks sleek and attractive. With protective Gorilla Glass shields on the front, this phone displays a striking design with black and white colour combination. Standing only 8 mm thick and weighing just below 120 gms, it is easy to carry in your hands.However, you will get upset with its cheap plastic body.They don’t seem durable and could be vulnerable when it slips from your hand. Unlike previous Colors phone-K1 and K2,which had a class unibody design, the Colors K22 back is removable and you have an access to the user replaceable battery alongside SIM slots and memory card slots.

The Colors K22 has a 5 inch Ture HD IPS screen with a resolution of 1,280 pixels by 7,20 pixels, making it a 720p HD screen. Display sharpness can be measured in pixels per inch (PPI), and at 294 pixels-per-inch of screen, it’s sharp,vivid and bright. However, it only supports 5 multi-touch and the touch gets irresponsive. The front is also prone to attract fingerprints easily. But perhaps most importantly, it heats up quickly and can get uncomfortable when calling. The real star of the show is the  operating system – Android 4.4, codenamed ‘Kit Kat’. It’s simpler, brighter and altogether more attractive.There is no 3rd party apps like we usually find in Samsung or HTC phones. The system runs like a dream.

As compared to similar Smartphones in the market, Colors K22 lags a bit on the performance front. This device has a MediaTek MT6592 octa-core processor running at 1.7 GHz. There is no lag while doing simple task but this device can let you face heating issues during heavy gaming.

With 2 GB of RAM, you wont have any memory issues while multitasking. It has 16GB of internal storage with microSD support. You can move apps and games to the internal storage.

Colors K22 sports a 13MP rear camera which in my opinion produces great photos during day light.However, the low light imaging is mediocre. You can can capture photos in different modes like HDR and panorama. You can also record videos at 1080P at 30 frames per second.Overall the performance of the rear camera is good but nothing spectacular. With it’s 5 MP front camera, it produces good quality of photo and things will look clear and has decent amount of details when you take photos or broadcast video from front camera.

Battery is the most disappointing aspect of this phone. With a 2250 mAh battery it has to juice up a true Octa Core phone and a 5 inch HD screen ,so with heavier usage  the battery performance drops fast and the phone needed a charge within 7-8 hours.Though, you  will be able to get 10-12 hours of usage on a single charge when using the phone for web browsing, calls and using apps like Facebook, Twitter and WhatsApp.

Colors K22 performs quite good in terms of sound quality and loudness. It has a single speaker on the bottom edge(Wolfson speaker) but the placement of this speaker is on the back so sound get blocked when you place device on table while watching a video.

It has pretty average call quality, lacking top-end clarity of the best phones. Top volume could also be a little higher. However, calls are still perfectly functional and the phone does have a secondary microphone on its top edge to provide active noise cancellation for calls.

There is no NFC but there is a Hot Knot feature added on this phone .Know more about Hotknot HERE

Unboxing of the Colors K22 Octa

Colors K22 Octa is a good phone but we are not fully convinced with its performance despite having an Octa Core processor and a 2 GB of RAM. It heats of a lot whle playing and could be really annoying if you are a gamer. Moreover, the battery isn’t that great.

You could go for the Grand 2 or Xperia M2 for the same price bracket or you can save some money and buy Huawei Honor 3c which has got a better screen, as much RAM and a long lasting battery life.