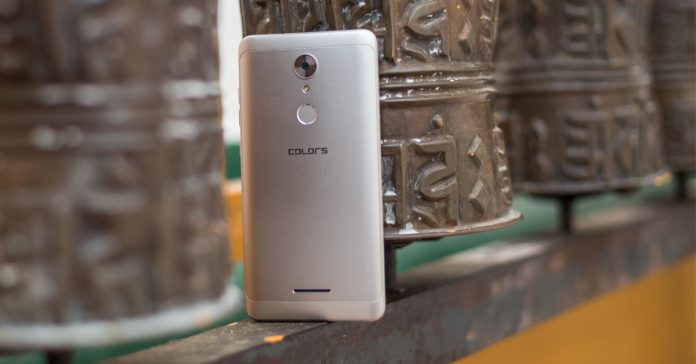 By launching a wide range of mobile phones catering to a varied demographic of customers, Colors Mobiles Nepal has created a mark of itself in the Nepali smartphone market. Continuing their effort to provide excellent products to the customers at the best prices, Colors has launched its latest flagship phone: the Colors P85+ Selfie Pro, priced at Rs. 14,995/-.

I got to use this phone for a couple of days and play around with its features and specifications. I tested out its marketed features during the 7 days and now, I am going to share my experiences with the phone to you. Leaving the judgment at your hands, for now, let’s walk through the highs and lows of the Colors’ flagship phone.

Speaking of the design and build of the phone, it looks almost the same as its predecessor: the Colors P85+. However, the phone includes commendable additional designs as well. Even if the build is actually plastic, the metallic finish on the phone is a wow. Hence, it would nit be wrong to say that the metallic chassis and unibody of the phone offer a premium feel on hold and on use. Also, the phone falls on the lighter scale side and hence offers an easy usability. The P85+ Selfie Pro comes with a 5.5-inch IPS LCD screen, which is an upgrade to its predecessor: Colors P85+ which came with a 5.3-inch display.

The 720 x 1280 pixel resolution offered by the phone is okay. There is not much notable about it. Additionally, there were also some moments where I felt that the display could have been better in terms of color vibrancy and sharpness. Moreover, the 2.5D glass topping adds to the elegance of the phone giving its an extra push. For someone like me, who can be as clumsy as one can be, the Dragontrail Glass protection over the display was an added assurance. The presence of MiraVision engine in the phone is also an additional benefit. With the freedom of choice to select the picture quality based on your requirement, one can easily toggle between the available picture modes and basic color tuning.

All the buttons are placed on the right side of the phone, which I often messed up while use. Though the power button is easily reachable, I had to stretch my finger to reach the volume buttons. The phone features a 3.5mm slot for a headphone jack at the top right and has micro USB 2.0 port at the bottom. The phone comes with a powerful speaker at the back, which performed well. One thing that I noted was the volume during phone calls. It could have been better optimised.

The fingerprint sensor on the phone is just as quick as promised (0.2 seconds). Also, it allows users to store up to 5 fingerprints at maximum. Moreover, there are touch and motion enabled gestures linked with the fingerprints which is something I really enjoyed using. The smart gestures and multi-tap features allowed me to easily to unlock the phone and also launch my immediate priority apps with simple gestures.

The phone runs on Android Nougat 7.0 and delivers an efficient performance. However, there is not much to share about the UI of the phone, it is the same old: Stock Android UI. Though it is very minimalistic and quick, I am not much of a fan of it. So, I am not going to lie to you: I downloaded a launcher app on the phone just as soon as I got the phone.

I also enjoyed the split screen feature of the phone. Because of that, I could easily go through my image gallery and also take notes simultaneously. Also, the app drawer feature allowed me to efficiently switch between two recent apps, saving me from the hassle of app switching.

Also, for security purposes, special features have been designed in the phone like Emergency Rescue and Smart Lock. The Smart Lock feature allows you to keep your phone unlocked by the on body detection mode, through trusted devices, voice and even at trusted places. And the Emergency Rescue feature let’s you choose trusted contacts and send messages to them in case you are in any emergency. This feature was actually something I was impressed with. I didn’t really test to see if it performed just as it had promised, but it is better to be safe than sorry!

Like in all other Android phones with Nougat and higher versions, the phone also includes quick reply feature which performed swiftly saving me the hassle of launching the apps and from the wrath of being the “online but unavailable” person.

The phone features a 2GB RAM and comes with an internal storage of 16GB expandable up to 128GB. The Quad-core 1.3GHz processor teamed with MediaTek MT6735 chipset gives the phone a performance boost. Running multiple apps and switching between them was very easy. The split window feature is also available here, which allowed me to make the most out of available screen space.

There was not much heating issue on the phone even while running multiple apps which was a plus point. Also, with a single touch, I could clear out the apps in use at once which was very helpful for me.

However, there were also certain issues which were a let down for me. Many times, there were pop-up messages stating that the app has crashed and had to be closed. This was quite inefficient as the apps crashed mid-performance.

Speaking of the camera of the smartphone, the phone comes with a 13 MP primary camera and an 8 MP front facing camera. It offers a range of photography modes such as Panorama, Voice Photo, QRCamera, Exposure, Night, HD and Square. The inbuilt camera also allows users to take pictures in Professional mode and play around with features like ISO, WB and ET, manually. The 8 MP selfie camera did not seem to perform as promised. The pictures appeared to capture details finely and pretty close to true colors.  Nonetheless, they did appear a bit grainy. Even if the phone has been promoted as a “Selfie Pro”, I don’t think this performance qualifies it to be called one.

The 13 MP back camera was good enough. I took more than a few pictures this Tihar with this phone and honestly, I was more than impressed most of the time. Viewing Kathmandu through the 13MP rear camera and taking pictures of lights and mandalas was a fun experience.

Both front and back cameras are backed with LED flash that did provide proper lighting for pictures. However, due to the slow shutter speed of the cameras, I had to retake pictures multiple times just to take a steady shot

The Colors P85+ Selfie Pro comes with Bluetooth 4.1, A-GPS, 3G, 4G LTE and OTG support. With Proximity sensor, Ambient Light sensor and Accelerometer. The hybrid SIM slot in the phone allowed me to use a nano-SIM and a micro-SIM simultaneously.

As the phone is 4G enabled, the browsing speed is very seamless. Communicating with friends and family while on the go was very easy.

The proximity sensor in the phone is also commendable as it worked absolutely fine with efficient screen timeout during calls. Also the smart lock in the system keeps the phone unlocked by the “on- body detection” mode when kept close to the body. Also, the phone features an ambient light sensor and A-GPS which helped enhance the performance.

I really appreciate the battery power and back up that the phone provided. The non-removable 3000mAh battery performed seamlessly. Though there was no quick charge functionality in the phone, the battery did provide me a good run time for 4.5 hours after one full charge. Also, there is a “battery saver” mode inbuilt to the system which allows you to choose whether or not you want to save the battery life once you hit the 15% charge mark.

To end with the final verdict of how I found the Colors P85+ Selfie Pro in the short time that I used it for, I must say that for a budget smartphone, this was a good one. The sleek and neat design of the phone and the feel of it itself was amazing. Additionally, the amazing battery backup helped me a lot with my continuous need of listening to music and working.

If you are looking for a budget-smartphone that keeps your wallet happy and fits well in your pocket (Yes, it fits!), this could be a good choice for you. Another quick information: this is the only phone within Rs.15,000 with 5.5-inch display.

However, the phone could probably have delivered much better in terms of the camera functionality. The performance it delivered in this department does not really seem to meet it’s marketed tag of “Selfie Pro”, which is a let down.

Pros: What I liked about the P85+ Selfie Pro

Cons: What could have been better in the P85+ Selfie Pro?

What do you think about the Colors P85+ Selfie Pro? Would you give this a chance? Let us know in the comments below.