Teletalk recently launched their flagship smartphone Colors Pearl Black K3 for Rs.20,995. The phone comes with a stunning design with Asahi enhanced glass on both sides, a whopping 3GB of RAM and 32GB of storage, but how well the phone performs in real world usage?
Disclaimer: We’ve been using the phone for almost one month now, and in this article, we will sum up if the successor of Pearl Black K2 holds to be one of the phones to buy at the aforementioned price.

The design is one area where Colors Pearl Black K3 has hit its mark. Its 5-inch form factor has made the device compact and easier to use also being light at the same time. On my day to day usage, I find this phone conventionally comfortable to use.
Talking about the overview of the phone, On the front, we have the 5inch 720p IPS panel accompanied by ear piece, an 8MP FF camera on top and capacitive backlit button on the bottom. On the back, we have the 13MP Camera with single tone LED flash and colors branding. On the bottom, there is micro USB port along with a single speaker and microphone. The left side holds sim card slot and on the right, there’s the volume and power button with tactile feedback.

The curved sides make the phone really easier to hold with the Asahi glass used on the a back doesn’t make this phone as slippery as I thought. However, it’s a fingerprint magnet if you are using a black variant. Overall it’s a really handy phone.

The Colors Pearl Black K3 comes with a 5-inch 720p display with a resolution of 294ppi and it’s not the best 720p display for this price range. Colors are on the warmer side even with some improvements in its inbuilt Mira vision app. The whites are actually not white here, you get yellowish tint when you compare with other 720p display like the Moto G 2014. For the most part, the display is okay, you don’t see any pixelation and also the outdoor visibility is quite good. But don’t expect anything that crispy from this display. Colors have now adopted the stock version of android which runs on Android 5.1 lollipop which is a really big improvement in terms of performance and usability aspect. But you do get some gesture controls, call blocking and junk cleaning apps inbuilt which is always good to have. You also get 4 themes to choose from, and apart from the default one, other are really funky and doesn’t fit to my liking.

The camera UI is simple and has few options like panorama, face beauty and live photo. The 13MP Rear camera is pretty average for a device at this price point. I really wanted to like the camera but I have mixed feelings about it. At daylight condition, some pictures came out really nice and likable with noticeable dynamic range and saturation while sometimes on the same lighting condition images turn out to be washed out and dark. This happened to me quite a lot so I had to retake a lot of photos to get the right one. And the 1080p video is also not that crisp like you would expect on a full HD resolution but it’s enough to get some normal videos. 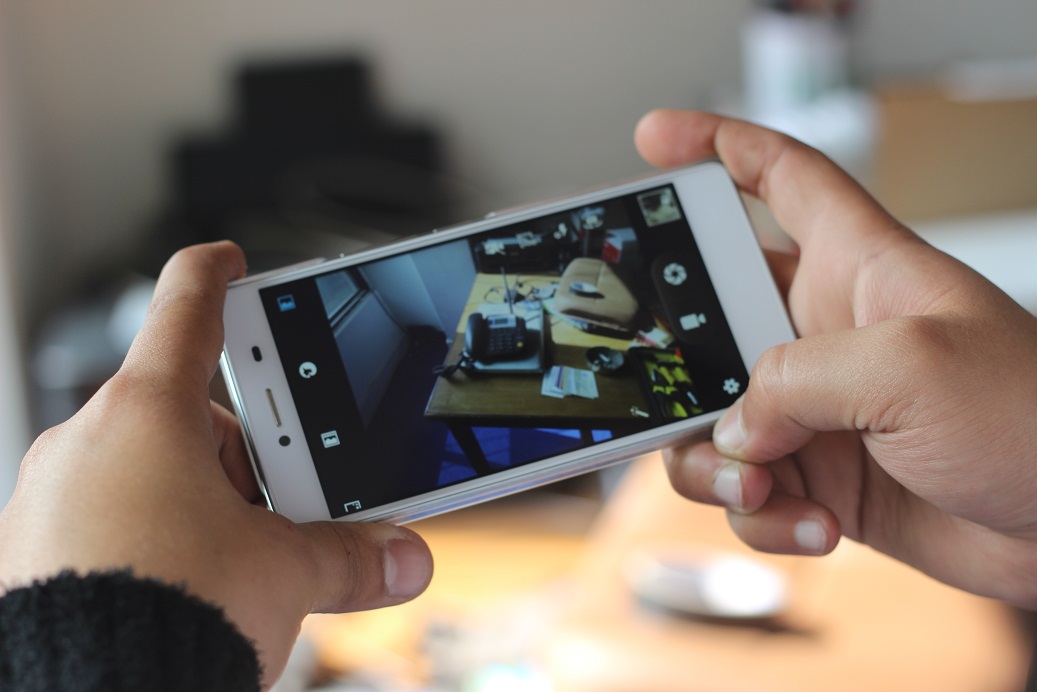 Talking about the Front facing camera, it is quite good for taking selfies and group photos but struggles on low lighting conditions. To be honest, I really don’t expect a good camera from Colors anymore as it’s always the same average performing camera on every phone which you have to struggle with to get a good shot.

Performance is the Colors Pearl Black K3’s forte. This phone is as smooth as it gets. It has the same 1.3ghz Mediatek MT6735 chipset and Mali T720 GPU like on the E20, so there’s not much radical change on the benchmarks, however, the 3GB RAM takes this phone to a whole new level of real life usage.

You get about 1.8 to1.5GB free RAM at any instance and App opening, app switching, playing games and animations work out flawlessly on this phone. Multitasking is no joke here, you can switch between as many apps you want running in the background and they will open right where you left off. (Compare with OnePlus One, app opening and multitasking.) Also, while gaming heat distribution is quite good and you can easily play high-end games without stutters or lag for the most part. Also, the speakers at the bottom won’t give you the best multimedia experience as it easily gets blocked while holding the phone and sound is not that good either.

Its 2350mAh battery is pretty impressive, you can get a full day of battery on normal usage and the standby time is great as well. But on heavy usage you have to grab a charger to juice it up again. And its 1amp power outlet takes about 2 hours to completely charge it from 0 to 100%.

Connectivity bothered me a lot on this phone. My Wi-Fi signal gets lost or disconnected often and I have to reconnect it time and again. Also, while making calls, the call clarity was not that good. I could barely hear the people on other ends. This is mostly because earpiece produces really faint sound. Even with a loudspeaker on, it is difficult to talk on this phone as call clarity is not that good. For my final verdict, the Colors Pearl Black K3 phone has a lot to love and equally a lot to hate as well. It feels good when a phone this cheap performs really well, has no lag, and handles pretty much anything you throw at it. You’ll also love how well this phone is built and how comfortable it is to carry and use, but the price comes into play when you use the godforsaken camera or make calls with this phone. So, for whom is this phone really for?

If you want a cheap phone where you’ll get enough power to play high-end games and get good battery life  and also if you want a light and compact phone with good design you should probably get this phone. Apart from that, I don’t think this is a good buy at this price point, particularly considering the camera performance. There are other great options like the Canvas 5, Lenovo K3 note.