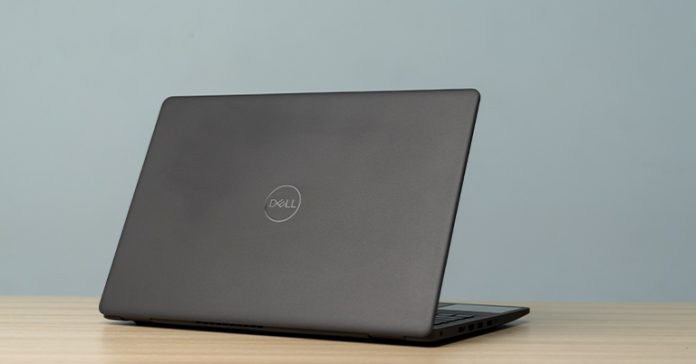 Starting with its design, the Inspiron 3501 has an all-plastic build body which is expected from a budget laptop. It has quite wide bezels on the top and bottom, while the sides get a slender plastic border. Dell is also offering a matte textured design here so that the laptop delivers a firm grip without attracting fingerprints as much. 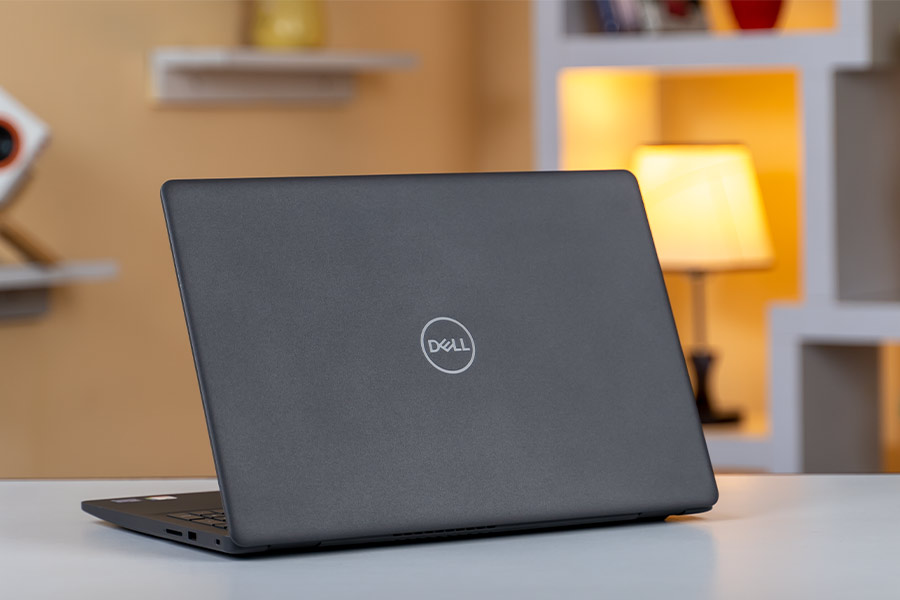 Moving on, with the lid open, it measures 14.33 x 9.80 x 0.78-inches and weighs 1.83 kg. That’s a bit heavy for school-going students although it isn’t that different from similarly priced products. Over on the bottom, it has an air-intake chamber while there’s an Inspiron logo at the center.

Similarly, to prevent the laptop from overheating, the rubber feet at the bottom elevates the device enough from a flat surface to allow better airflow and a more comfortable typing experience.

The display is where the Inspiron 3501 lets down by a bit. It has a 15.6-inch panel with Full HD (1,920 by 1,080 pixels) resolution, which is good, but the screen looks a bit washed out. However, lowering the brightness helps matter a little. The panel doesn’t seem particularly sharp either. Dell’s decision to go for an incredibly inferior panel clearly shows as I could visibly notice the lack in its saturation. 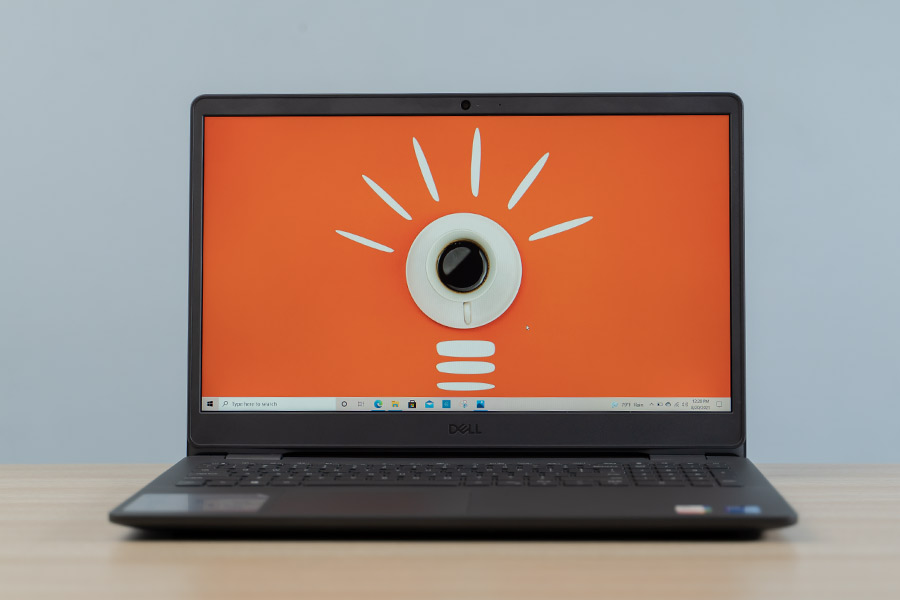 The viewing angles are satisfactory, as the laptop flaunts a Wide Viewing Angle (WVA) panel. As a result, the color tones aren’t that compromised even when looking at the screen from the side.

Moreover, tweaking things a bit with the SypderX Pro color calibrator makes the colors look more pleasing to the eyes. But, I was quite shocked to find out that our unit of the display maxed out at 131.7 nits—while Dell advertises 220 nits of peak brightness. Thus, expecting clear visibility outdoors will be a disappointing journey.

As for the keyboards, it’s a fairly basic one with a dedicated number pad. Like the chassis, the keys are made of rough, rugged-feeling plastic. Dell provides its keyboard with a spill-resistant design, which protects the laptop by delaying the amount of time an accidental spill takes to reach the notebook’s mainboard. So, light splashes or a cup of juice tipping over the laptop shouldn’t be a problem. 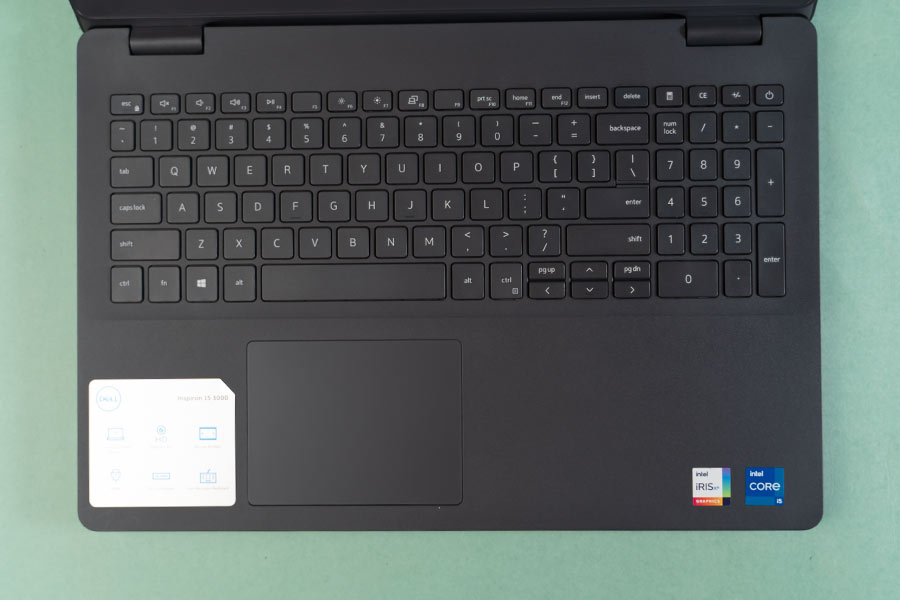 Now, the keys here are actually quite stiff, so they require a firm push. This isn’t a problem when you’re typing for a short duration. But for someone in my line of work who has Google Docs opened for almost 9-10 hours, it’s kind of annoying since my arms start to hurt after a couple of hours.

The plastic touchpad is pretty basic too with integrated left/right keys. However, Dell could have made it a bit smooth for easier operation. Nonetheless, as I prefer a mouse over a touchpad, that doesn’t bother me a lot. Plus, I would highly advise getting a mouse if you’re looking to buy the Dell Inspiron 3501.

Getting to the performance, the device packs Intel’s latest Core i5-1135G7 processor coupled with 8GB LPDDR4X RAM and 256GB internal storage. This CPU has a base frequency of 2.40GHz and a single-core boost clock of 4.20GHz.

Despite being a quad-core processor, this configuration is enough for my daily usages which includes opening 10-12 Chrome tabs, a text editor, Adobe Photoshop, and sometimes Spotify to get stress-free.

If you’re a nerd searching for benchmarks, here it is. Checking the read/write speeds of Inspiron 3501, I found it to be pretty fast for a budget laptop. Likewise, in Cinebench R23, it managed to achieve a multi-core score of 3,637 while the single-core CPU core came out to 1,116. Summing it all up, for a budget laptop, these are admirable scores. Moving on, a long-lasting battery is something of a must for students. And, among all the laptops I’ve tested so far, the Inspiron 3501 ranks among the best in this regard. During my usage, its 42Whr battery provided me up to 7 hours of screen-on time.

To note, my usage pattern didn’t consist of any power-hungry tasks like gaming. Likewise, the laptop charges using a 45Wh adapter which takes three and a half hours to fully juice up the battery.

In terms of I/O connectivity, the Dell Inspiron 3501 comes with a healthy selection of ports. There are three USB Type-A, one 3.5mm audio jack, one charging jack, one LAN, one microSD card, and an HDMI port. I’m sad to see a USB-C port missing here since that’s slowly becoming a norm for many gadgets.

Wrapping up this review, the Dell Inspiron 15 3501 won’t turn any head in terms of design. But all things considered, it’s a decent laptop for the price. It expectedly brings a sub-par display while I feel like Dell shouldn’t have skipped on a Type-C port either.

On the positive end, it has an impressive battery life, suitable for office employees or students. So, I would recommend this laptop for those who want all the essentials to get the job done, but don’t want to break their banks.