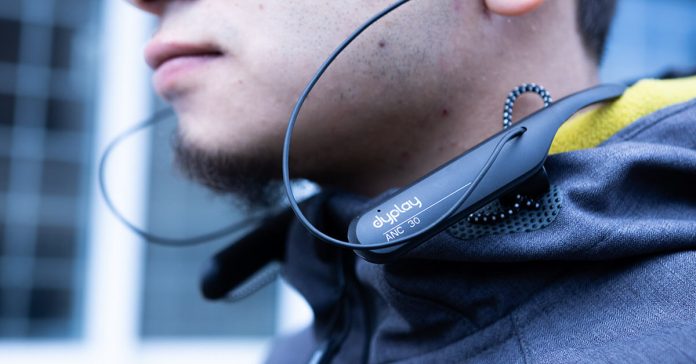 When 2019 was around the corner and while I was setting the New Year resolution to work on my fitness, I got these $56 headphones from Amazon by the courtesy of Dyplay. Since working out with the fitness on is a fun way to maintain fitness, I was really delighted when I got this review unit. Although I wasn’t quite able to give continuity on my daily fitness, I used these headphones for more than a month now. But did I like it? Well, I am gonna answer that in this Dyplay ANC 30 headphones Review.

The Dyplay ANC 30 headphones feature a sturdy neckband with the wires projecting outside the neckband. The wires are long enough so it reaches the ears pretty easily. In terms of aesthetics, the headphones look nothing extraordinary. It looks similar to most of the headphones out there. But if you ask me, I was quite impressed with the earphones’ housing. It looks shiny and is appealing at the same time. Since it is a budget headphone, the materials used on the device is mostly polycarbonate. So, it doesn’t look particularly premium. But it surely is robust. I tried to bend and twist the neckband but the device handled such abuses without any issues. During the review period, I slept with these headphones on in a couple of occasions. And you can easily see the headphone is still intact. So I am quite positive about the durability of the device even in a long run. Also talking about the durability, this headphone also comes with an IPX4 certification, which means that it is splash resistant. So the sweat drops during jogging and the water droplets in the drizzles will not do any harm to the headphones.

The device comes with five dedicated buttons: a power button, an active noise cancellation button, play/pause button, and two volume rockers. With these buttons at its disposal, the headphone is fairly easy to use. Pressing the power button turns the device on with a vibration. When the headphone is on, you can see the Dyplay ANC 30 headphone on your laptop or smartphone in the list of available Bluetooth devices. After that, you can easily pair the headphones with your laptop or smartphone.  Once it’s paired, you are good to listen to any kind of music from your audio device.

While wearing the headphones on the neck, all the buttons lie on the left. Since all the buttons are at the convenient spot, I didn’t have any problem to reach my finger to the buttons. Even while wearing this neckband, I was able to play/pause the music, adjust the audio volume and even accept or reject an incoming call easily.

Continuing with the buttons, the longest one on the button panel is the play and pause button. This button can also be used to answer or reject an incoming call. When you get a call, you can simply press the button once to receive the call. If you wish to reject, pressing and holding the button for a while will do the job. The buttons on the top and button of this button are the volume rockers. The upper one raises the volume and the lower one reduces the volume. Pressing and holding these buttons will also switch to next and previous tracks respectively.

Talking about the sound quality, I was fairly impressed with what the headphones have to offer on the audio front. It outputs a good amount of bass. Mids and highs also sound really clean here. But some music lacks quite a depth though. But considering the price, it was understandable. And what bugged me till the very end was the lack of aptX certification. With the absence of the aptX, I experienced degradation in audio quality at times. I also noticed a slight change in the sound quality when the distance between the audio earphones and the audio device increased. Also, the version of the Bluetooth here is 4.2 and not the latest 5.0. So I quite missed the wider range, faster transfer speed, and power efficiency of the Bluetooth 5.0. But since this is nothing big of an issue, let’s move forward with the performance. When I listened to the songs in these headphones, I fairly liked its touch and its capability to output soothing and smooth audio. I also didn’t notice any sort of latency and distortions in high volumes. And since it is capable of noise cancellation, it is capable of silencing the surrounding noises as well. I turned the NC button quite often while walking on the busy streets. I also used it in the office to avoid background sounds and to concentrate on my works. And on both the scenarios, it did a pretty good job. Surrounding sounds were not that audible and I could enjoy the clean taste of music. But since this headphone is the in-ear type, you will not get a sophisticated noise cancellation like that of the over-ear headphones, where noise cancellation takes place through both active and passive medium.

I found the best part of the device to be its battery. This headphone comes with a sizeable 190mAh battery, which promises 12 hours of backup with the ANC turned off. As promised, the device always delivered over 11 hours of backup on my use. With the ANC turned on, the backup reduces to 8 hours though. So even with the ANC turned on or off, I was able to use it for one working day, which is really remarkable. Charging uses a Micro USB port and takes around 2 hours to get the device fully charged. 2 hours is a pretty long time to charge the headphones. But considering the size of the battery, it looks plausible. When it comes to the battery backup, it even outperformed the MPOW Flame Bluetooth Headphones.

Since it’s a budget headphone, I didn’t have much expectations from the device. But the device gave me a pleasant surprise with its awesome battery life, sturdy build, easy controllability, and decent noise cancellation. Although it lacks quite a punch when compared with the premium headphone, these pair does a remarkable job, especially at its price. So if you are a budget-conscious audiophile, this is one of the best headphones you can get under $60 price bracket.