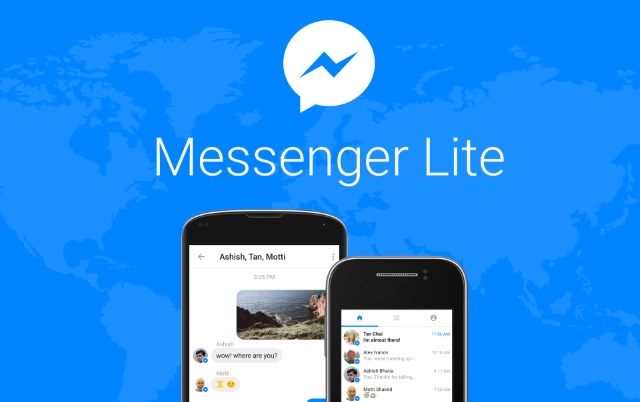 Facebook announced that messenger reached a Billion users mark early this year. This is a great achievement for any platform to have such a huge base of user profiles. Facebook is a global conglomerate and people all over the world use its services, and the messenger is the most used app from Facebook besides WhatsApp. But in the developing countries where internet connection are poor and people only use basic android devices, Facebook Messenger usually becomes unusable. So to tackle this problem and to expand the reach of messengers in every part of the world, Facebook today announced the trimmed down version of Facebook Messenger, the Messenger Lite as its campaign to connect the next Billion!

Messenger Lite is a slimmed version of the Messenger app without any compromises on the facility it provides. The Lite app has both SMS and messaging configuration, stickers, files, and other multimedia support. The app is just under 10MB so it is faster to install and operates more quickly. Not only that it also supports older devices, so my guesses are up to the devices that run Android Kitkat.

We have seen a similar release from Facebook earlier, the Lite version of the Facebook app, which has been successful to connect people with basic android devices. We all know how resource hungry the Facebook app and the Messenger app really is, which drags down the performance of our device. So the solution can be the lighter version of these apps, Facebook Lite and Messenger Lite. Both of these apps will also be useful when you’re not in a Wifi zone or you’re low on your data packs.

Messenger Lite is starting to roll out to people in Kenya, Tunisia, Malaysia, Sri Lanka and Venezuela. We can look out for Messenger Lite in Nepal in the coming weeks.