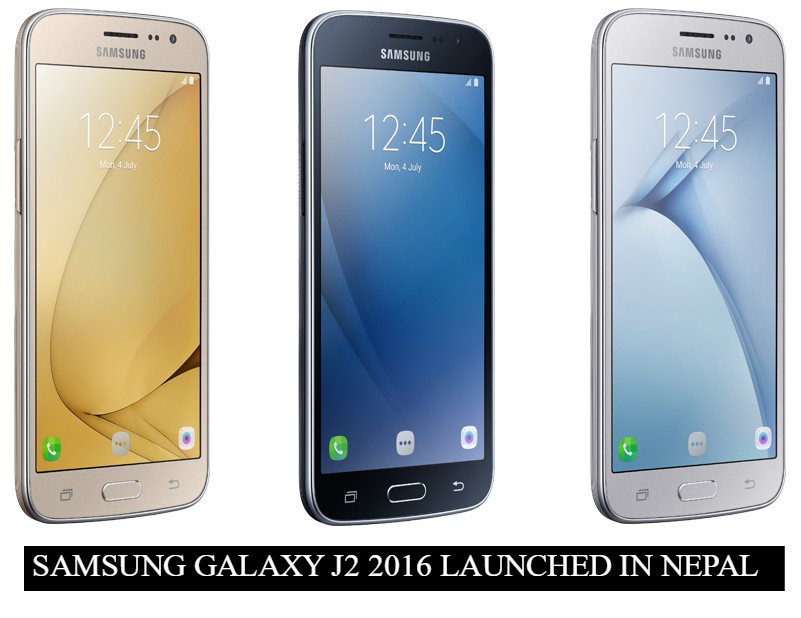 Samsung Electronics Nepal has officially launched the successor of Galaxy J2 2015 with the Galaxy J2 2016 for Rs. 15,990. It is available for purchase from different retail outlets all across the country.

The Galaxy J2 2016 offers improvements over its predecessor in almost every specification. It now features a bigger and better 5-inch HD AMOLED display opposed to 4.7-inch qHD display of J2 2015. It is powered by a 1.5Ghz quadcore Spreadtrum SC8830 chipset with 1.5GB of onboard storage. The internal storage is only 8GB, but one can expand the memory with a dedicated microSD slot upto 128GB.

Both the primary and secondary camera has been bumped from 5MP and 2MP to 8MP and 5MP. The 8MP primary camera comes with f/2.2 aperture lens, autofocus, and LED flash. Powering the Galaxy J2 2016 is a removable Li-Ion 2600 mAh battery and lacks fast charging as it takes about three hours to charge. Connectivity wise, the phone has Dual SIM support like most of the budget oriented handsets from Samsung, but this unit gets the taste of 4G LTE Cat4 150/50 Mbps with VoLTE. The Galaxy J2 2016 model also runs the latest clean TouchWiz UI layered on Android 6.0.1 Marshmallow.

The design is reminiscent of other budget handsets of Samsung which feels cheap and all plastic, but there is one notable difference on the rear side of the J2 2016. Samsung likes to call it as “Smart Glow LED ring” which is basically four LEDs that is concentric to the surfaces of the camera. These LED glows in different colors and serves as a notification system. The rear facing LED’s is the first of its kind as far as phones are concerned, usually, LEDs are located on the front; an area where the user usually see the notification.

Like other entry-level smartphones from Samsung, the Galaxy J2 doesn’t live up to the competition. There are other phones in this price range that provides a superior user experience and better performance.