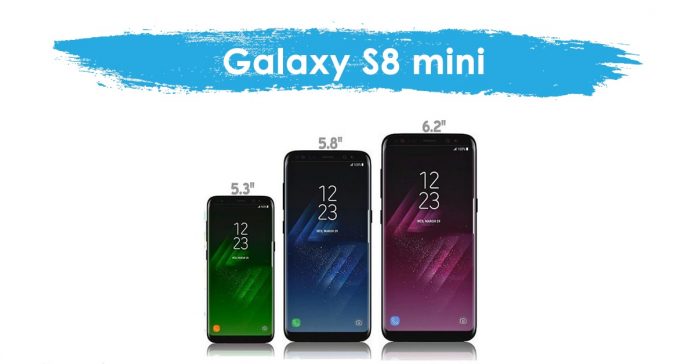 The Galaxy S5 mini was the last phone from Samsung to feature a mini flagship. But now, after three years rumors of a Galaxy S8 mini are surfacing. This is going to be interesting seeing we will get the same infinity display in an even smaller package.

If you remember the mini flagships from before, they never had the best specs as their bigger counterparts. The S3, S4, and S5 mini were just not as capable in the specs department, and they didn’t exactly get the same software update treatment either. But this S8 mini is rumored to have better specs. Not on par with the normal S8 but still better than these minis traditionally had.

According to the rumors, the new device will feature a 5.3″ infinity display on a body as small as the iPhone 7. This is thanks to the edge to edge display on these new Galaxy flagships. Inside could be a Snapdragon 821 SoC with 4GB of RAM and 32GB ROM. This keeps its specs on par with last year’s flagships and some of this year’s flagships as well (LG G6). This will adopt the same 18.5:9 wide screen ratio along with the iris scanner and Samsung’s own Bixby assistant. Although the screen technology and resolution aren’t mentioned in the rumors as well as the battery and the cameras. But going by their recent lineups of smartphones, this one will most probably work with the SuperAMOLED display.

These rumors come from the Asian website ITHOME. The prices and the availability of the phone are still unclear, although South Korea will be the first to get this phone. If a phone like this exists, it will have to compete with smaller phones like the Sony Xperia XZ compact.

What do you think of this rumors? And what price do you think is acceptable for a phone like this? Comment below to let us known.