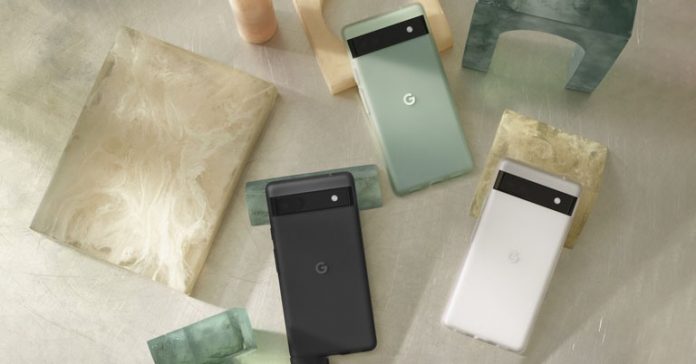 This year’s Google I/O event saw multiple launches, including the much-awaited Pixel 6a. With the new design and tensor chip, the phone is being presented as the cheaper alternative to the Pixel 6 and 6 Pro. It is now available for pre-order in multiple markets including the US, UK, India, and Australia. In this article, we will be discussing the specs, features, expected price, and availability of the Google Pixel 6a in Nepal.

Goole Pixel 6a brings a familiar two-toned design with a horizontal camera back at the back. The frame is metallic, and the fingerprint scanner hides underneath the display as well. There are three colors to choose from here: Chalk, Charcoal, and Sage. Unlike the Pixel 6 and 6 Pro which are IP68 dust and water-resistant, the 6a settles with an IP67 rating instead.

Over on the front, Pixel 6a sports a 6.1-inch OLED screen with FHD resolution. Google doesn’t look keen on joining the higher refresh rate bandwagon for its sub-flagship phones since the Pixel 6a refreshes just 60 times a second. The screen has a center-aligned punch-hole cut out for the selfie camera. In terms of performance, Google Pixel 6a is powered by the same in-house Tensor chip as its bigger siblings. It even has the Titan M2 security chip. The phone is available in a single memory configuration with 6GB LPDDR5 RAM and 128GB UFS 3.1 internal storage.

Pixel 6a will ship with Android 12 out of the box. That being said, Google has already confirmed that it will be among the earliest adopters of Android 13. The company is also promising five years of security updates.

The horizontal camera bump at the back of the phone is home to a dual-camera setup. It consists of a 12.2MP primary camera with support for Optical Image Stabilization (OIS). It looks like Google has used the same hardware here that’s found in the Pixel 5a. The main camera is accompanied by a 12MP ultrawide sensor. Upfront, the circular cut-out is home to an 8MP selfie camera.

Google Pixel 6a comes with a 4410mAh battery — even smaller than its predecessor offered. Still, Google says the phone will last up to 24 hours. There is even an Extreme Battery Save mode, which promises endurance of up to 72 hours. The phone is pre-loaded with features like Live Caption and Live Translate.

Google Pixel 6a Price in Nepal and Availability

The Pixel 6a is now available for pre-order in India via Flipkart where it costs INR 43,999 for the sole 6/128GB variant. The company does not have its official stores in Nepal, but we expect the price of Google Pixel 6a here to be NPR 80,000 if it arrives via unofficial channels.