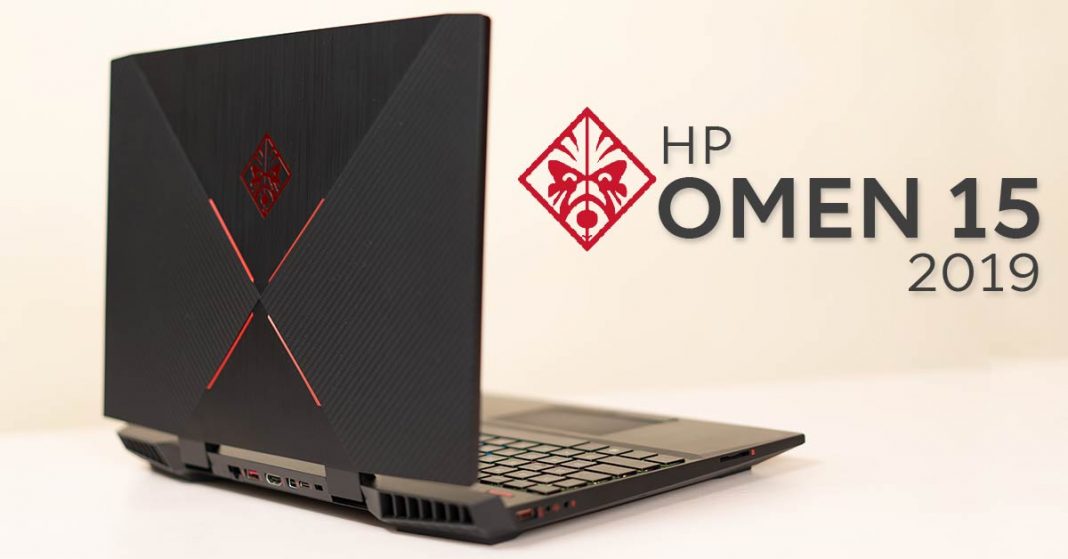 With the carbon-fiber-isque converging pentagons, the HP Omen 15 does stand out among the crowd of gaming laptops. However, this one is much more than just design. Under the hood, it packs the latest i7 9th gen processor, Nvidia’s RTX 2070 max-q design, and much more.

These specs promise a high-end performance capable of satisfying every gamer’s cravings. But does its performance match up to what we see on the paper? So, without any delay let’s jump straight into our review of the HP Omen 15 2019 edition.

The HP Omen 15 2019 does have a decent build quality. It feels sturdier despite most of its parts have a plastic build. Also, it falls on the lighter side, considering the fact that most gaming laptops are beasts when it comes to weight. 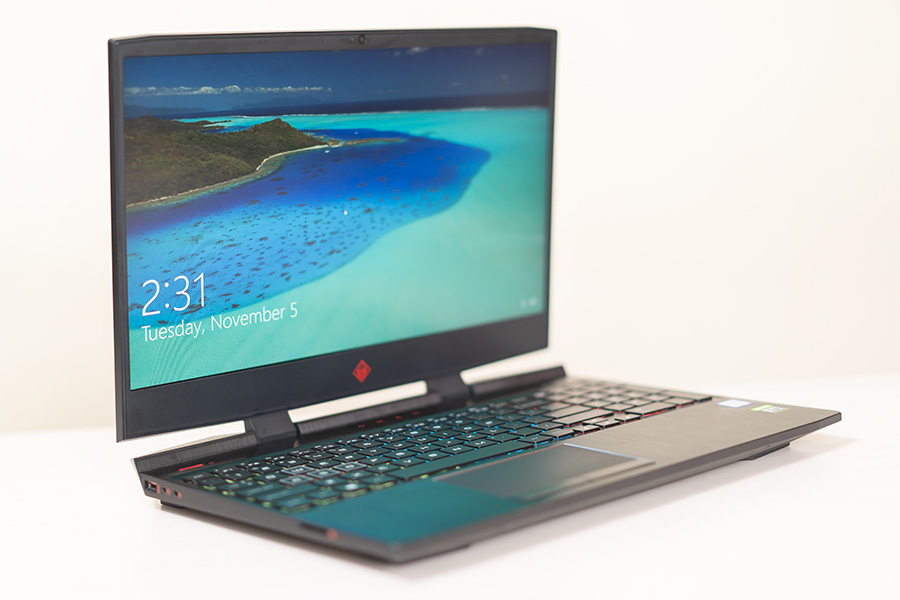 It is still not the thinnest out there as you’ll find the Zephyrus M series we reviewed a while back to be much better in terms of portability.

Talking about the design, nothing much has actually changed from its previous iterations. There’s still the dual-hinge support and the plastic-metal mix combined with the carbon fiber finish.

You’ll find the omen logo on the upper case with its signature red coloring. As a matter of fact, the colored logo is complemented by leading red lines in the pentagonal shapes up top. As there isn’t a major design overhaul, the ports are placed in similar spots as before. On the rear, there are RJ-45 LAN port, a USB 3.1 gen1 Type A, an HDMI port, a mini display port, a USB 3.1 gen1 type C and the Kensington lock slot. Then there is the gen 1 Type-A USB port on either side along with the headphone, microphone, and the SD card reader slot on the left-hand side.

Overall, I felt that the placements of the ports are well thought as you’ll not face the problem of tangled wires.

On the inside there’s sort of a matte finish which looks neat however is very much smudge susceptible. So, if you have are the sort of person who likes to keep their laptop always shiny, then you’ll probably have a very hard time maintaining it in the Hp Omen 15. There’s also a full-sized keyboard with 4 zone RGB lighting accompanied by a trackpad. The 15.6” screen is surrounded by thin bezels with the bottom one being the thickest of them all. Up top, there’s the 720p webcam. It is not something that will woo you but still, it serves its purpose.

The 15.6-inch full HD display with a native 144Hz refresh rate is easily one of HP Omen 15 2019’s main attractions. The Panel is fairly color accurate with 93% SRGB color gamut and 60% Adobe RGB. However, the contrast ratio isn’t that great. So, personally, I wouldn’t recommend this to the graphic designer and video editors. Also, the brightness peaks at around 300 nits, which isn’t great for outdoor.

However, thanks to the IPS panel, the laptop provides stable viewing angles. The color distortion from even acute angles is barely noticeable. Thus, you should not have any difficulty in viewing what’s on your screen from any angle.

As mentioned earlier, the Hp Omen 15 has the Intel Core i7-9750H processor which is backed up by the NVIDIA GeForce RTX 2070 Max-Q graphics.

I have the 16GB Single channel DDR4 RAM and 512GB SSD. It has a Samsung SSD which, trust me, works wonder in terms of speed. If you want better performance, you should definitely add 16GB RAM in its second vacant slot. Now as expected, the 9th gen intel processor and RTX graphics are a powerful combo. The high refresh rate display along with the powerful internals means you’ll experience smooth gameplay while playing any triple-A titles.

I played PUBG and Apex legends in it, and gosh it ran smoothly. For instance, while playing Apex Legends on maximum settings, the average framerate was 110fps. As for PUBG, the ultra-settings resulted in up to 140 fps with the average being somewhere around 120fps.

Well, it was able to handle the likes of PUBG and Apex Legends pretty well. But what’s the use of having an RTX graphics and not utilizing it to the fullest. So I went ahead and played the gruesome game that is Battlefield 5. Now, this game does allow users to either enable or disable the RTX. At first, I played without enabling this feature and the laptop provided a reasonable 90 fps on average.

Then after was the turn for enabling RTX. And as expected the magic happened, in terms of the visuals that is. This feature brings forth ray tracing, which improves the reflection of the surrounding in the game. So, no wonder it proved to be a visual treat. However, the downside is that you’ll get a reduced framerate. On average it gave me 50fps with this feature enabled. Now, that is not bad considering you are getting improved visuals. So, I guess the trade-off is quite reasonable.

So, there are Minimal frame drops and no lags. Basically, this setup is just perfect for playing any modern triple-A titles on maximum settings. That too without any compromises.

Well, if it can easily handle AAA games, then it should face any difficulty in performing everyday tasks. And that’s certainly the case. Even while running multiple tasks, the laptop easily blazed past everything. So no complaints whatsoever in terms of its performance.

So, is it the perfect gaming laptop? Well, everything has a catch and what is it in this case you ask? For that, I would have to say the minor heating issue that exists. After just around half an hour of gaming, I felt the palm-rest, as well as the front section of the laptop, started to heat. It’s certainly not uncommon for laptops to heat while playing high-end games, still, I didn’t find the thermal performance of this device to be best out there.

Add to that, the decent but not up to the notch Bang & Olufsen speakers. Though they provide a decent sound you might just want to use headphones while gaming in order to feet that extra punch in the sound.

HP Omen 15 also features a full-sized keyboard that has 4-zone RGB lighting. The keys are of perfect size and it is comfortable to type on. Thankfully the keyboard includes a numpad too. Now, as far as the backlighting of the keyboard is concerned, it can be easily controlled with the HP Omen Command Center.

The command center can be used for a detail adjustment of the backlight, however, for a simple toggle of the light, you can use the function keys. However, you do not get any option to adjust the brightness of the backlight.

Furthermore, the preloaded Omen Command Center also helps users to optimize and monitor. For performance optimization, you can choose either comfort, default and performance mode. There’s also an added network booster option which you can adjust to reduce latency while playing online games.

The other aspect that I found disappointing in this device is its battery life. The HP Omen has a 6-cell 70Wh lithium-Ion battery. And it comes with a 200W AC power adapter. Now, the charger on this one is not as heavy as you would find on other gaming laptops but compromising on the charger weight is not an excuse for a meh-sort of battery life.

HP Omen 15 with its stand out looks and accomplished performance is certainly a great gaming laptop. Now, for the asking price of NRs. 240, 000 might just be a little too much for many out there. However, the specs that this device packs more than justifies its price tag.

I honestly enjoyed using this laptop and if I had to niggle into some minor things that might make give me not want to recommend this laptop would be its battery life and the heating issue.

The standby battery life should have been at least 2 and a half hours. But then again it is a gaming laptop and you would probably use it most often whilst it is plugged in.

Then there’s the thermal issue as mentioned above. So, you probably will have to use an external cooler if you’re planning on playing games all night.

Other than that, the HP Omen 15 is undoubtedly a powerful gaming laptop. And I would certainly recommend this laptop for those users who want to upgrade from their entry-level laptops or even some of the seasoned gamers out there.