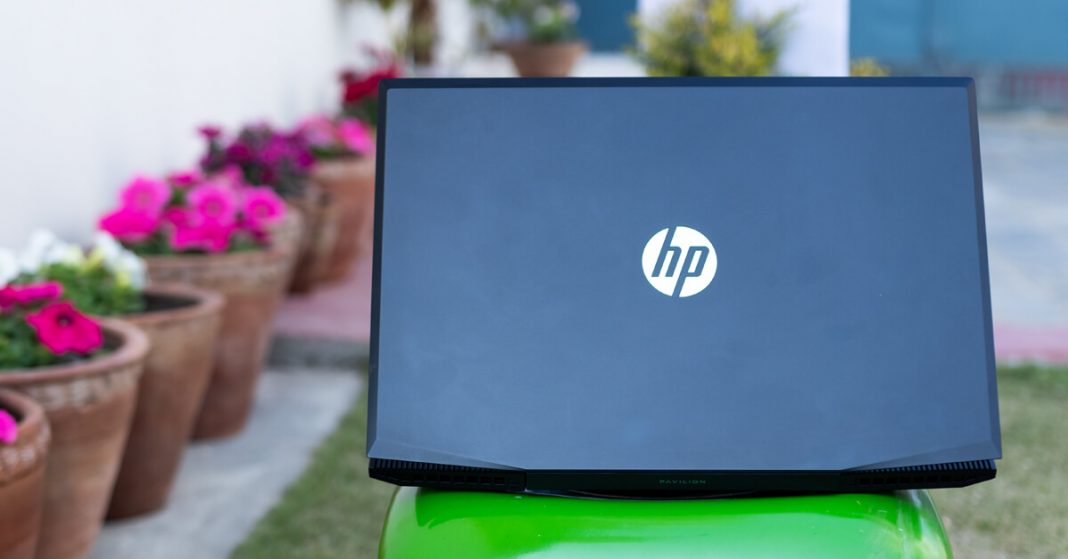 With the new RTX gaming laptops launching every week or so, the prices of GTX 10 series laptops are getting some decent price cut and today I have with me is the HP Pavilion Power 15 laptop that’s available for an insane deal at $650 or Rs. 95,000 here in Nepal. So, is this the best budget gaming laptop right now? We are going to answer that in this HP Pavilion 15 Power Review!

So, starting off with how it looks, it is somewhere between a typical gaming laptop, and a regular notebook. It’s not your typical rectangular laptop. Just because it doesn’t cost as much as high-end gaming laptops don’t mean it can’t look like one. With sharp edges and uneven looking exhaust grills, it gives a bit of an OMEN vibe here, but of course, it doesn’t go all out. It doesn’t scream gaming, just subtly says so. After all, there has to some difference between affordable and more expensive models.

In terms of looks, there is this green accent going around all over. From the keyboard backlighting to the HP logo on top, everything is green. Maybe they’re taking the “Go Green” thing too seriously.

But the green accent looks pretty good on the laptop. It is a welcome refreshing touch from the invasive red color or the RGB lighting, although it might look cool. There aren’t many laptops that look like these. The Dell G7 with its blue accent looked great as well. And this one has this “Matrix” vibe going on for it. The build quality looks pretty solid. There is a minimal amount of flex on the lid and on the keyboard deck when pressed. It seems it can take a fair amount of abuse even though most of it is plastic. But due to that very reason, it is pretty light for a gaming laptop. At 2.2 kilograms, this is not your lightest gaming laptop, but for a 15” gaming laptop, there are only a few of these. The hinge, on it, seems tight and you can’t open it with a single hand. But that’s not something that many will be bothered by.

Overall, this is a machine that does not scream gaming, but only subtly says so. As much as you can game on it, you can also take this to work.

As for the ports and connectivity, this laptop has a great choice of those. A Bluetooth 4.2 may not be one among them, but it’s hard to expect anything better on a budget gaming laptop. But it does have a stable 2 x 2 ac Wi-Fi, though.

Also, it gets enough ports. Three USB-As, a USB-C which does not have Thunderbolt 3 support, an Ethernet port, an HDMI port, an SD card slot, and a headphone jack make for a good selection of ports.

The keyboard seems fine. It’s not perfect, but better than you can expect on a budget gaming laptop. Keys are clicky and provide good tactile feedback. They are also well-spaced and with 1.5 mm key travel, typing on it is pretty comfortable. The only problem is the uncomfortably squeezed arrow keys, which is a bit annoying while navigating. 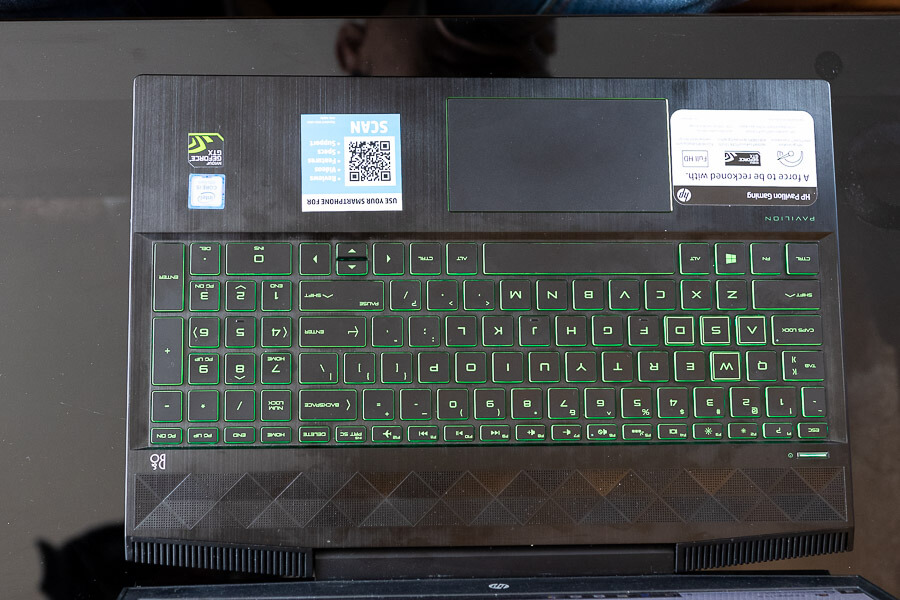 Overall, the keyboard is good. Of course, there are a lot better keyboards out there, but most users should have a good time with it. The same can’t be said for the trackpad. The trackpad is wide, but not long enough. Tracking is also not as smooth as I’d like. And with ELAN drivers, gestures are not as accurate either. I wish they’d included Windows Precision Drivers, but they haven’t. This makes the trackpad usable, but you’d want to get a mouse, even for non-gaming purposes.

The display on it is as good as it gets, for a budget gaming laptop. It’s a Full-HD IPS panel, and the viewing angles are pretty good. The resolution goes fairly well for games, as well as movies. The color accuracy takes a hit with around 60% of the sRGB and 40% of Adobe RGB covered. So, not something you’d want to use for content creation.

If you put it side by side with another laptop with a better display, you get an actual difference in colors for the same photo, or video. Along with the contrast, the display is good enough for gaming, and that’s all. 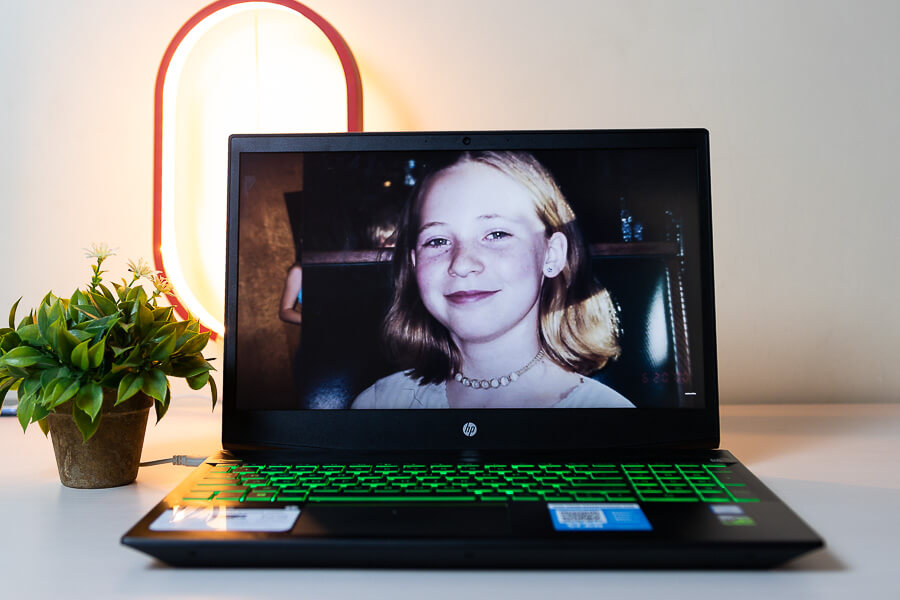 Brightness maxes out at 250 nits. That makes it okay for indoors, that too, under proper lighting. It’s not something you can use under harsh lighting conditions or outdoors. Dark scenes in movies can be difficult to make out too, which you might have to get used to.

What makes this display great, though, is the slim bezels around the side. This is not XPS level thin, but it is thin enough to make it even more appealing. This also makes the laptop looks like a premium device, even though it’s not.

Combined with an 8 GB of RAM, this is good enough for all kinds of tasks. It can handle any kind of usage for day to day work. If you have over 20 tabs in Google Chrome, and still want to do a bit of Photoshop or such, you can. You can even game with all that open in the background. So, performance is not an issue.

As for gaming, you get two variants on this laptop – one with GTX 1050 and another with a 1050 Ti. And as any sane person would, I suggest you pay the extra premium and get the Ti version, as it is slightly better than the regular one.

Our unit was also the same, and the performance was as expected from other laptops with the same Graphics. It can run most games at Full HD with settings at medium. Even so, many games cannot reach 60 frames per second. For that, you’d have to turn them down to low.

Of course, games like DOTA and CS:GO can give you quite the frames, but for games like PUBG, Battlefield, and Fortnite, I’d recommend you go no higher than medium.

The thermals on it are good. It’s not exactly a very powerful CPU and GPU combination, so, thermals are not really a concern with this laptop. But you can expect smooth gameplay without thermal throttling even after 2 hours of continuous gaming. The fans can act even if you’re doing nothing intensive, but they’re not really loud.

The laptop, by default, comes with a 1 TB Hard drive at 7400 rpm. And as hard drives go, they tend to be sluggish…if you’re used to SSDs. But since this laptop has an M.2 SSD slot, I don’t see any reason you should not install an SSD.

I did it on this laptop, and the performance improved by a lot! Boot times decreased by over 20 seconds, although it might vary depending on the SSD you choose. Apart from the added cost, there’s no reason that you should not get an SSD. Even a 128 GB SSD stick will do, and you can use it for the OS and the HDD for the storage.

With a 52 Watt-hour battery and the fact that it is a gaming laptop, you cannot expect much from it. After slightly more than 2.5 hours of using it to browse the web, stream, and some office tasks, it ran out of juice. So, for gaming, you’ll definitely need to plug it in.

The HP Pavilion Power 15 is a laptop, put together really well. This is a great choice for anyone who doesn’t want quite a dent in their pockets. At $650 for the 1050 Ti version, this looks like a great value for money. Add a small cost for an SSD, and it is still a great buy. Even in the Nepali market, you get the Ti version for Rs.98000, and the regular 1050 variant for Rs.92000. So, this laptop is an ideal choice for anyone looking for a good budget gaming laptop. Plus, this laptop has quite the room for upgradeability. You get two RAM slots but only one slot is used. So, this can go up to 32 GB. And of course, there is the M.2 SSD slot. Pretty good, if you want to upgrade your device later on.

It has got the power, the style, and just the right price. Everything looks pretty good to me. This is a perfect example of when a laptop does just the right things.