In this review, I’ll go through my experience of using HP Victus 15 for about a month. Last year, HP introduced a new lineup of affordable gaming laptops called Victus. The Victus 16 was the first device in the series and having used the AMD Advantage edition of that laptop for quite some time, I found it to be just decent—nothing much.

With this setup, the Victus 15 had no problem handling my daily workloads including opening up to 15 Chrome tabs, editing documents on LibreOffice, light editing on Photoshop, and listening to music on Spotify all at the same time. But of course, this laptop is not just meant for your typical everyday work. It’s a gaming machine with decent hardware to support it. 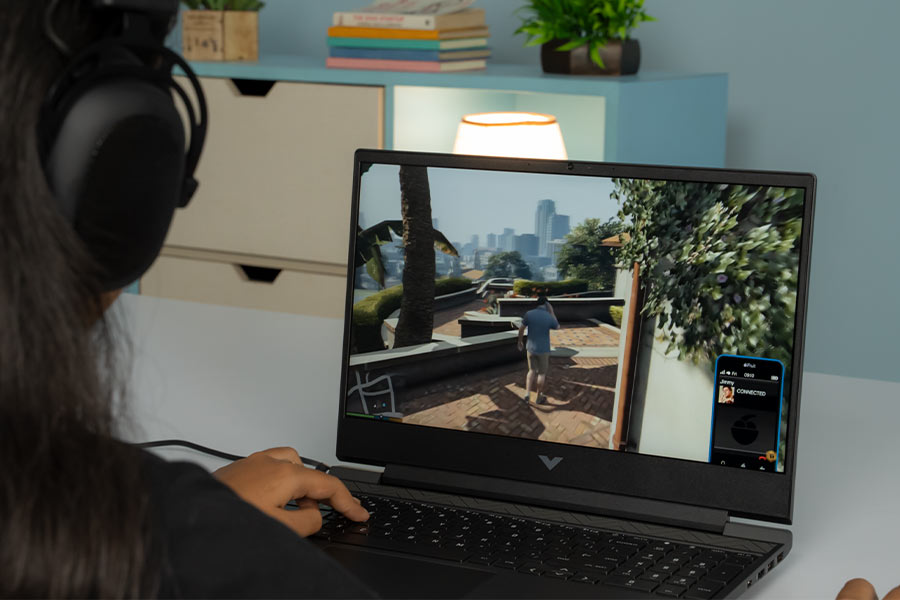 So, I tested its capabilities against a handful of AAA titles, and it performed comparatively better than last year’s Victus 16, especially in CPU-intensive games. This is to be expected from new Alder Lake processors because what matters most when it comes to a CPU’s gaming performance is its single-core performance, and this is where the 12th Gen CPUs shine the brightest.

For instance, just take a look at the Cinebench R23 scores of HP Victus from last year and this year’s model. While the multi-core scores are nearly similar, the Core i5-12450H wins by a significant margin in single-core performance. The Geekbench 5 scores show similar results as well.

So with games like CS: GO, I was able to get 143fps on average at high settings. Whereas last year’s Victus was averaging at around 90fps. Plus what I appreciate this time is that HP has included a 144Hz screen even on the base variant of the laptop. So, I haven’t faced any screen tearing issues I had with the 60Hz screen on Victus 16.

Likewise, another game that makes full use of this high refresh rate screen is Valorant. Here I got around 138.3 fps on average at the highest settings.

All in all, you can expect a good—if not great—gaming experience from the Victus 15. Another area where the laptop has made an impression on me is its thermal performance.

The fan noise gets a bit loud at its maximum speed but I think it’s well worth it given the comfortable gaming experience on the Victus 15. And the best part is that the keyboard itself stays relatively cool.

I noticed the laptop getting warm near the backspace key and above the keyboard deck. But it’s nothing alarming since the maximum surfaced temperature I recorded was around 47°C which is considerable in the summery days of August.

Also, I was surprised to see how good of an SSD HP has used here. It’s a PCIe Gen 4 SSD that can be easily replaced. But what’s really impressive here is the read and write performance of the pre-installed SSD card. It’s certainly among the best storage performance for a budget laptop I’ve ever seen. 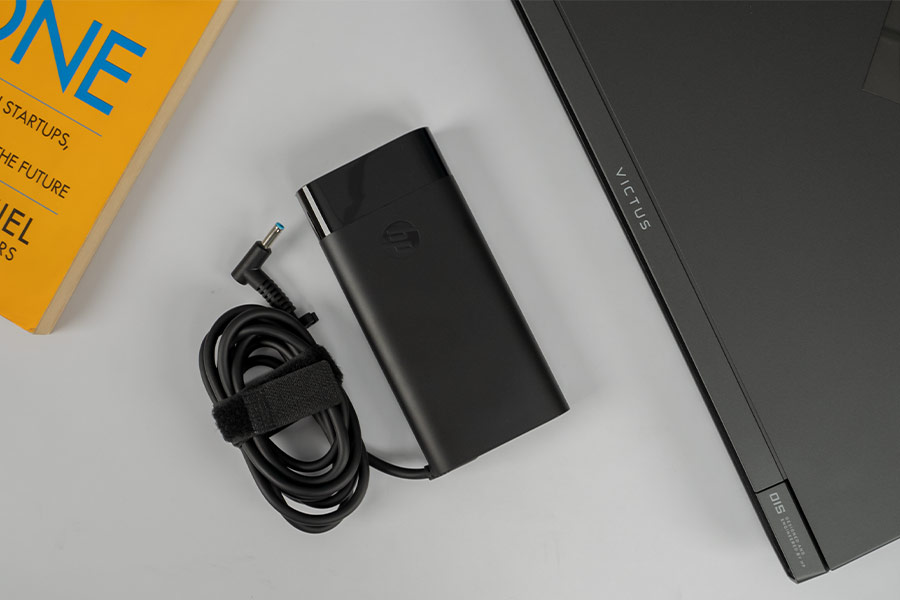 Besides performance, I also find the battery life on the Victus 15 to be slightly better than its predecessor. Compared to the 3 hours backup of the Victus 16, I was able to get around 4 to 4.5 hours of run time on my normal usage. This isn’t much of an improvement, but it’s certainly worth nothing for a gaming laptop. Charging it from 20% to 100% takes about 1 hour and 30 minutes with the compatible adapter.

Moving on, HP has made no significant design changes with the Victus 15. It still looks basic and feels almost the same as last year’s model. The only thing that disappoints me—as far as design goes—is that HP has not addressed the widespread criticism of the flimsy screen hinge issue in this year’s Victus lineup of laptops as well. So like last year’s model, the screen starts to wobble even with a slight tug on the laptop. On top of this, despite having a matte finish, the lid catches dust and fingerprints way too easily. So I have to carry around a piece of fabric so that I could wipe it clean. Oh, it’s bulky as well at around 2.30 kg, so you will definitely feel the heft while carrying it in the bag.

Regardless, the whole chassis feels fairly solid, with no flex in the keyboard until you press it very hard. Just above the keyboard deck, there is a wide strip of mesh that covers the stereo speakers setup. The air intake vent is in the rear, and the laptop exhausts hot air through the grille in the back. Similarly, all of the necessary I/O ports are located on the side of the laptop. Here on the left, you’ll find the power connector, a 3.5mm audio jack, a USB Type-A port, and a full-size SD card slot. And the right edge has HDMI, USB Type-A, USB Type-C, and Ethernet ports.  Aside from these normal I/O connections, it could’ve been great if HP had included a Thunderbolt port here. 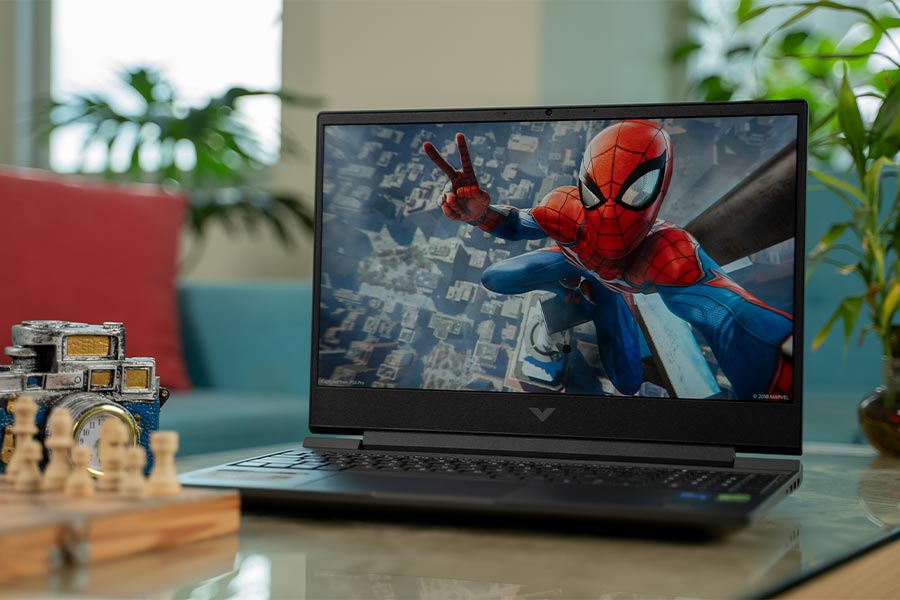 Anyways, what’s rather average on this HP Victus is its screen. Historically, affordable gaming laptops often go hand-in-hand with okay-ish or below-par screens and the Victus 15 is no exception.

The 15.6-inch IPS panel on this thing only covers 45% NTSC, 48% of the Adobe, and 47% P3 color gamuts. That means, if you’re a graphic designer and searching for an affordable gaming/content creation hybrid machine, you will have to look elsewhere. Besides colors, its brightness level is just about average as well.

Even when I’m sitting inside the office, I find myself cranking up the brightness to 60-70% quite often. So I measured its brightness with SpyderX, and it recorded the max brightness of about 243.3 nits. That was close enough number to the 250nits of brightness claimed by HP, but it’s still unlikely that you’ll be able to use this machine outside in a cafe while sipping your coffee. But being an IPS display, its viewing angle is quite decent though.

Still, to be fair, I haven’t really enjoyed watching content on this laptop, not only because of the average display but also because of the very mediocre speakers. The laptop has a dual-speaker system tuned by Bang & Olufsen. But, the bass is almost non-existent here, and the audio also gets slightly muddy in the mids as well.

Anyways, let’s talk about the keyboards now. It’s a full-sized keyboard with a dedicated Numpad. And the keys here are fairly comfortable to type on with a good travel distance. Unfortunately, you won’t find any RGB lighting here, but the white backlighting is enough to light up the keys at night or in dim lighting conditions. 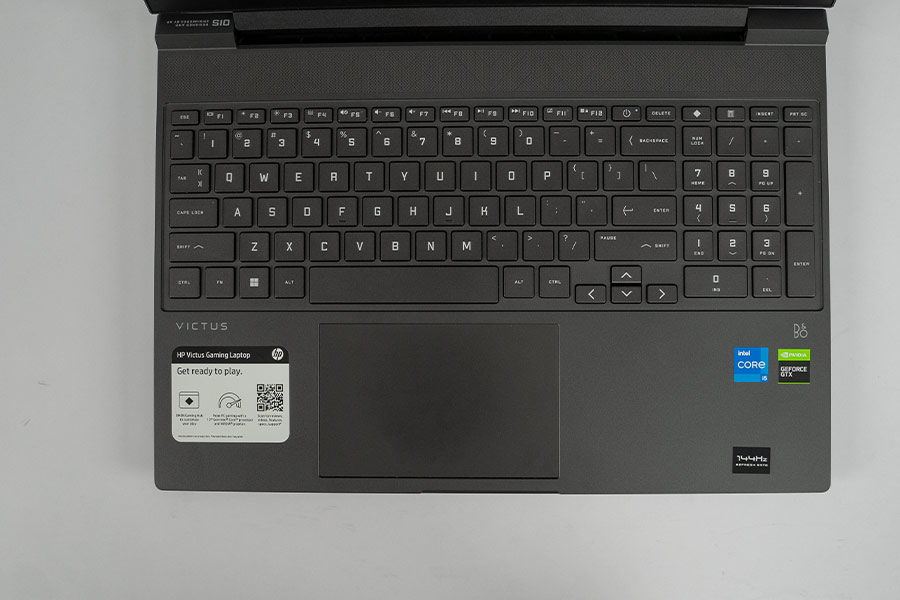 Like most Omen series laptops, HP has included all of the buttons in the same keyboard deck, along with the power button. So it does take some time to train your finger muscle for this power button so you don’t press it while typing. But I like the fact that you have to press this button with a bit more force to prevent the laptop from accidentally turning off.

Also, its trackpad serves you well for your daily tasks. It’s an off-center large trackpad, still, there’s enough space for your wrists to rest on either side while gliding into the screen. And even though this thing is plastic-made, it feels fairly smooth. Multi-finger gestures work perfectly fine as well. Finally, its webcam performs as one would expect from a laptop’s built-in camera. It’s a 720p sensor, so videos turn out to be a bit grainy and it performs terribly in exposure maintenance too. Yet, the audio pick-up from the built-in microphones is quite decent. Overall, the camera on this laptop is just fine for video conferencing—but you’ll need to shell out for a dedicated webcam if you’re into streaming.

So wrapping up this review, if you’re on the market looking for an entry-level gaming laptop with upgraded internals then the Victus 15 could actually offer a good value. It can easily run popular AAA titles, and the laptop also has good thermals to keep the temperature under control. Gaming aside, its mediocre display, basic design, and average battery life could be a dealbreaker to many.