Home HTC HTC U11+ and U11 Life with top specs launched 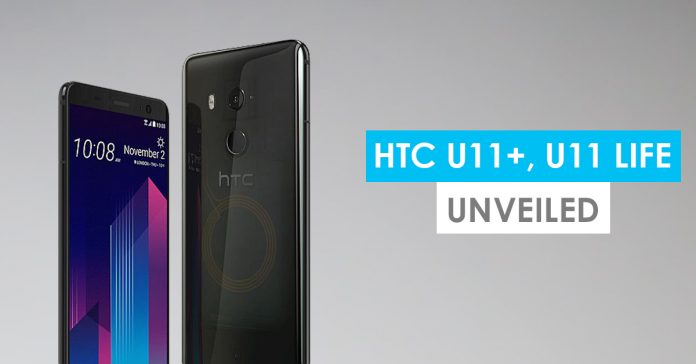 After weeks of speculations, HTC has finally launched two new smartphones of completely different price tags. This move comes at a time when HTC is trying to make a stand in the smartphone market it once had a fair share of. The HTC U11+ and U11 Life are the two smartphones HTC launched yesterday showcasing the fact that they are far from done with their mobile products.

The HTC U11+ screams 2017 with its features as the device has ditched the traditional display for a new and improved bezel-less design. This device was also on the run to become the new Google Pixel 2 XL’s design. The HTC U11+ has a 6-inch Super LCD display with 18:9 aspect ratio and 1440 x 2880 pixels of resolution. This display is protected by Corning Gorilla Glass 5. In terms of the hardware, the U11+ is powered by an Octa-core Qualcomm Snapdragon 835 processor and 6 or 4 GB of RAM. As for the GPU, HTC has included Adreno 540 in the device. The 64 GB storage variant has 4 GB of RAM while the 128 GB variant comes with 6 GB of RAM.

The HTC U11+ runs on the latest and greatest from Google – Android v8.0 Oreo. It supports memory expansion via a microSD card slot. The device has a rear-mounted fingerprint scanner engraved in the shiny glass back. It has a relatively big 3,930 mAh battery which, according to the manufacturer, can provide up to 25 hours of talk time on 3G. This battery is paired with Qualcomm Quick Charge 3.0. In terms of the camera, the HTC U11+ has a 12-megapixel rear-facing camera with f/1.7 aperture, OIS and dual tone LED flash. At the front sits an 8-megapixel front-facing camera with f/2.0 aperture. It is a bummer that HTC didn’t opt for dual camera lenses on the back. With the HTC U11+ comes a 30 percent louder bottom firing speaker which is also an upgrade from its predecessor – the HTC U11. This device is now IP68 certified meaning the device is more resistant to water and dust than the U11.

The HTC U11+ carries a price tag of £699. Sales will start from November 20th in the United Kingdom.

Another smartphone launched yesterday, the HTC U11 Life is the “lite” version of the HTC U11. This device is for the people who want the U11 but on a budget. It is priced at $349 and its sales start today in the international market. The U11 Life shares the same design with its big brother. There is a glossy glass on the back with an aluminum frame bringing the display and the rear portion together. It has a 5.2-inch full HD Super LCD display with the traditional 16:9 aspect ratio. It is IP67 certified. Under the hood, the HTC U11 Life comes with an Octa-core Qualcomm Snapdragon 630 processor with 2.2 GHz of clock speed. This processor is aided by 4 or 3 GB of RAM and Adreno 508 GPU. The 32 GB and 64 GB storage variant have 3 and 4 GB of RAM respectively. In terms of software, the HTC U11 Life will run on Android 7.1.1 Nougat out of the box with HTC Sense UI on top. Elsewhere, it will come with Android v8.0 Oreo right off the box and will function as Google’s Android One smartphone.

The device has 16-megapixel primary and secondary cameras, both featuring f/2.0 aperture. The HTC U11 Life is equipped with a front-mounted fingerprint scanner. It has a relatively small 2,600 mAh Li-Ion battery. Also, this battery can be charged via a Type-C connector with no fast charging in place.