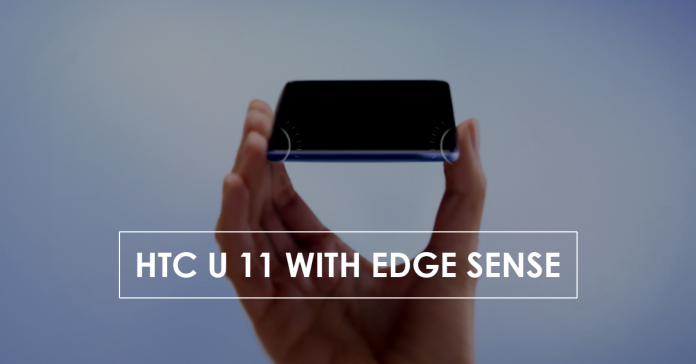 If you think the HTC U Ultra will be the flagship from HTC for 2017, then you are wrong. The HTC’s flagship for this year will be the HTC U 11. It will be the successor to last year’s HTC 10 but will be packing something unique with it. I don’t wanna keep much of suspense that something unique is the frame with “Edge Sense” that the phone will be having. Such frame design will sense the different pressure levels on the frame and will function accordingly. This can be solidified with the latest teaser video of the phone by the HTC. If you haven’t checked that teaser already, you may check it here:

Now the release date of the phone is official and it is on May 16, 2017. In case you’re counting the days left, it’s just 18 days away from now.

Though the release date isn’t that far, but still we can understand your urge of knowing the specs beforehand. That’s why we’ve tried compiling the rumored specs of the phone. The design of the phone will be somewhat similar to the HTC U ultra with shiny back and everything. But it’ll be distinct because of its touch-sensitive frame called the “Edge Sense“. The phone won’t have any secondary display or anything and is likely to come with a 5.5inch QuadHD display with sapphire glass protection. It’s still not sure whether it’ll be an LCD or AMOLED one.

The HTTC U 11 will be powered by Qualcomm Snapdragon 835 and will be coupled with 4GB RAM. The phone will have onboard storage of 64/128 GB. This memory will be expandable up to 256GB. The phone will have a 12Megapixel unit on the back that will have OIS and will shoot [email protected] For the front, mixed rumors are being heard. Neglecting the rumor of 8MP selfie unit, I believe it to be the 16MP selfie unit just like the one in HTC U Ultra. As far as the battery’s concerned, it will at least be of 3000mAh but we’d love to see something above that for a 5.5inch 1440p display. The phone will run on Android 7 Nougat with HTC Sense on top of it.

The phone will have capacitive buttons on either side of the fingerprint sensor that doubles as a home button. Just like the HTC U Ultra, the phone will ditch the 3.5mm headphone jack. The rumor claims the phone will have 4 microphones in total and will be capable of recording 3D sounds. No words have been heard regarding the speakers though.

I don’t know what you think about that “Edge Sense” technology the phone is bringing. But in case you wanna know, what I think about it, then I think it’ll be super gimmicky, period. Just imagine, squeezing your phone for some added functionality, that doesn’t sound handy at all. I tried squeezing my own phone and it felt super awkward, to be honest.